"Yes, the faith of all the Masai worries them : their tribe is in danger, let’s support them !" 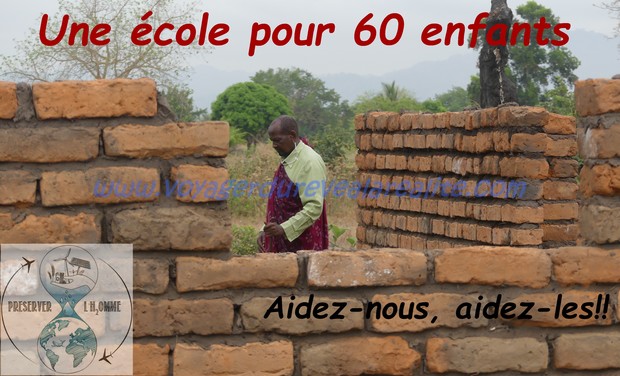 <p><strong><u>The survival of the Masai, a neglected and mistreated tribe</u></strong></p><p><em>Sarah and Ségo , two French women who had the chance to cross path with Ibrahim and to meet his Masai family. An extraordinary experience who gave them the desire to change things !</em></p><p><em>We invite you to have a look on </em><a target="_blank" href="http://voyagerdurevealarealite.com/index.php/qui-sommes-nous/sarah-sego/">our website.</a></p><p>Our meeting with Ibrahim and his family made us realize<strong> the necessity and urgency of the Masai situation. It is time to act, and fast!</strong></p><p> </p><p>Ibrahim and his family had the kindness to accommodate us in their home with open arms, within their village at IFAKARA, in the Morogoro region, in Tanzania. Being confronted to a new culture is very rewarding.</p><p><img alt="P1010586-1512102360" src="https://d3v4jsc54141g1.cloudfront.net/uploads/project_image/image/470689/P1010586-1512102360.JPG"></p><p> </p><p>We were extremely touched by Ibrahim’s project, who is trying his best to defend the Masai’s rights. We have decided to join his cause and try to support him with our limited means.</p><p>Let us guide you through our blog <a target="_blank" href="http://voyagerdurevealarealite.com/">by clicking here</a> to have an clearer idea on who are the Masai. And see if you too will feel the need, the wish, the will to come in aid to the Masai.</p><p>As you may have understood, there is a lot of political stake in the current situation, and we wish that by this fundraising, defend the rights of the Masai by supporting two of Ibrahim’s projects.</p><p>You will see it by viewing the two videos below, the Masai are asking for your support ! They are asking as well to the Tanzanian government to collaborate with them.</p><p>We invite you to click here to start viewing the videos. They are in Swahili but subtitled in English and French.</p><p> </p><p> </p><p><iframe src="//cdn.embedly.com/widgets/media.html?src=https%3A%2F%2Fwww.youtube.com%2Fembed%2FS-DzaqtAxrA%3Fwmode%3Dopaque%26feature%3Doembed&amp;wmode=opaque&amp;url=http%3A%2F%2Fwww.youtube.com%2Fwatch%3Fv%3DS-DzaqtAxrA&amp;image=https%3A%2F%2Fi.ytimg.com%2Fvi%2FS-DzaqtAxrA%2Fhqdefault.jpg&amp;key=cb39d84f05d8439bbe96012f078e02b0&amp;type=text%2Fhtml&amp;schema=youtube" width="540" height="304" frameborder="0" allowfullscreen=""></iframe></p><p> </p><p><iframe src="//cdn.embedly.com/widgets/media.html?src=https%3A%2F%2Fwww.youtube.com%2Fembed%2FzQCpsxlZZAs%3Fwmode%3Dopaque%26feature%3Doembed&amp;wmode=opaque&amp;url=http%3A%2F%2Fwww.youtube.com%2Fwatch%3Fv%3DzQCpsxlZZAs&amp;image=https%3A%2F%2Fi.ytimg.com%2Fvi%2FzQCpsxlZZAs%2Fhqdefault.jpg&amp;key=cb39d84f05d8439bbe96012f078e02b0&amp;type=text%2Fhtml&amp;schema=youtube" width="540" height="304" frameborder="0" allowfullscreen=""></iframe></p><p> </p><p><strong>How could you refuse to help a community in need ? How could you deny education to a population openly asking for it ? How could you turn your back to a whole tribe who wish to find a peaceful solution and to communicate with authorities?</strong></p><p> </p><p><strong><u>The Masai, an endanger tribe</u></strong></p><p> </p><p>Let us help the minorities of this world that are confronted to the crushing power of the government, that put in place a system to deny their rights</p><p> </p><p>The Masai people are a minority ethnic group, who need our support to fight against the current political stakes that are overtaking their rights bit by bit…</p><p> </p><p>Since 2013, the Masai are suffering intense political pressure as the government are trying to expropriate them.</p><p> </p><p>A majority of their land were already taken from them, and turned into huge national parks (Serengeti, Masai Mara, Ngorongoro etc…). And they were once colonized by the British and Germans.</p><p> </p><p>The Masai are fighting to maintain their rights and their way of living. They denied many incitement from the Kenyan and Tanzanian government, who wanted to impose them a sedentary lifestyle.</p><p> </p><p>The Masai have finally obtained the rights to feed their cattle in many places : Indeed, they live in harmony with nature ( by respecting the wildlife) and migrate depending on the season. Nonetheless, the Tanzanian Government, wish to take back this right!</p><p> </p><p>The Masai are very attached to their origins and their cultures, but they know how to take profit from the occidental society : in this way, some of them are educated and support their children to go to school. This is one of Ibrahim’s project : build a school or all of the children of fakara village! Currently, a certain amount of them have stopped school  because the closest one is situated 10km away from the village (I invite you to click on the this link to support this project).</p><p><img alt="P1010386-1512140081" src="https://d3v4jsc54141g1.cloudfront.net/uploads/project_image/image/470842/P1010386-1512140081.JPG"></p><p> </p><p>Since the colonial era, the Masai had a large amount of their land taken from them (because of farmers, governments, or by the construction of national parks) .</p><p> </p><p>The Kenyan and Tanzanian government have already tried many times to denaturalize them and, since, we have seen a significant reduction of the Masai population.</p><p> </p><p>Since 1993, the Masai are persecuted by the government who regularly set up campaigns to expropriate their land. It is time that for this to stop!</p><p> </p><p>In sum, the government is using the image of the Masai to attract occidental tourist (You can witness by yourself that their pictures are posted everywhere, as soon as you’re searching for touristic information about Tanzania), without redistributing them any profit in any way, while the tribe is suffering in silence about the government action.</p><p> </p><p>In 2014, after 20 years of fighting, the Masai community has called for help to the international community as a result of being forced out of their land and forced to sell their land. A worldwide petition has been issued, you can find it here (LINK) . You can as well find other information on the following website, who are working towards the protection of the Masai community :</p><p>-          NGO Survival International</p><p>-          La société pour les peuples en danger  </p><p> </p><p>The meeting with Ibrahim and his family gave us the will to support them, in whichever way we can. Staying in IFAKARA to build the school ourselves, would have been our wish : but it wouldn’t be much of a use as Ibrahim’s family doesn’t have the necessary funds as of today to buy the bricks and tools necessary for the construction.</p><p> </p><p>Internet being a fantastic tool, we have decided to start a crowdfunding campaign. Let us join our forces together so that the Masai children can study !</p><p><img alt="P1010306-1512137414" src="https://d3v4jsc54141g1.cloudfront.net/uploads/project_image/image/470819/P1010306-1512137414.JPG"></p><p> </p><p><img alt="P1000595-1512137469" src="https://d3v4jsc54141g1.cloudfront.net/uploads/project_image/image/470820/P1000595-1512137469.JPG"></p><p> </p><p><img alt="P1000788-1512137687" src="https://d3v4jsc54141g1.cloudfront.net/uploads/project_image/image/470821/P1000788-1512137687.JPG"></p><p> </p><p>Send your donation by clicking ….</p><p> </p><p>All donations are welcome : If you wish to give pens, chairs, tables, black board, chalks, notebooks, bag packs, rain boots, glasses, etc , we take all that can be of a use to the children.</p>

<p>Ibrahim is on every frontline ! He has many ideas to try and save his tribe: But to reach his goals he need support, especially funds. Ibrahim has 2 starting project :</p><p>-          The creation of a school for children of the IFAKARA village</p><p>-          The shooting of a video, which will reunite the Masai together, create a better communication among them so they can unite against the expropriation of the government.</p><p> </p><p>Through<a target="_blank" href="http://voyagerdurevealarealite.com/index.php/qui-sommes-nous/notre-association/">our association “preserver l’H2Omme” </a>we have chosen to support the Masai in their fight. The association will collect the totality of the funds and will commit itself to follow up the construction of the school and to keep its bissbankers posted if they so wish to.</p><p> </p><p>If the required funds are obtained, Ibrahim will receive it by the end of January and will start the process for the establishment of the school during February. Once the equipments are purchased, he has planned 3 months of labor construction. If no major problem is encountered, the school will be completed end of May - early June, so that the academic year can begin in July.</p><p> </p><p>If you too, you wish to support Ibrahim, his family, the children and all the Masai in Tanzania, thank you for participating in the fundraising that we are starting.</p><p> </p><p>You will find down below a first video where we present the point of view of Ibrahim’s father, who wish to create awareness among the Masai but you as well, the citizen of the world, no matter where you live.</p><p> </p><p>You will also find in a second video Ibrahim himself presenting :</p><p>-          His project of shooting a documentary which ahs for objective to unit the Masai among each other, so they can fight together against the actual political stake</p><p>-          His project to open a school in IFAKARA for 50 up to 6 children</p><p> </p><p>We hope that we have created awareness among you to fight for the Masai cause, and invite you to make a donation  (By clicking…)</p><p> </p><p>The global project is going to cost 13.000 €. To be sure to have at least a part of the budget, we decided in a first time, to collect only 6.800 €. You are allowed to give more than that. In case of, after that, we are going to make a second crowfunding (for the video project) because we believe we will able to gather the remaining 13.000 € ! </p><p> </p><p>We thank you for your attention and sincererly hope to have created awareness for the Masai cause (currently debated within the U.N) and we promise to keep you posted about Ibahim”s project : we will return in Tanzania, we hope, to witness the Masai children going to their new school.</p>