100 years after the Armenian Genocide, nine French members of the diaspora are walking in the footsteps of their ancestors in Turkey. 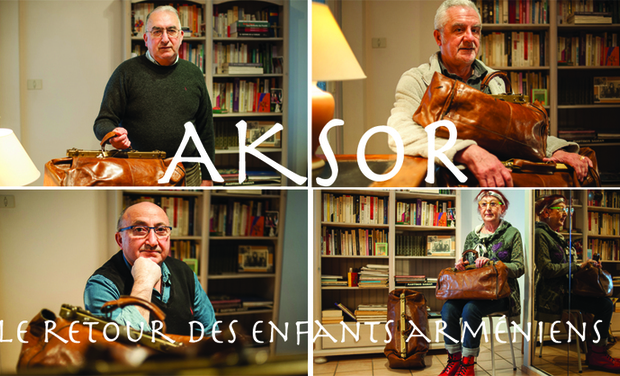 On the night of April 24th to 25th, 1915, between 235 and 270 intellectuals were arrested in Constantinople. Doctors, journalists, lawyers, politicians. Because they were Armenians, they are locked up, deported and then, for the most part, murdered. This « Bloody Sunday » marked the beginning of one of the worst tragic genocides of the twentieth century, which will résulted in the death of nearly 1.5 million Armenians.

One hundred years later, nine of them are going back to their homeland. Uprooted, though attached to a land that feels like home to them. Arpig, Edward, Annie… All of them are children and the grand children of genocide survivors. From Décines, also called "Little Armenia" in the Lyon suburbs, to the southeast of Turkey, in the heart of "historical Armenia", they travel in search of their identity and memory. For some, it is their 40th trip. For others, it is the first time… A hundred years later, they will walk in the footsteps of the Armenian genocide.

For two weeks, from April 12th until April 26th, 2015, a team of four independent journalists called We Report will follow the journey of nine individuals from the French Armenian diaspora through the south-eastern part of present-day Turkey. Starting in Adana, they will pass through the villages of Anatolia, in the heart of the « historical Armenia », all the way to Diyarbakir, the "capital" of Turkish Kurdistan. The journey will end in Istanbul for the Armenian Genocide Remembrance Day, still denied by the Turkish authorities.

The two-week trip will give the journalists the opportunity to work on a series of articles and multimedia material (text, image, sound, video) on the Armenian identity in Turkey by tackling the various issues of genocide recognition, islamized families, hidden children, devastated churches and Armenian taboo. Since the tragic murder, in 2007, of the Turkish-Armenian jounalist Hrant Dink, questions are starting to be raised about the Armenian genocide. The multimedia report is intended to be published in the French and European press in paper magazines as well as through web and radio media. The team collaborates with various European media, including Radio France Internationale (RFI), Mediapart, Slate, La Tribune de Genève and Les Inrockuptibles.

We Report is a collective of international freelance journalists created in July 2014.

A radio journalist, he was two years into the Armenian culture, while he was working for Radio Arménie, in Lyon (France). After a trip to Armenia in 2011, Jean-Baptiste covered the French Parliament debates about the "Boyer law", which aimed at criminalizing the denial of the Armenian genocide, in 2012. Two years ago, Jean-Baptiste moved to Roma where he keeps a careful eye on the news about the Armenian community. In the scope of this project, he will be in Istanbul to follow Turkish people who recently discovered their Armenian roots, and for whom April 24th will gain particular significance.

Reporter for radio, newspaper and television, co-funder of the collective We Report, Daphné Gastaldi collaborate with Radio France Internationale, France Télévisions, Slate or Lyon Capitale. Recently, she worked on various reports about migration in Europe. Influenced by her History studies, she is very interested in the question of distortion of the Armenian memory.

Freelance journalist since 2007, photographer and writer for this project, Pierre works about social subjects for L’Humanité, as well as nature and travel stories for national publications such as Terre sauvage, Alpes magazine and the Journal du WWF. Travelling and reporting are his motors.

Print and web journalist on the project, based in Lyon, freelance since 2011, Mathieu Martiniere works on social topics for the French press (Slate , Mediapart , RFI, Lyon Capitale) and European press (La Tribune de Genève, Die Zeit) . Mathieu specializes in immigration issues. He signed several stories about freedom of expression in Turkey for Les Inrockuptibles and The Mouv'.

The fund-raising will cover the costs of the story for the four journalists from We Report in Turkey, from April 12th until April 26th, 2015 (transport, accommodation, fixers).

If we happen to receive more than the initial amount, the extra money will be used to fund the development of  a webdocumentary and to organize exhibitions with the journalists and partners :  the Lyon Press Club, Profession pigiste and l’Atelier des Medias.

"Travel pack" : An inestimable gratitude + a subscription to a customized newsletter + a postal card signed from the descendants of the survivors of the genocide.

"International reporting pack" : An inestimable gratitude + a subscription to a customized newsletter + 2 numbered and signed pictures by the photograph Pierre Gouyou Beauchamps.