Help to fund a book, questioning the place of the body in the city through urban walks. Next step: DAKAR 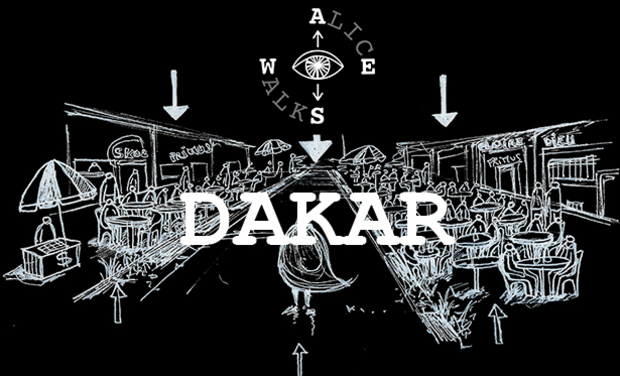 « ALICE WALKS » started in Johannesburg two years ago. A series of urban walks in the south-african city leaded to a BOOK: “Alice Walks in Jozi”.

With this project, I imagine that the city is a scenic space and the walking body a performer who communicates his intentions to an urban audience.

I work with mind-maps, photos, walks narratives... which constituted fragments of different walking experiences, all gathered in a publication.

Since, Alice Walks continued its path in Kinshasa, DRC in 2014, and will soon pursue in DAKAR, Senegal, from May 2016. Indeed, I am very lucky to be part of the “Village des Arts de Dakar” art residency, a creative and art research center.

Alice Walks, it’s also me, Alice. I am a stage designer and a performer, passionate about cities. My practice is strongly focused on urban spaces and on the way we choose to inhabit those spaces and express our subjectivity within those spaces.

In parallel of Alice Walks publications, I create art performances in public space. Most of the time it’s about simply walking in the street, but making it performative thanks to my appearance: costumes, props, objects, an unusual behavior…

Alice Walks is an urban-walk project, questioning the place of the body in different urban contexts, mainly post-colonial. It spots daily urban performances, pointing out specific uses of bodies and/in urban spaces. Thus, this project claims a form of freedom of being and expression in the city.

It consists of walking with people I encounter in the streets, to follow them for a little while and discuss these TIME/SPACES/BODIES that we cross. Step by step, walking, shifting bodies and thoughts, creating a trilogue between our individual identity, another’s identity, and the (ephemeral) identity of the city.

Consequently to this research phase, I restitute those experiences, working with mapmaking, words, collage and pictures, and communicate these with a publication. I also perform a walk, inspired by what I observed in the urban landscape.

The walking body in urban spaces carries messages, meaning it communicates. It communicates individual and urban identities. It communicates a state of the city. Moreover, the action of walking connects our interiority with the outside world, expressing our culture, our desires, our fears, our history, our relationship with others.

This walking body has the particular power of being able to weave the numerous (human) networks constituting the city.

It’s interesting to connect the walk in the city to theater and performance: How do we appear in the city? What do we communicate? What is our visibility level? Who is watching? What is our state of consciousness related to bodies (including ours) and spaces around us? Who are we? Where do we come from? Why are we walking ? With which purpose ? To sum up, if the city is a stage, how do we stage our Self?

Just like performers participate to structure their scenic spaces, people structure urban spaces reciprocally. The city is in a constant dialogue with its inhabitants. Both are working with/on each other, negotiating their spaces within confines and freedom.

- Start of my research: Where do I choose to walk? Why? With who?

- As a foreigner, what does my body communicate in Dakar?

- What does the city communicate to me? Which impacts? Which effects?

- Early design of an art performance in Dakar ‘streets.

Help me to improve the quality of the next publication!

Tsunami of hearts and love. Your name in the Thank you page

2 mind-maps and 1 photograph from Alice Walks in DAKAR - Your name in the THANK YOU page .