Support the first music festival in Goma! And participate in the revival of the music capital of Eastern DR Congo. 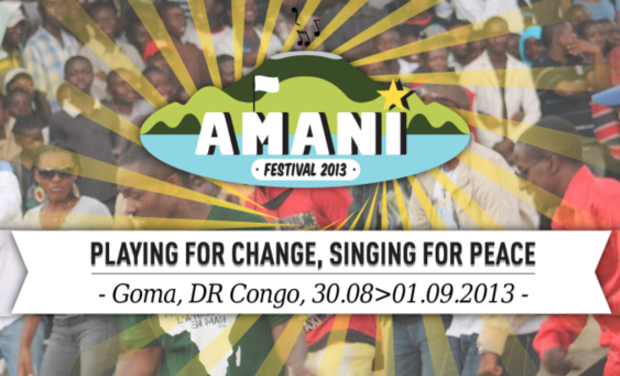 A music festival in Goma?

Goma is a city of 1 million people nested between Lake Kivu and the Virunga volcanoes, right in the heart of Africa. You may have heard about it; in the past few years the media has associated Goma with war crimes, mass displacement and never-ending violence.

All this never has prevented musicians from playing and creating music. Earlier this year, the Guardian called Goma “Congo's hidden cultural hub” and the Courrier International praised its “boiling musical scene”.

Yet, you will find no music festival in Goma and there are actually not many spaces where the public can discover musicians and the artists perform.

Our idea is pretty simple; we will organise a 3-day music festival in Goma between August 30th and September 1st, 2013. The festival will be a unique stage for local and international artists and an occasion for people from Goma and everywhere else to discover musicians and rejoice.

But… do you guys realise there is a war raging a few kilometres north of Goma?

We do. Most of the organisers of the festival live in Goma. We are monitoring the security situation very closely and we hope the situation will have improved by the end of August.

In any case, we believe Goma can be known for something other than violence. We do not want to wait anymore, there is musical talent in Goma now. The festival is called “Amani”, the Swahili word for “peace” and this is part of our point: music soothes the soul and brings people together.

It isn't. The idea of organising the festival comes from long-time friends from DRC and Belgium who have been meeting in Goma for years: Guillaume Baguna and Eric de Lamotte.

They were soon joined by volunteers (mostly from Goma but also from a handful of countries) and the Goma Cultural Centre – Youth Club.

NGOs, businesses, the UN and the Congolese authorities support our idea but they are not the organisers of the festival.

The First Lady of DR Congo, Maman Olive, recently agreed to sponsor the event as well.

Who is going to be there?

The programme is already full! It will be revealed at the end of July, when we will have all the confirmations – check out our website/facebook/twitter.

We have artists coming from the whole region, including four superstars who accepted to be the godfathers of this first edition: Youssoupha, Pitcho, Fredy Massamba and Lexxus Legal.

There is also a “Goma has talent”-like competition that is currently organised by the Youth Club of Goma: seven of its laureates will sing at the festival. Congolese music, Hip-hop, traditional vibes from the region, and mixes of all these and more will be the main styles represented.

Sure! Everybody is welcome. If you come from outside the Great Lakes region, the easiest is usually to land in Kigali and then catch a bus to Gisenyi/Goma. We look forward to see you. We would be very glad to hear people coming from far away only for the festival so if you do so – do come to the organising team and say hi!

Well, not quite. Euro 10,000 is a first target to help us cover the expenses of renting very basic equipment. The more money we raise the more we will be in a position to increase the concert experience with quality equipment and side events such as movies and meetings between the public and the artists (right now, we have writers pushing to create an event for them!).

We have been working on the project for quite a few months now. We secured sponsorship from a few industries and organisations but we are still short of a third of our budget. We need you to support our project and talk about it to your friends.

And what if I support you?

Thank you very much. You just gained a free entrance for the festival. If you pledge at least Euro 15 you are also entitled a t-shirt of the festival*. The more you pledge, the best our gifts (look right to see all the rewards).

* All rewards can be withdrawn from one of our volunteers in London, Oxford, Paris, Brussels, Liege, Madrid, Rome, Bujumbura, Kigali, Goma. We will add cities according to demand - international shipping at your expenses remains possible. And please do not forget to tell us your size and gender for the t-shirt!

Imagine the festival makes profits - where are they going?

Thank you for thinking our festival has the potential to become a profit-making event! The festival is designed as non-profit in the eventuality we actually make money, it would go to the Youth Club of Goma that co-organises the festival. The club may use that money to organise another edition of the festival in 2014 if the first edition proves successful. We dream to make this a yearly event.

How can I remain in touch with you?

Amani Music Festival will be no less than a historical event. It is a unique occasion to show the world than Eastern Congo is worth much better than a battlefield, a chance to discover incredibly talented musicians and an opportunity to gather people around three days of  festivities.

We are receiving an increasing attention and a handful of international media have already planned to come to and report from the festival.

However, as mentioned earlier, we are all volunteers and still short on the budget to organise the festival in the best conditions. We are counting on you. Help us make a difference. Help us make this happen. And spread the word.

Une entrée au Festival // One entry ticket for the Festival

Le t-shirt signé par tous les 4 chanteurs vedette du festival + un de nos chanteurs star vous DEDICACERA UNE CHANSON durant le festival! (nous filmerons l'évènement) // The t-shirt signed by all our four star singers + one of our four start signer will DEDICATE A SONG TO YOU during the concert! (we will film it for you!)