You can help Candy Robbers record their 2nd EP this summer! 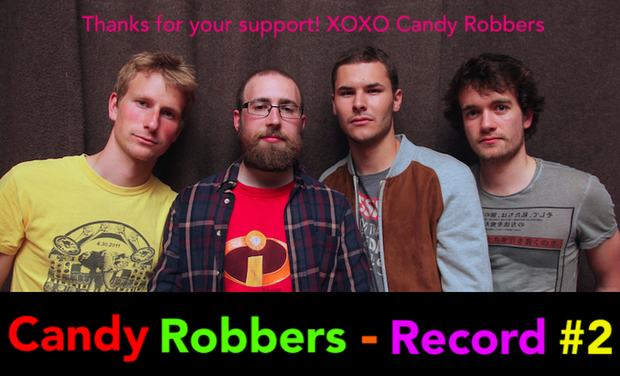 With your support, our goal is to make a hip, fresh-sounding pop record:

1. That you will love

2. That will make a BIG SPLASH on the music scene

3. That will land a deal with a top-notch booking agency, so that we can tour extensively through out the world (hopefully, somewhere near you)

4. That will allow us to live off the music we make so that we can ultimately make more music for you!

With lots of NEW songs written and 2 new band members, we are ready to record our 2nd 6-track EP as of August this year! To accomplish this, we need 16 days of studio time.

Will you join us on this adventure?

You can support our project now through KissKissBankBank.

Here's a quick recap of the last 18 months of Candy Robbers history:

In 2013, with the help of a foundation, our friends and families, we were able to produce independently our 1st EP (released in January 2014) and our 1st music video.

In November 2013, the music video of our debut single 1000 Miles was released, and was among the 13 videos by Belgian artists (such as Balthazar, Robbing Millions, Great Mountain Fire, and Stromae) nominated by Brussels’ CLIP that BEAT music video festival. 1000 Miles was well-received and has since cumulated close to 10,000 views on YouTube.

(The tracks Oscillations & Sorry are featured on our 1st EP, also available on Spotify & iTunes.)

In January 2014, following the release of our self-titled debut EP, we were featured in Sound of Boston's local spotlight. Our EP was also included in Brussels Airlines' long haul inflight entertainment program for several months.

The 1st EP has sold well at Candy Robbers concerts (on average 30 CDs per concert) & has received airtime on various independent radio stations. In June, we came 1st place in Iris Festival's emerging Belgian band contest receiving over 3000 votes. In addition to playing concerts in bars and clubs around Belgium, we have been preparing NEW material.

So who's in Candy Robbers' team?

For a detailed plan and timeline, please click on the following link:

Looking at the document above, however, you may have noticed that we need more than the sum for which we have asked. The process from A to Z requires about 13000 EUR total. Therefore, any surpluses, as a result of exceeding the 5400 EUR target, will go towards, mixing, mastering, CD cover design, and CD printing.