CARAVANE - Paris/Damas/Tokyo - A dialogue in paint - We met in november 2009 at a painters’ symposium at Raqqa in Syria. 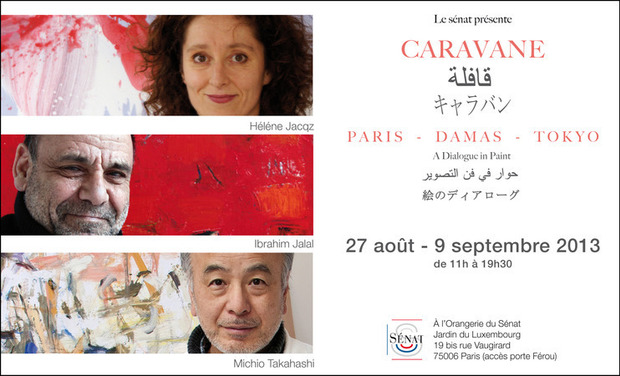 In November 2009, we met at a painters’ symposium at Raqqa in Syria. Among the thirty or so artists from Syria and from some neighboring Arab countries, each one of us painted freely on the hill of Jabar.

The sun was shining, the west wind was blowing and the horrors of civil war were not yet visible.

In spite of our different origins, our works were the expression of some affinity, as if the desert and the Silk Road were promoting a crossing of our paths.

Sunset light and canvas on the floor

During the last three days in Damascus, we visited the museums and our colleagues’ateliers.

In the evenings, drinking tea, our discussions turned to artistic news and the idea that Art is based on universal values. We believe that the diversity of cultural legacies is not a hindrance to these values but on the contrary, essential.

In 2011, during the Nuit Blanche in Paris, on the banks of the river Seine, following a key discussion on the approach to contemporary art and the meager part being left to painting, we decided to create a groupe “Caravan”, messenger of our desire to share our vision. Like a challenge to the new academism of current trends.

We hope that new caravans will join us on this Silk Road, the road to the «self».

We dedicate this project to our Syrian friends,  wishing to meet once again in Syria with peace.

The common point shared by Helen Jacqz, Ibrahim Jalal and Michio Takahashi is not only to live in France, while extending their distinct cultural traditions. It is that they chose a demanding mode of expression - painting - in their case marked by an obvious spirituality.   "Spirituality" in the sense that Kandinsky gave to this word in "The Spiritual in Art", without referring to any given religious tradition. All three present meditative works, slowly thought and matured, that offer to the eyes a support for reflection.

- Rapid and spontaneous gestures in Helen Jacqz’ large canvasses, open to the beauty resulting from the chance meeting of dynamic forms, traces of a flight achieving a delicate balance between dance and acrobatics;

- Great depth in the pictures of Ibrahim Jalal, whose slow genesis, and hidden layers are revealed only gradually, after careful observation;

- Lightness and elegance, finally, in Takahashi’s work, like the superposition of light veils,  pale and silky illusion of transparency, but also signs marking the milestones of a secret itinerary.

Among the many trends of contemporary art and its contradicting propositions, Jalal, Jacqz and Takahashi, painters of refined tradition, sometimes feel like in a desert. That’s why they have formed this group they called Caravan. I hope this caravan will go a long way, providing to all those who follow it the joys of a rare and poetic adventure.

For this exhibition at the Orangerie du Luxembourg, we will have a space of 200 m2 with about 50 linear meters of exhibition in a beautiful natural light.

We are planning to show about fifty works with several very large formats.

The simple start of this project for presenting our work and finding places for exhibitions has already cost us over 2000 euros.

A year ago, as suggested by Michio, we developed and printed a "Workbook", which presents the project, our itinerary and reproductions of our work. It is partly due to this work that we have been selected for the program "Summer in the Senate."

This booklet is accompanied by a letter (attached above) and a text by Marc Albert Levin, an art critic who supports our approach.

All texts, initially in French, have been translated into English and Japanese. We expect a funding support for the Arabic translation and communication with the media. We would like this exhibition to take place not only in France but also in Japan and Arab countries, eventually reinforced by the participation of other artists who would share our vision of painting as irreplaceable medium of expression.

Please find attached the draft of a provisional budget:

- Installation costs for the transformation of Orangerie: 1200

-  Organization of the opening / brunch

receive our heartfelt thanks, an invitation to the opening of the exhibition, the catalogue and the poster

receive our heartfelt thanks, an invitation to the opening of the exhibition, the dedicated catalogue and the poster of the show

receive our heartfelt thanks, an invitation to the opening of the exhibition, the dedicated catalogue and the poster of the show and a private visite commented by the artists

receive our heartfelt thanks, an invitation to the opening, the poster, dedicated, the catalog and an original work of one of the three artists inserted in the catalog

For 400 € and more receive our heartfelt thanks, an invitation to the opening, the poster, the catalog and an original work you choose, for the amount of your donation with the artist of your choice