Support the ecotouristic initiative of a native mongol by offering him a photographic and video coverage to promote his project! 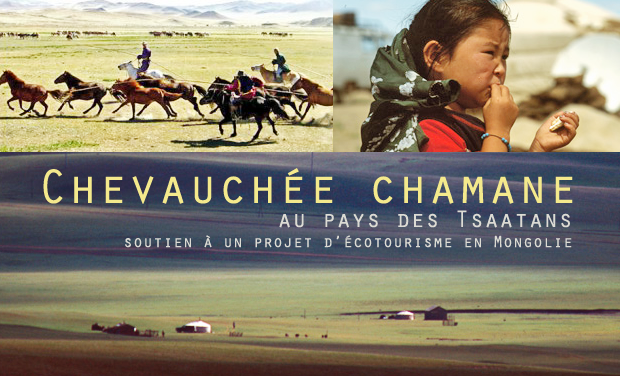 Support the ecotouristic initiative of a young mongol entrepreneur by offering him a professional photographic and video coverage that will help him promoting his project! These media, witnesses of his cultural heritage, will allow him to share his universe with an international clientele so he could, in the end, live from his touristic activities.

My project: support of the ecotouristic initiative of a native mongol

Amgalan is a young mongol entrepreneur, and an skilled guide in his native country.

His dream: offering to travellers an genuine two weeks experience, during which they will, at his side, encounter the Tsaatans, a nomadic people that breed reindeers. You can discover his tour my following this link

My intervention: I wish to go with Amgalan during the first test of this route, and to realize a photographic and video coverage of the Tsaatans people. Once the images and the documentary will be ready, they will be given to Amgalan for free so that he will use it for communicating and meeting travellers that would be interested by this tour. Later, I will also publish these resources on Native Immersion (a portal that gathers genuine tours in immersion with native people) to promote the organization of conferences, exhibits, and the broadcasting of the movie. In collaboration with with a producing partner, the documentary will also be broadcasted on TV, will be a part of several festivals and will be shown in one or several movie theaters. This large media coverage will make internationaly visible the local initiative of Amgalan.

I am Aurélie Mayoke Debusschère, a 29 years old photographer and travel designer.

Captivated by the First Nations since my childhood, I live for part of the year in immersion in native american reserves. I realize here photographic and video reports, for everyone to understand the way of living of native populations and to promote the protection of their heritage. I also participate in the development of table, durable and responsible touristic structures in these communities, where unemployment reaches 70%, to create jobs and protect their culture. You can have an overlook of my photographic work here, and read a more detailed biography there.

The story of Native Immersion

My experience with native populations, in North America and in Madagascar, made me realize that many people have, locally, the will and the ideas to share their culture and heritage to a greater audience. Initiatives of ecotourism projects issuing directly from the local populations are an emerging trend. Unfortunately, this offer of reponsible, fair trade or committed way of travelling often originate in a associative framework that do not benefit from an image as attractive as the one of big tour operators. Moreover, the native people are generally the ones that have less financial resources to promote their own culture and use it as a long term economic development tool.

This is why I created the web portal Native Immersion: at the heart of native culture. The objective of this website is to gather information about genuine tours within indigenous communities, organized, guided and sold by native people worldwide.

To stack all the odds in Amgalan's favour, who wants to develop his activities, I take charge of the shooting, editing and diffusion fees in their entirety. I appeal to your generosity only to fund my plane ticket and the one of Juliane, my assistant on this project. Juliane will be in charge of several technical tasks, including the sound recording during the shooting, and the preparation of the equestrian equipment. We also have to rent the sound recording equipment, this is included in this fund raising. Therefore, the entrepreneur will have nothing to pay to benefit from our helpin hand.

If your generosity exceed the minimal sum that we need, these additional contributions will be first used to ensure the attendance of Amgalan at the preview showing of the documentary in France, so that he could talk in person about his story and project. Then, these contributions will be used to buy shooting and sound recording equipment that will complete the one I already have. For example, I could invest in a steadycam, a set of lapel microphones and/or a portable slider. This equipment will be used to promote Amgalan's project as well as similar initatives from other native entrepreneurs.

Thank you for supporting our team!