On the week end of 12th to 14th September , the party will go on in a gorgeous castle in Puisseguin Saint-Emilion. 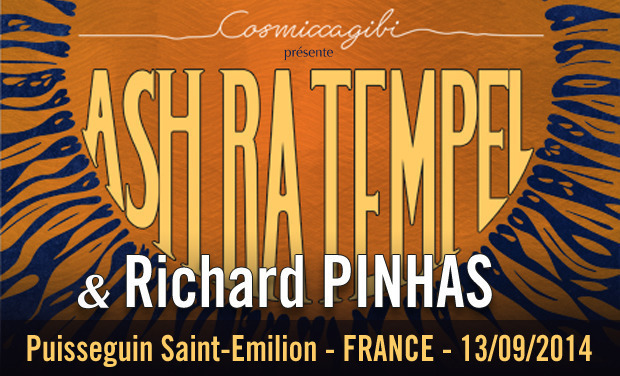 Cosmiccagibi is an association law 1901 which aims to promote the origins of electronic music. Established in 1994 this year we celebrate our 20th anniversary of our support for the music of Klaus Schulze, Tangerine Dream, Popol Vuh.... We wish to mark the occasion by inviting one of the leading groups from this period of electronic tumult : ASH RA TEMPEL We have chosen the location setting the bar high by proposing a unique and privileged site. A XIV century castle set in an area close to Saint-Emilion, in Gironde.

A quality event set in motion by a team of professionals to ensure putting on a big spread.

Cosmiccagibi offers you the possibility of attending a concert event on Saturday evening September 13th kicking off at 5 p.m with the duo Delia Plissken (Fr) / Camizole 1975 / Richard Pinhas Solo and then Ash Ra Tempel (All).

On top of that we are offering to a Privilaged 80 (VIP guests) the exclusivity to share 3 days in the life of the bands members.

A private concert will be held in the Main Room of the castle on friday evening with a welcoming aperitif and dinner.   The Privilège Pass also includes 3 meals , visits to famous castles and wine sellers.   The broadcasting of Philippe Garrel's movie "Le Berceau de Cristal" is in itself an event !  The band Ash Ra Tempel composed the music for  this cult movie in 1975. For the first time in France the movie will be shown in "Ciné-Concert" with the band.  (not allowed to kids under 12 years old)

Chateau Langlais (long time named "Chateau de Puisseguin) is a massive castle the foundations dating back to the year 1300. A unique and fascinating site overhanging a valley of Saint-Emilion countryside. Since 1947 the castle produce a very well-made organic wine Appellation Puisseguin Saint Emilion. One of the owners was a pirate working for french government Corsaire Martineau. He had ask famous Viollet Le Duc to reorganise the castle. The architecture and interiors are sober and minimalist which gives it a raw and mineral aspect. A veritable plunge into a setting of golden stone.

Doors Open at 6 p.m. Take-away food and drink available on the site.

A duet melting german power to some raw soundtracks roots and a french kick !

In 1975 Camizole is an electronic duet, synthesizers, organ who played numerous festivals in France. A sound board recording was done on a K7 tape at the Soleymieux Festival near St.Etienne. This tape was given to Klaus Schulze at his home in Hamburhen who found the music great and figure it's could be possible to help the band but the duet split soon after this live recording.

39 years later this tape resurface and after a little cleaning in a studio the original music of Camizole 1975 is now available.

Composer, guitarist and electronics innovator Richard Pinhas is recognized as one of France's major experimental musicians. A pivotal figure in the international development of electronic rock music, Pinhas' stature in France is analogous to Tangerine Dream's in Germany: the father figure of an entire musical movement.

The pioneering, aggressive music produced by his band Heldon during the 1970s, fusing electronics, guitar and rock, heralded the industrial and techno to come and remains today vital and unsurpassed.

Richard Pinhas has been touring all over the world from USA to Japan.

He offer us the great opportunity to play in South of France as he hasn't been there since a long time.

The band changes rather quickly as Klaus Schulze leaves them after their first album.  In 1975, Manuel Göttsching collaborates with Lutz Ulbrich. Ash Ra Tempel becomes a duo.

Noticed at a concert at the Cannes film Festival, Philippe Garrel suggests that they put the  music to the images of his new movie "Le Berceau de Cristal".

The movie quickly becomes a cult along with the music which was never released at the time.

Manuel Göttsching is considered by those of his generation and of the younger generation as one of the best guitar players in the world, playing as well on his own as with a band. He created in 1981 the highlight album "E2-E4".

Spend a weekend sharing, exchanging in a private and unique space time together with the musicians.

- A private concert with all the musicians

Doors Open at 6 p.m.. Welcomed by musicians and the Cosmiccagibi team. Apértif and Dinner !

Meeting at 11 a.m at the castle in it's wine cellar "Chateau Beauséjour". Wine tasting.

2 p.m : Departure for Saint-Emilion (guided by one of the musicians...)

Visit to a castle in Saint-Emilion's and visit of the village.

Meeting at 11 a.m at the castle for a going-away party with the musicians.

Pick-up of your traditional "picnic basket" for your trip back.

Schedules may change. Offers do not include accommodation.

A detailed list of the accomodation in the periphery will be supplied.

The crowdfunding will serve to finance these diverse posts :