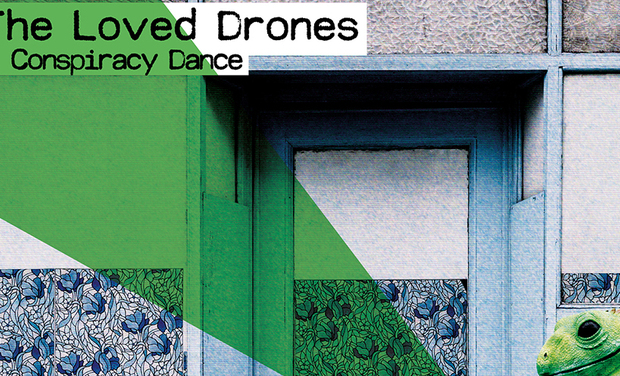 This October sees the release of the new album by The Loved Drones – ‘Conspiracy Dance’. It’s the fourth record from the Belgian psychedelic band, a floating collective headed by Freaksville Records creator Benjamin Schoos. This album is a departure from their previous predominantly instrumental soundscapes, moving more into song-based structures, but still retaining the improvised spaced-out style of its predecessors. As ever, the band draws on its nucleus of diverse and eclectic musicians with occasional guest contributors (Man From Uranus, Jeronimo).

Keyboardist (and Englishman) Brian Carney takes on lead-vocal duties for the first time, propelling the band into ever stranger dimensions and styles. The album is a heady voyage through stoned psychedelia (‘Lights’, ‘Headhand’), surf-guitar (‘The Day That Bryan Gregory Died’), Krautrock (‘My Name is Sky’, ‘A Firework Exploding’) and skewed pop (‘Conspiracy Dance’, ‘Quarantine’).

The album was recorded over a four-year period, and started life as a series of jamming sessions in various studios with various members. As the songs organically evolved, further sessions followed (with some vocals improvised in the studio), and in 2020 preliminary mixes were sent back and forth between Schoos and Carney, who added more vocal ideas.

Carney – “Belgium was in a state of lockdown but I was allowed out for “exercise”, so every day I would walk for hours with the songs on an i-pod until inspiration struck. The city was deserted; an eerie haunting stillness hung in the air, which definitely contributed to some of the subject matter and themes.”

Carney, who was synth-player for twelve years with freak-rockers, ‘Poisoned Electrick Head’ before relocating to Belgium, even added words and ideas from over thirty years ago to some songs – “When I worked in the Dead Fly Studios in the UK in the late 80s, I would experiment late at night, “Naked Lunch-style” with stream-of-consciousness writing on a battered typewriter. Thankfully I kept this frazzled text all these years, and some of it made it onto the album”.

Lyrically the album explores themes of alien invasion, laughing (and dancing) in the face of imminent apocalypse, mortality, revenge and controlling your own destiny. There’s even a homage to the late Cramps guitarist Bryan Gregory – “I heard Jerome Mardaga’s twangy surf guitar and Gregory’s enigmatic face appeared in my mind!”

Sadly guitarist Marc Wathieu (aka Marc Morgan), a successful solo artist in his own right in France and Belgium, died in January of this year and never saw the album reach fruition. It remains his last recorded work, and was lovingly engineered in part by his son Maxime.

Within the album’s grooves you can hear elements of The Cure, Neu, Sonic Youth, Dick Dale and even The Specials! The result is an intoxicating brew of the best of underground music filtered through a Belgian sensibility and given an English twist!

Belgium is quite rightly the home of Surrealism and The Loved Drones are back to prove it! Conspiracy Dance is released on Freaksville Records.

Freaksville Records is a Belgian-based indie french pop label. More than a label, it's a family of french music lovers, musicians, illustrators, producers, artists, lyricists from Belgium and foreign countries. Freaksville sounds different in the small world of indie rock music. This campaign will help to master, print vinyl and promote the record all around the world !