Help Primary Voice take their first exhibition to Phnom Penh, Cambodia! Problem with backing us ? Back with Paypal http://tiny.cc/BackCU 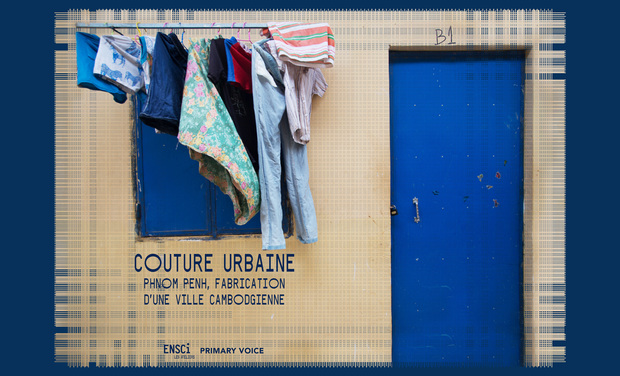 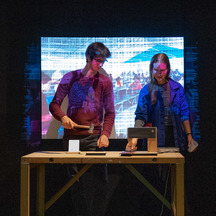 Primary Voice is an interdisciplinary design studio that gives a voice to cities invisible inhabitants through interactive media.

We are invited to participate in the citywide festival Currents in Phnom Penh and we need your help to get there! With our first exhibition Couture Urbaine we present the everyday lives of factory workers in Cambodia’s capitol.

This  interactive exhibition also retraces the making of Cambodia’s capitol beginning with the French protectorate (1863-1953), highlighting the ever-present relationship between global forces and Cambodia. Couture Urbaine is born from over four years of research conducted by Primary Voice, a design studio that valorizes the invisible voice, namely industrial workers of mass production in Asia. This exhibition was recently presented in November 2018 at ENSCI­–Les Ateliers in Paris.

These immersive devices launch you into the workers lives.

Primary Voice is invited to participate in the Currents Festival in Phnom Penh, Cambodia from March 18-31, 2019. Couture Urbaine will be on exhibit at Orussey Market, one of Phnom Penh’s major community hubs. We’d also like to hold a collaborative workshop with Cambodian design students and their community along side the exhibition. This festival–as part of a regional South Asian project called Topography of Mirror Cities–is curated by renowned Cambodian artist Vuth Lyno and architect Pen Sereypagna. The Currents Festival brings together artists, architects, urbanists, performers, academics, students, filmmakers and city residents to engage, share, and propose the ways of understanding the communities and cities we inhabit.

Primary Voice is a social documentary project that uses new forms of media to engage a wide range of audiences. Started in 2014 by Mikaela Kvan, the practice has been interested in bearing witness to radical urban transformations by documenting the lives of industrial workers as they move from their rural origins in countries throughout Asia and, in particular, Cambodia. At its roots Primary Voice aims to give voice to those who are typically overlooked and to remove as much distance as possible between those who speak and those who watch.

Primary Voice has previously been supported by the generosity of the India-China Institute at The New School and the Starr Foundation.

Mikaela Kvan is a designer and researcher. She earned her bachelors degree in Urban Design from Parsons The New School for Design. In 2017 she started her studies in industrial design at ENSCI-Les Ateliers. She has published, exhibited and presented her work with Primary Voice in the USA and abroad.

Sok Chanrado is a filmmaker based in Phnom Penh, Cambodia. He completed his training at SaSa Art Projects and Bophana Audiovisual Resource Center in Cambodia. He films has been presented in Phnom Penh, Tokyo, Singapore, Geneva, Paris and New York City. He has been working with Primary Voice since its beginning.

Mathieu Eymeoud continues his training in industrial design at ENSCI-Les Ateliers after finishing a degree in information technology at the Paris Sorbonne. For Primary Voice he is collaborating in the development of a interactive and dynamic exhibition.

Jean-Alex Quach is a student at ENSCI-Les Ateliers. He has worked as a volunteer designer for the world renowned Cambodian NGO Friends International based in Phnom Penh. Jean-Alex is collaborating in the development of this exhibitions graphic design.

We need your help to fund this project. The festival is from March 18-31, so we count on having the following expense:

Together we can surpass this goal!

With 3000€ we can invest in materials for our collaborative workshops (Arduino, Impressions 3D, exhibition set up…). At the end we can them donate these items to local schools and universities in Phnom Penh.

With 4000€ we can achieve all of this plus an exhibition of our collaborative work in France upon our return.

It is up to you to decide!

Thank you for your generosity!

Contributor: a series of pictures from Phnom Penh

You are a generous person! We will send you a series of photos from Phnom Penh.

Support: invitation to a presentation

You'll receive an invitation to a presentation upon our return from Cambodia.

Contributor: We will list you as a sponsor on our promotional material.

We will list you as a sponsor on all of our official promotional material. Thank you for your generosity!

Contributor: a catalogue of the exhibit

Thanks a lot! You'll receive a beautiful photo calendar of our time in Phnom Penh to hang in the office or at home.

Thanks for your contribution we were able to buy one flight ticket. We will bring you a beautiful artisan-made gift from Cambodia.

A huge thanks! The Primary Voice team would be ecstatic to meet you over a yummy lunch in Paris to share our experience.