What Solutions for the XXI th century Democracy? GET INVOLVED IN THE DeMoS XXI EXPERIENCE – Your Citizen Web Platform 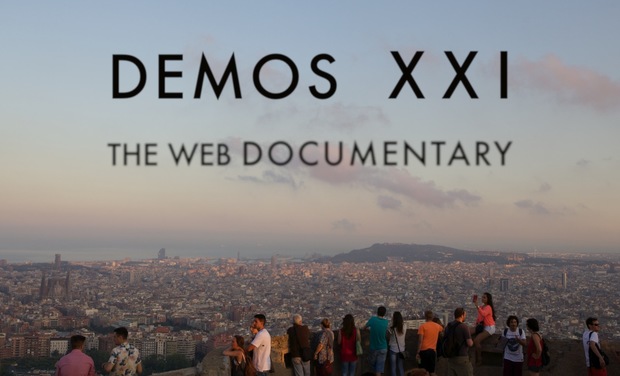 REDESIGNING DEMOCRACY IS POSSIBLE. LET'S START BY INNOVATING IDEAS, PEOPLE AND TOOLS THAT IMPROVE OUR DEMOCRACIES WITH ‘DEMOS XXI’ – THE WEB DOCUMENTARY

NEWS/ Thanks to Michel Bauwens, Founder of the P2P Foundation, for his support.

“As many recent events have made clear, such as the recent agreement with the Greek government, representative democracy is in a deep crisis, yet at the same time, we see a tremendous revival of self-organisation and therefore democracy in practice, emerging from civil society. Hence, we need bridges from the innovation and experimentation coming from civil society (including major technological innovations), back towards the formal world of politics and representation. Democracy can only be renewed and made real again, if the advanced practices of civil society can become the new normal for our political societies.

This is why a research and documentary project like DEMOSXXI deserves our full support.!” Michel Bauwens

Imagine a world where transparency becomes the norm. A world where Collective Intelligence is used to increase the social good.

Imagine a society where politics is no longer a platform for personal agendas or party corruption; rather, a governance that truly represents the interests of its citizens.

Imagine a world where power is shared by everybody and not selfishly appropriated by the self-appointed few.

Imagine a society where decisions can be debated by all, where every person has his/her place in the discussion.

Imagine a world where the word Democracy takes back all its meaning.

Is this World possible?

The answer is in our hands. We have to decide today about the great society and political system of tomorrow. DEMOS XXI transports us to this new world where the 21st century Democracy is being designed. Our journey will take us to meet with ideas, people and tools of different societies who are reinventing Democracy in the Internet Era all around the globe.

Those changes start with regular citizens and continue with you, with all of us. To inform and connect, sharing knowledge, is the essence of DEMOS XXI. This platform can be used by every citizen that is concerned about building a better Democracy.

As Matt Leighninger affirms in his book The Next form of Democracy: “In the 20th century, public life revolved around government; in the 21st century, it will center on citizens.”

Why is DEMOS XXI important?

None of the current political frameworks has been able to resolve the crisis that our societies are facing. Primarily affected by political machinations, we, the citizens, have been effectively excluded from the political process. Often our only recourse is to take action by voting typically every four to five years to elect our representatives who, with each passing day, are losing legitimacy especially if we refer to the record abstention rates, massive demonstrations, etc.

One thing appears evident: our systems are no longer adapted to this century's realities. Together we can change the rules of the political game and reinvent the terms between representatives and the electorate. To do so, the solution is evident -- open the dialogue.

By offering easy access to information regarding this matter, DEMOS XXI posits about the future of Democracy.

With YOUR participation, using an innovative media-platform, online analytic-tools will be used to encourage genuine dialogue and debate of your political and social concerns, providing a barometer to be used as an instrument for reforming governance.

The Story of DEMOS XXI

Tired of waiting, citizens came together to go from indignation to action in different parts of the world. People are creating movements and developing digital tools that will allow them to build a new Democracy, their Democracy.

The rise of “Democratic Labs” is playing an essential role in the evolution of our systems. These new frameworks are making citizen-participation possible by pioneering tools and political models.

Collective Intelligence complements the biggest disruptor-tool of our time: the Internet.

Starting often at a local or municipal level, connectivity finally transcends distant borders, ethnic origins, social conditions and political allegiance. Every citizen, in his/her own way, is helping build the edifice for the 21th century Democracy. By inventing the next generation of democratic tools, citizens are again placing people in the heart of the decision-making process and to give a more human face to our system.

In the past, most citizens were not involved in the traditional political game. Today, instead, people have decided to promote change from the inside, leveraging these media tools. For example, in as little as two years, Barcelona’s political party “en Comu” and their candidate Ada Colau went from having obscurity to winning the mayoral race of Spain’s second largest city. Their efforts were supported by an online campaign that provided a forum for citizens to participate in local politics, when their voices would have otherwise gone unheard.

What are they experiencing?

Ideas are seeds to every revolution. The challenge is to provide an effective conduit to create meaningful dialogue and debate. By forming new political frameworks in using these media tools, citizens are speaking out and defining their own governance.

None of them pretends to have ‘the solution,’ but at least they are transforming their ideas into actions and exploring the relevance of their tools.

For this project, DEMOS XXI will focus on seven new and existing political-frameworks in five different countries. These documentaries will allow us to picture and understand actual democratic tendencies.

In the rubric ‘Citizen Questions,’ DEMOS XXI will uncover concepts that are crucial to the terms of Democratic Innovations, which include Network Democracy, Big Data, Open Democracy, CrowdSourcing, Electronic Vote and more than ten key questions that will be explained by some of the best specialists.

Why a Web Documentary?

Flexibility, Interactivity, Freedom are the main reasons that convinced us to chose this broadcast format. A format, in accordance with our time. DEMOS XXI offers an online forum that includes knowledge-based resources, information sharing and dialogue exchange. The platform will be composed by four main sections.

One Movement = One video documentary portrait of about 15 minutes.

One Question = One short video that explains the concept in an accessible and easy way.

Knowledge base and Tutorials about the latest Digital Tools regarding governance and citizen participation.

A crowdsourcing based map! Interactions with users will generate anonymous data in order to offer a global vision of different citizen preoccupations all around the world.

The web documentary will be available in three languages (English, Spanish, French) because DEMOS XXI is for all audiences. At the end of the documentary, the credits will list and connect the best examples of Democratic Innovations.

This project started with a crazy precept: different and better democracies are actually possible. Starting from this conceit, we've decided to explore interesting political frameworks that could ultimately be used to redefine our own system of governance.

Where to do we begin?

Our journey has already started in Argentina where we've heard of a new organization, El Partido de la Red, which means literally “The Network Party.” We wanted to know if their ideas and proposals were providing real change. After a few video interviews with different members of the organization, we were left convinced that their governmental structure was truly unique and deserved further exploration for everyone to consider.

…and they are not alone!

Your participation will help us create the first Web Documentary listing for the new Democratic tendencies of this century!

You can make the difference by c ontributing to the future of our Democracy.

A few words about the Team

25 years in the audiovisual business. 10 years of documentary experience.

His interests are motivated by emerging methods of filmmaking for web documentaries and by the freedom by which this medium has to offer. His passion of observing societal changes – people watching! – makes him determined to put a real human face in describing our society’s condition, so much so, he was led to join Ryslaine and the DEMOS XXI project.

Picture this: in 2011, marked by a renewed hope with different protests all over the world, this movement decided to halt an old system entrenched in political malfeasance. A mighty wave of inspiring uprising seemed imminent – and then, nothing. Poof! What happened to those thousands of indignant people? Convinced that these events were rooted to a deep and real need for change, she decided to take interest in what drove these fledgling, media-driven democracies. Therefore, with the same spirit that ignited nations to reform, she founded the DEMOS XXI project.

Provide to all the people a free access to our web platform. We want to produce a independant content to inform you of the latest Democratic Innovations. To do so, we need your help to finance this project in a transparent way and keep it Free. And more important, DEMOS XXI is an informative web platform that belongs to you and needs your help to be achieved.

How will be use your money?

Production, Post-Production and other ancillary costs – we are making a web documentary! among other things. This kind of project is costly, so we plan to allocate your contributions to cover mainly travel, equipment and website expenses. Our fundraising goal was determined by the necessary amount of monies to finish shooting and to get an interactive media-platform of good quality.

Do you want to make a difference? So help and support us to realize DEMOS XXI. More than just a contribution, your patronage will send a strong signal, and will serve to stimulate a real discussion in how we choose our Democracy. So let's do it together!

Thanks so much for your help!