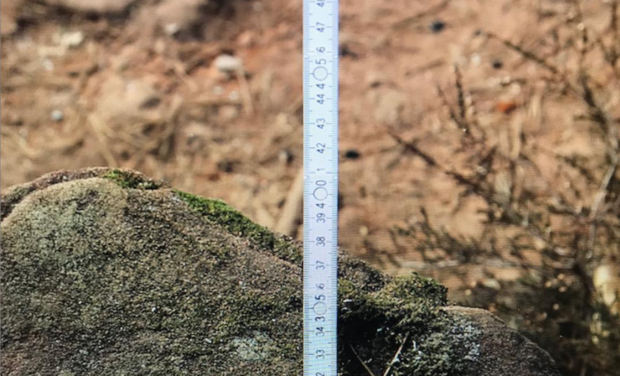 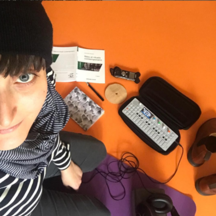 Under what conditions can the human scale of the world still be given by our body?

Everything started from the desire to mark, step by step, an unknown pagan rite, the Schieweschlawe (solar pagan festival of equinox of spring, practiced now the first Sunday after Mardi Gras in Offwiller - where we throw discs of inflamed woods at dusk). To listen to it, to record in images and sounds the gestures and the words which unfold in the territory of Offwiller, in the Northern Vosges, taking the space and the time necessary to apprehend the scales and the relations complexes that are drawn there. Worked in co-creation with the inhabitants of Offwiller and students of the Diemeringen College, Échelle / Massstab / Scala reports on this intangible heritage once common to the entire Rhine basin area (fr / all / switzerland / ita) and proposes a plastic reading of this moment that connects (to others, to ancestors, to spaces, to times, to the earthly and celestial).

"So for the discus throw, we pick up a stick of about 1.50 meters in hazel wood, because it is a stick that bends easily (...) Then you have to have a disc of wood (.. .), put this disc on the stick, then put all that in a big fire, lit on the hill, until the disc caught fire, until it glows, when it glows, the staff is seized and pulled out of the fire, the stick is held and rotated a little so that the disk remains blazing, then we go to a rock, a rock which is inclined towards the sky, and we strike with the stick on the rock and when hit, the disc escapes to the sky, and normally, if it works well, flies away to the sky, high in the sky, and the more the disc flies high , the more we will be happy, they say, or we said, so it is also ... Some even make vows, before they hit the disc on the rock, they make wishes and if the disq It is said that this wish will be granted in the year. When the disc escapes, (...) it looks like ... luminous trails, as they say in French, in the sky, and there is a special atmosphere that night. "

ÉCHELLE / MASSSTAB / SCALA it is:

- a work of sound recordings (concrete sounds and interviews in French and Alsatian) started in January 2018, in the village of Offwiller with the forces of the territory that perpetuate this rite. I participated, recorder in hand and camera around the neck, to the preparations for the annual festival (collecting wood with the men of the village), I captured the making of wooden discs, and went to meet during several weeks of winter, villagers who participate in the success of this exceptional evening.

- a photographic work film and digital from artifacts of the rite and meetings made.
- a work of co-creation with students from Diemeringen (40km from Offwiller), who did not know this pagan festival, and who was discovered by my side and alongside their teachers and educational teams, through outings on site (visit of the site dedicated to the rite, visit of the museum of the village - house of Offwiller), interview with villagers, and through joint works (sound creation, improvisations with the orchestra class, digital photography and rayogrammes, drawing , ...) with the 4th, 5th and 3rd classes as well as young people from the Diemeringen Medical Education Institute. A first exhibition in June 2018 in the college allowed students to discover all the work done.

- a work of sound sculpture: I try to repeat testimonials about the discus throwing on a disc of beech wood audible on turntables. This "low-tech" research is made possible thanks to a residence with Ensembles 2.2 at Shadok, a digital factory in Strasbourg and thanks to Jérémie Wojtowicz (Hackstub). (In progress)

This preliminary work was made possible thanks to the support of the Regional Natural Park of the Northern Vosges (residence), the Academic Delegation to the Cultural Action of the Strasbourg Academy (school residence in Diemeringen), Ensembles 2.2 and of the OLCA - Greater East Region. Many thanks also to the DSAA team Le Corbusier and Alexis Gunkel for his investment in the project and to the Shadok team for his advice. Thanks to the Diemeringen College team and Oh Well.

Now, I'm in the post-production phase and preparing for the first exhibition dedicated to this project at the Offwiller Museum.

It will be launched on the day of the Schieweschlawe rite on Sunday, March 10, 2019 at 16:00. It will be an opportunity to share with the villagers and students - to let them discover what I have created with their words and actions. It will also be an opportunity to share the culture of this rite with the curious of all horizons, welcome! After the opening, we can climb the Schiewebarri and throw "records" together!

1. GESTURE is a sound creation based on the concrete sounds inherent in the rite, from orchestral improvisations and sound effects made with the students and acoustic and electronic creations with 4 hands (Marine Froeliger + Janick Deneux). GESTURE repeats the phases of the rite in a linear way. We worked on writing composition with students.

2. WORDS is a sound creation based on interviews conducted in 2018 in Offwiller (solo or with students). Chase the winter? Fertilize the space? Raise good harvests? It is above all a form of symbollic investigation linked to this gesture perpetuated by tradition and pleasure.

These two sound tracks will be spatialized with two sound systems that will complement each other.
GESTURE will be broadcast at 360 °, WORDS will, as for it, to discover in a less direct way.

• Digital photographic prints and silver stripes laminated on dibonds.
• digital photographs on screen
• a vinyl turntable, a specially-edited vinyl felt, an engraved beech wood disc (audible grooves on a turntable).
• a mediation device in the form of an interactive sound table made with students from the Diemeringen College
• a micro-edition retracing the stages of the project as a whole (process)
• Schlawe, a sculpture / instrument with sensor made from artifacts from the rite used for sound creation:

• a preview of the upcoming LP vinyl limited edition:
Face A: GESTURE
Face B: WORDS
The vinyl box will include an inner poster, and will be composed from texts and photographs.

The collection allows me:
• Publish the sound pieces "LE GESTE" and "LA PAROLE" on vinyls (limited copies) with inside poster and access to the pieces in digital version, in order to give a copy to each of the young participants:
The pressing / engraving work will be done by a specialized company, a digital version will also be included in the vinyl box (download card). Nearly 90 young people were involved in the realization of this project; by supporting, you allow them to leave a beautiful object with images, texts and sound in memory of our beautiful common experience in 2018:

• To consider a qualitative sound diffusion within the framework of the exhibition of the project at the museum of the village (March 10th - September 30th, 2019) and for the exhibitions to be followed elsewhere in France and abroad (All / Sui / Ita) :
- speaker Elipson Bell 4 199 euros

3500 euros are needed to reach the finalization of my project, I count on your support, even minimal! Thank you in advance !

If the pot exceeds 3500 euros, I could:
• Pay for the graphic work of the vinyl wallet and the inner poster 600 euros
• Remunerate the technical aid work done with to get to regraver sound on 1 disk in beech 200 euros
• Pay the Sdrm (rights, vinyl edition)
• Engage in networking to spread this artistic work across the Rhine Basin (fr / all / sui / ita)

1 multiple "earth / sky", vector drawings printed on felt, Marine Froeliger, 2019. front: 7 throwing stones back: constellations The stars represented on one of the faces include the starry night portion of February 18, 2018 visible from the site of the rite, "Schiewebarri" (Mountain of the disks) in Offwiller. The center of the felt is close to the polar star. Thus, when you put your turntable in reading mode, the sky will appear and you will be able to modulate the speed of the "race of the stars". printed in France, in partnership with Mafeutrine.fr

The 2 pieces LE GESTE et LA PAROLE engraved on a transparent LP vinyl record. Face A: GESTURE, 12 ' Face B: WORDS, 12 ' simple pouch, back pinched. + 1 poster 60x90cm, with folds, taking photographs and texts from my project. test pressing, pressing / engraving / printing in France. + 1 poster (folded) with photographs and texts out of the project. + 1 multiple "earth / sky", vector drawings printed on felt, Marine Froeliger, 2019. front: 7 throwing stones back: constellations The stars represented on one of the faces include the starry night portion of February 18, 2018 visible from the site of the rite, "Schiewebarri" (Mountain Records) in Offwiller. The center of the felt is close to the polar star. Thus, when you put your turntable in reading mode, the sky will appear and you will be able to modulate the speed of the "race of the stars". printed in France, in partnership with Mafeutrine.fr

1 "disk" rayogram, silver print on matte paper laminated on dibond. Each print is unique and is created from artifacts of the rite. 12 prints are available. Format 18x23 cm approximately, thickness 2mm, with attachment. non-contractual illustration photo; the prints will all be laminated on dibond in a professional laboratory.

"Pierre au lendemain"(Overnight stone), 1 large mat print of approximately 150x110cm representing one of the 7 launching stones, photographed in the wake of the rite, with traces of residual ash from flaming discs. Unique. Dibond laminated paper, 4mm thick with aluminum U-clip. Draw and lamination in a professional laboratory.