Support the photographic work of two young freedivers in Alaska and allow the filmmaking of their adventure!

July in Alaska. Millions of salmon are expected by all: grizzlies, orcas, sharks and...young freediver photographers!

Appreciating wildlife, enjoying encounters with nature and rediscovering those sensations which first guided them in their lifestyle…that’s why Paul and Thomas are here. These two marine biologist are not here for research but to offer you a feast for the eyes and to share thrilling sensations !

Bears are everywhere. Eagles too. But that’s just the tip of the iceberg, already well exploited. Underwater is another race perhaps more intense, more secret… Salmon sharks, arriving massively from California, are here to get their piece of the (salmon) cake – and it’s a big piece of it. They look like their cousin the great white, smaller but no less impressive as they jump to catch their prey: they can raise their body temperature up to 20°C more than the water temperature, allowing them to be faster than any other fish around. But we are not fish are we ? let’s get in their midst and freedive to take some footage !

And there is more. In these dark green waters, between kelp forests and deep seas other predators are roaming like the sea otters, seals, whales and killer-whales. And upon closer inspection there is a tinier world of life too : gobies, sea urchin, shrimps, sea slugs, jellyfish and others are the resident treasures all year long.

What a thrill…those colors, those shapes and seascapes. So many things to see, experience, film, photograph and share. All these things so rarely seen by men, in a world where few have gone below the water.

But ... we will have yet to reach the Fjords and before that we will have a mountain to climb! From the glacier, descend the river, to meet fishing bears...but we will show you all this!

This is the aim of the expedition! Bring incredible images and a film that follows the journey of these two freedivers to share with as many as possible! To freeze our butt off for you ... so you can enjoy it from the comfort of your chair and perhaps give you the urge to leave for these lands!

Share these encounters with us, discover these immense spaces and the magical sensations experienced when you meet the gaze of these little-known animals...

The team: Who is who here?

4 nature lovers, each crazier than the other, lovers of open spaces, large animals but also tiny ones!

Thomas discovered the ocean depths early in life, during a sailing trip of several years. His first encounter with a shark earned him a scolding as, mesmerized by the silhouette of a gliding shark, he followed it in the open sea, dangerously far from the boat. Today a Ph.D. in marine biology, specialized in biodiversity, genetics and evolution and specialized on sharks, he has travelled across the oceans for scientific research and practice of photography. A proficient diver and freediver, he never descends without his camera in its housing. Having won numerous awards in underwater photography, his passion for extraordinary encounters and sharing them remain intact.

After a first trip to Alaska a few years ago, he now wishes to capture the spirit of the place and experience a special encounter with salmon sharks. An elusive animal, unique in its biological characteristics and the environment in which it operates, this meeting promises to be unforgettable.

It is at the age of 16 that Paul meets an orca for the first time, the beginning of a long fascination, during a solitary initiation expedition along the coast of British Columbia. A surprise encounter with a male 5 times larger than himself, appearing and meeting his gaze during a dive, marked the beginning of an unusual journey, filled with intense and extraordinary experiences with these animals whose every behavioural characteristic he learns.

Having recently earned his doctorate in marine biology, with his thesis focused on the killer whale population around the sub-Antarctic islands of Crozet, his research focus today is on the feeding ecology and conservation of marine mammals. This led to the mastery of a wide variety of animal approach techniques, especially in the underwater world.

An experienced wildlife photographer, exceptional encounters made during his expeditions to the remotest and wildest places in the world have allowed him to produce pictures as intimate as they are esthetic, earning him numerous publications. Alaska is among his favourite destinations and it is there that he hopes to find the privacy of those special orcas, including the great male he knows well and saw disappear in the green waters of the fjords during a final snorkelling descent, 6 years ago already...

Kévin Peyrusse : Co-director of the film, underwater cameraman or suspended in a harness

Always fascinated by the underwater world, its inhabitants and their adaptations, it is as a spear fisherman that he began to explore the depths, and quickly swapped his speargun for a camera!

From a background in marine biology research, he redirected to a school of wildlife documentary to learn to film, record sound, edit and mix. An infinitely rewarding experience, he has as much fun behind the camera as when meeting and discussing new projects. A tinkerer and observer, he is interested in anything that might enable him to make new images: launched cameras, electronic platforms, drones or pulley systems ... anything goes (and sometimes breaks!).

Film is a way for him to better express his feelings and to better share what nature gives us: playing with light, working the frame to draw us into the scene with sublime ambient sounds enhanced by emotional music.

Hugo Braconnier : Co-director of the film, cameraman and soundman

An outstanding handyman, he spent his childhood building carriages, observing and understanding animals to better approach them. Born in the middle of Gâtine farmland, he explored every nook and cranny to discover all its secrets : from crystalline amphibian pools to the woodpecker hammered treetops. His calm and respectful approach to nature allowed him to witness rare and impressive behaviour. Accompanied by his brother, with whom he shares this passion for nature, he began to explore new lands in all seasons: climbing mountains at dawn to glimpse the capercaillie, through old-growth forests on the trail of wolves and bears or to find one of their few neighbours on the other side of the world: the genet!

His poetic outlook and original style allows for beauty: a silhouette, detail or décor that take on all their meaning as they pass behind his lens ...

So we created our association: Sedna (Inuit Goddess) - Services and Expedition for Discovering NAture in order to be better prepared! We did the scouting, contacted the researchers on site or cameramen who have already dived in these waters, prepared our itinerary, wrote this story we would like to tell you, prepared a list of equipment etc.. In order to achieve the most beautiful underwater images and not to scare the animals, we chose the freediving approach but to shoot (and take our time) quietly we will take a rebreather. What is a rebreather? it is a machine that you put in your back and allows you to scuba-dive without making bubbles! Animals can be approached and come to see the new big beasts! But this requires a lot of logistics ... but don't worry we have planned everything!

The project is launched, all we need is to go! And for this we need you!!

The program is ready, we have found great partners giving us access to the diving and shooting equipment needed to make a great film.

But we still lack a lot of the funds needed to realize this project, funds that would allow us:

1 - Especially to send all this material (filming and diving) by air, to hire additional diving equipment on-site: weights, rebreather cylinders, oxygen for safety, what we need to be transported by local fishermen... (about half of the budget requested)

2 - To this is added the purchase of 6 Lacie 2TB hard drives, because we plan on recording a lot of materiel, and we will have to store it all! (About 1000 €)

3 – And because we aim to continue the adventure even after Alaska, sharing this experience with the widest possible audience: As much as for adult enthusiasts or novices as for the delight of children's eyes and ears!

The rest of the budget will be allocated to the promotion of this expedition and sharing it with you:

=> Making a movie widely screened at nature, environment and adventure festivals, editing a DVD, setting up a photo exhibition, lectures, presentations and discussions ...

We have already planned two previews (Marseille and Brest) and a series of lectures to tell this adventure!

Beyond that, it is in the field that we would like to share this experience with you: we pulled out all the stops for contributions, offering diving, photography lessons, aperitifs... this project will have more value if we can share it directly with you!

4 - To all this is added the commission of the site (8% of the amount requested) and tight deadlines! We're going to need you, so please share info, talk to those around you and participate in the project!

Bonus: if you go wild and we exceed the sum, we plan to buy a small drone and a steadicam to take aerial images! 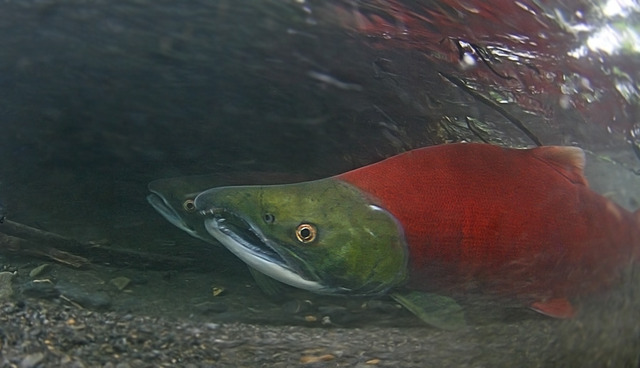 A very big thank you! + a salmon fishbone + a hair of a bear (or, if none of a team member) + a DVD of the film autographed + your name in the credits!