Eternity Has No Door Of Escape

"Eternity Has No Door of Escape" is an invitation to explore the history of Art brut and delve into its enigmatic, irrational beauty. 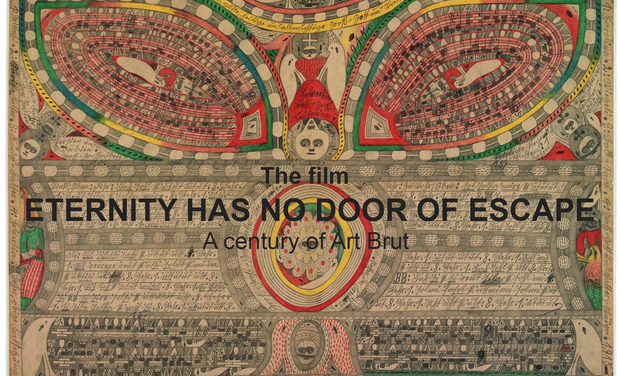 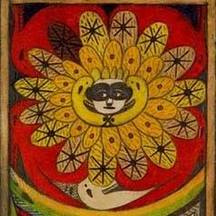 Eternity Has No Door Of Escape

How Did the Project Come About?

“You think you are making a trip, but soon it is making —or unmaking —you”, wrote Nicolas Bouvier. When I boarded this flight from Venice to Paris in July 2015, little did I know that this trip would be the source of one the greatest aesthetic and intellectual shocks of my life.

That’s when I met Raphael Koenig, a Harvard Ph.D. student who told me he was writing his dissertation about Art brut.

His explanations piqued my curiosity, and in the following days I started gathering information about this “Art brut” I knew virtually nothing about.

Adolf Wölfli and Henry Darger were my first guides. When I discovered their respective visual universes, I was immediately overwhelmed with a joy, an intensity, a sense of truth that I had rarely felt in my previous encounters with other works of art. Their absolute freedom and vitality upset traditional aesthetic categories and the rules of the art market.

I did some research, and realized that even though there were numerous monographic works about specific artists, there was no documentary film to date dealing with the history of Art brut as a whole. The goal of this film is to entice the spectators to delve into the irrational, enigmatic, and fascinating beauty of Art brut.

Why Is Crowdfunding Necessary?

Film producer Sébastien Tézé, who runs the “Les Films d’un jour” production company, was enthusiastic about the project. But after several weeks of writing and months of waiting, we got some bad news: not a single French television channel was interested in the documentary. They thought Art brut as a topic was still too confidential, and that spectators would not be interested in it. In spite of it all, Sébastien decided to back me up and fund part of the project. I have been working on this documentary for over a year now, and it has turned into a real obsession. But how could it be otherwise? It’s Art brut we’re talking about.

Given the fact that no TV channel was willing to fund this project, I have decided to turn to crowdfunding to attempt to raise the sum of 20 000 euros, which would be necessary to complete the documentary. It would then be released on DVD and VOD (Video On Demand) next Spring.

This documentary film deals with the history of Art brut, from the early twentieth century to now, by focusing on four of its essential, pivotal figures.

Jean Dubuffet, who coined the term Art brut and was also its first theorist, will be our patron saint throughout the movie. Hans Prinzhorn, who was the first to consider works by the mentally ill as works of art in their own right, Harald Szeemann, who introduced it into contemporary art circles, and Alain Bourbonnais, who open up the concept and linked it to the notion of self-taught art at large, will also guide us in our journey towards Art brut. This choral narrative will allow us to highlight some of the questions they raised, which are still haunting the world of Art brut today, and indeed the art world at large.

Denis Lavant, for all intents and purposes an actor who remained resolutely “beyond the norms”, will lend his voice to the voiceover commentary.

We will of course discover numerous works of Art brut throughout the film, and will take a closer look at works by iconic artists such as Adolf Wölfli, Aloïse Corbaz, Henry Darger, Augustin Lesage, Madge Gill, Laure Pigeon, Carlo Zinelli, August Walla… But we will also encounter contemporary Brut artists such as Michel Nedjar, Joseph Lambert, Louis Poulain, Daniel Douffet, or Laura Delvaux, and see them at work.

Dreamlike allegorical sequences will offer transitions between a rigorous historical narrative and the fanciful, free-floating universe of Art brut. They will allude to the creative impulses, but also to the loneliness, the innocence, and the seclusion of artists who often tend to remain in the shadows.

The film will be punctuated by contemplative wanderings through some of the most iconic places in the history Art brut. The lightness and fluidity of these traveling shots (on Steadicam) will allegorize the restless, ever-wandering spirit of Art brut.

Our narration will also be punctuated by interviews of leading international specialists and key figures of Art brut. They will allow us to open up the debate and lead a global reflection on the way Art brut impacted our perception of madness and normativity, on the status of artists, and the legitimacy of a work’s claim at being “art”.

Where the Shooting of the Documentary Took Place.

The documentary was shot in Switzerland, France, Germany, England, and Belgium, in order to allow the spectators to discover places and institutions that played a key role in the history of Art brut:

Dr Guislain Museum for the History of Psychiatry (Gand - Belgique)

We will also discover two art therapy workshops and its fascinating artists:

Photographic archives from the Dubuffet Foundation, the Art Brut Collection in Lausanne, and the Prinzhorn Collection will be displayed throughout the movie, in which they will play a key role. It will also include rarely seen film footage of Hans Prinzhorn, Alain Bourbonnais, and André Breton, for instance an interview given by Breton only a couple of months before his death. Visual archival materials—of the First World World, or of the mass murdered of mentally ill patient by the Nazis, for instance—will provide broader historical context.

“Eternity has no door of escape” was the title of an exhibition of the personal collection of leading Art brut collectors Jean-David Mermod and Philippe Eternod at the Gottardo Art Gallery in Lugano in 2001. This enigmatic, poetic sentence was originally written by the British mediumnic artist Madge Gill at the back of one of her works.

I am planning on using around fifteen works by various musicians throughout the movie: works by Chassol and Trentemoller alongside classical music by Schubert, Moondog’s idiosyncratic jazz compositions alongside Steve Reich’s minimalist works. This stylistic variety aims at mirroring the diversity of the art works themselves, and of the rich personal mythologies described in the movie.

However, given the fact that no French television channel has expressed interested in acquiring the broadcasting rights of this documentary to date, I cannot go ahead with the project and complete the documentary without your support: that’s why crowdfunding is absolutely essential to the project.

10 000 €: Completion of the shooting in London, Canterbury, Paris, and Brussels. Most of this sum will be used to acquire the broadcasting rights of filmic and photographic archival materials.

15 000 €: Recording of the voiceover commentary, read by several actors including Denis Lavant. Professional sound mixing for the entire documentary in a sound studio.

22 000 €: Professional work by a graphic animation artist to animate several photographs and titles (“after effect”).

25 000 €: Official premiere of the documentary with a 4 K film projection in a movie theater, followed by a debate with some of the movie’s interviewees and a cocktail.

35 000 €: Limited edition of the documentary’s DVD box set comprising the film’s DVD, a CD of the soundtrack, and a book publication of the twenty interviews realized for the movie, ordered thematically, with numerous color illustrations.

A big THANK YOU !

A big THANK YOU + a link to watch the movie online

A link to watch the movie online + Numbered limited edition postcard of the film’s poster.

A DVD of the documentary + Numbered limited edition postcard of the film’s poster + The film’s poster (60 by 70 cm, featuring a reproduction of a work by Adolf Wölfli) + Collection de l’Art Brut catalogue

A DVD of the documentary + Numbered limited edition postcard of the film’s poster + The film’s poster (60 by 70 cm, featuring a reproduction of a work by Adolf Wölfli) + Collection de l’Art Brut catalogue + Personal guided tour of the Collection de l’Art Brut in Lausanne + Visit at Galerie du Marché & cheese fondue with the leading Swiss Art brut collectors Eternod and Mermod in Lausanne.

A DVD of the documentary + Numbered limited edition postcard of the film’s poster + The film’s poster (60 by 70 cm, featuring a reproduction of a work by Adolf Wölfli) + Collection de l’Art Brut catalogue + Personal guided tour of the Collection de l’Art Brut in Lausanne & Cheese fondue with the leading Swiss Art brut collectors Eternod and Mermod in Lausanne + Invitation to the film’s premiere (with the documentary’s team and several interventions by Art brut specialists) in Paris and Lausanne + Buffet and aperitif with the director and at least two of the movie’s interviewees.

A DVD of the documentary + Numbered limited edition postcard of the film’s poster + The film’s poster (60 by 70 cm, featuring a reproduction of a work by Adolf Wölfli) + Collection de l’Art Brut catalogue + Personal guided tour of the Collection de l’Art Brut in Lausanne + Visit at Galerie du Marché & Cheese fondue with the leading Swiss Art brut collectors Eternod and Mermod in Lausanne + Invitation to the film’s premiere (with the documentary’s team and several interventions by Art brut specialists) in Paris and Lausanne + Buffet and aperitif with the director and at least two of the movie’s interviewees + Cocktail and dinner with the documentary’s interviewees + a separate DVD of 5 of the interviews in full (to be picked among the several interviewees) + Your name mentioned in the credits of the documentary.