Every child should dance: help transform children's lives through art

Arts for healing and progress

Every child should dance: help transform children's lives through art

We are a group of Sicilian artists seeking funding for the new charitable dance production Il Cantico delle Creature, l’esaltazione del cielo. This work will be directed by Fabio Dolce with support from the charitable organisation ‘La Casa Del Sorriso’, Monreale (Palermo) in Italy: an association that brings particular attention to minors that live with various types of social issues. They offer shelter to children from 0 to 14 years old that have been taken away from their families that are no longer able to care for them.

This chartible association owns a big space used as a conference room.

Fabio and his artistic team want to use that room as a performance space.

This event will be the beginning of a long term collaboration between the artists, the venue (‘La Casa Del Sorriso’), and the children it supports. They want this event to act as a spring board for future performances and workshops involving international artists to give the opportunity for these children to make a connection with arts and culture, allowing them to express themselves and grow in an artistic environment for better future opportunities.

You can participate with a financial support that will be used to afford the production costs of this charitable event.

Even the smallest contribution, will help to enhance the quality of these vulnerable sicilian children's future.

The project is supported by the city of Palermo, the comune of Monreale, the region of Sicily and other local institutions.

For this performance each child will be given a free ticket to the event and all proceeds from this will be donated to this charitable body, to invest in the children's artistic and cultural education.

The performance will involve a choreography made by Fabio Dolce in collaboration with Antonino Ceresia, an actor, an exhibition of Pippo Madè’s paintings, the Sancte Joseph choir directed by Mauro Visconti and two musicians. Much of the event will be orchestrated as a promenade performance through paintings and sculptures and will culminate in an evening of dance, song and theatre. The curatorial theme of this event is inspired by The Canticle of the Creature by S. Francesco d'Assisi.

The opening night of the event will be held on the 14th of October in Monreale (Palermo) at La Casa del Sorriso.

He is a multi-cultural, interdisciplinary artist who has led a creative career in dance, working across various artistic mediums throughout Italy, France and England. He is working to explore and develop his craft and wants to share his knowledge and work with his audience as an independent artist, a collaborator and an author. Fabio is interested in working in different artistic mediums as both a performer and choreographer. He has previously collaborated with painters, sculptors, digital artists, scientists, singers, musicians, photographers, video-makers, choreographers and dancers. After dancing for the Cannes Jeune Ballet and the CCN Ballet de Lorraine during his twelve years based in France, he is continuing his journey as an international artist. Fabio is currently based across London, Paris and Palermo. As well as dancing in his own works, he has recently worked with Shobana Jeyasingh, EDIFICE Dance Theatre, Diane Wiltshire, Chatha and Essevesse. Throughout his career he had the chance to dance in international theaters such as the Sadler’s wells and the Paris Opera House, and he has been chosen as soloist for pieces made by George Balanchine, William Forsythe, Nureyev, Nijinska, Michel Fokine, Mr Cunningham, Twyla Tharp, and many others.

Based in Marseille, he is currently responsible of a project raising awareness of dance at L'Opéra de Marseille.

The choreographer is now widening his creative universe to different artistic mediums, which gives him the opportunity to create very differentieted projects. He danced for several companies: the Teatro Massimo of Palermo, the Aterballetto, the Opéra de Bordeaux , the Maggio Musicale Fiorentino, the Opéra de Nice and the Ballet d'Europe.

He is the artistic director of the dance company Essevesse founded by himself in 2013, which has been finalist in several choreographer awards, such as: prize Equilibrio-Rome programmed by Sidi Larbi Sherkaoui ; Les Synodales-Sens ; the 31st edition of the awards in Hanover ; T.OFF Sardegna. The company also participated in various choreographic europeen's festivals.

Pippo Madè has been an artist for over 60 years. As Pippo is self-taught, his journey has at times been difficult but with enthusiasm and intellect, he has left his mark in his portrayal of social, historical and political subjects. Madè’s talent has attracted the attention of a succession of Popes, from John Paul XXIII, Paul VI, and John Paul II who met the artist in several events in Assisi and in Sicily. More recently, he has also caught the attention of the current Pope Francis. Throughout his career, Pippo Madè has been involved in the portrayal of the existential issues facing society, from the Mafia and organised crime, to immigration, and violence and drugs. He has also explored historical events, from the old Sicilian professions, to the banditry in Sicily of the 19th century, the “Vespri Siciliani”, “Federico II Stupor Mundi”, and “Pinocchio” (the Sicilian Peregrin Ulysses). As a dedicated Catholic himself, Madè has worked for religious causes. Notable credits amongst his religious works include the Canticle of Creatures, the Gospel, San Pio of Pietrelcina, and the Via Crucis (painted on volcanic stones for the “Chiostro dei Morti della Basilica Papale di San Francesco d’Assisi” and the “Santo Rosario” held in the Romanic Salon of the same Basilica). Undoubtedly, the pinnacle of his religious work is the “Presepe Incantato”, a nativity made in precious Murano glass with the glassmakers’ collaboration in the 70s, which is today exhibited at Santa Croce. Madè’s works have been displayed across the cities and capitals of Europe, from Warsaw to Krakow, Frankfurt to Berlin, Paris to Vienna. Overseas, following a considerable exhibition named “La finestra sul golfo - Omaggio a Guttuso”, the City of Chicago asked the Palermo-born artist to create the billboard of the “Columbus ‘500 Years”, for which he was awarded the Eurasian prize for Billboard of the Year. A large glazed ceramic mural crafted by Madè, named “L’Angelo della Giustizia” is held in the Paolo Borsellino’s chapel. Madè has since immersed himself in the eternal Poem, la “Divina Commedia”, creating at first, an illustrated version followed by a painted version. The artworks, owned today by the “Centro Studi Danteschi di Ravenna”, and forming part of the “Pinacoteca Dantesca Madè” are normally held at the Severino room. Today, they are temporarily  exhibited at the chapel “Cerchi di Santa Croce“ and  at the Minoritenkirche of Vienna. Pippo has been awarded prestigious prizes and awards all across the globe. In 2015, the “Università degli Studi di Palermo” accorded him the “Laurea ad Honorem” in Science of the Continuous Education. In 2016, the President Sergio Mattarella, conferred upon him the prestigious title of “Ufficiale dell'Ordine al Merito della Repubblica Italiana”.

Mauro Visconti ​began his journey in music at the conservatoire ​V​incenzo Bellini​. It was at this Palermo institution that he was awarded his diploma, reflecting an education in piano, music and choir direction, organ and organ composition, composition and orchestra​l​ direction. ​Mauro's career has brought him experience as an orchestra director, musician and accompanist. ​He has​ worked as ​an Assistant ​P​rofessor​,​ ​and in a leading position for the Foundation of the Orchestra Sinfonica Siciliana​. ​Mauro is a​lso​ ​a ​member of the sacred music section of the liturgical service of the ​A​rchdiocese of Palermo​, and ​Choirmaster of the ​Cathedral of Palermo. ​In addition to this extensive activity, Mauro also teach​es​ theory, musical and rhythmical perception at the Conservatoire Vincenzo Bellini;  he is a member of the academic council ​and head​ of  artistic discipline​ ​for ​c​hoir ​​direction and ​c​hoir ​​composition.

The Sa​int​ Joseph ​C​hoir was formed in 1994 by Mgr Gino Lo Galbo, the ​m​aestro Mauro Visconti and a group of passionate people that express themselves through sacred songs and music in order to ​celebrate the Catholic faith. Since the outset, the​ ​Choir has performed successfully in hundreds of events​. Their success has even attracted the attention of the Pope​​, with the Choir having been invited to the Vatican on a number of occasions. ​Popes ​John Paul II, Benedict XVI, and​ ​​the current Pope​ ​Francis have​ all preside​d over​ events with the musical accompaniment of the Sa​in​t​ ​Joseph​ ​C​hoir. Their r​ich​ repertoire varies from the classic polyphonies from the ​R​enaissance to the modern compositions inspired by ​faith​. The choir is directed by Mauro Visconti.

The funds we need to raise are vital to accomplish this charitable and artistic project. Currently the financial requirements have not been achieved to complete this project, so applications to various societies for private funding are being considered, but more than anything we are hoping that the kisskissbankers platform will also assist, knowing that this network is geared to helping each other achieve spectacular projects such as this one.

The proceeds of these funds will be tranferred to the bank account of the French company Essevesse directed by the collaborator Antonino Ceresia.

Creation of the flyer, impression and diffusion =500euro

Footage, video making and trailer of the performance =1000euro

Renting the devices needed for sound and light =1500euro

If the proceeds of these donations exceed, the difference will be employed to diffuse this performance again in other places within Sicily, that take care of young people in need; along with the purpose of expanding culture and arts in the community of Sicily.

WHY IS THIS IMPORTANT ?

The completion of this project is very important to these Sicilian artists to allow them to build a stronger network within this area and create more artistic events to further develop young children’s creativity and guide them towards a better future.

“We are confident you will contribute to this project, as you are people attuned to the need of such projects, for social and artistic purposes, so we would like to remind you of the famous words carved on the frieze of our beloved Teatro Massimo of Palermo, that also became our motto:

• ”The art renew the people and reveals their life, idle is the one which doesn’t aim to prepare for the future” 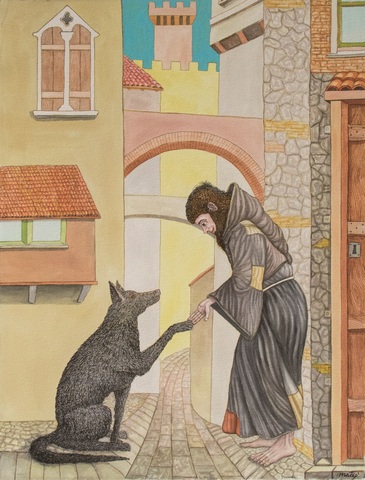 People who contribute this amount will receive photos of the artists and the brochure of the event designed by the renowned painter, Maestro Pippo Madè. The shipping cost of the reward will be on us.