FOAMDAY is the game where you create your own wave of foam to surf across the Pacific! 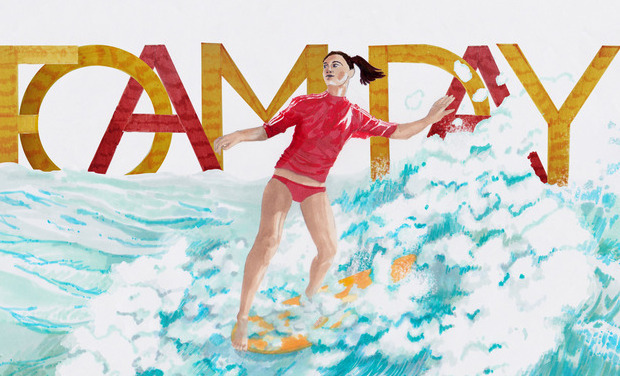 Learn about the story of Alice Alive

The Pacific Ocean, a long beach on the coast. We find our famous heroine Alice Rivières in Australia; she is a passionate surfer obliged to give up her sport. There's nothing that can be done, the uncontrolled movements caused by Huntingdon's disease* make her lose her balance. It's hopeless. One last shower on the beach and she'll leave the ocean behind her for good.

But, as she vigorously soaps her skin with her favorite shower gel, Tahiti Douche, her movements of rage and frustration begin to produce an astronomical amount of foam! Foam that surrounds her, supports her, stabilizes her and even comforts her. See her transported onto the sand, carried in triumph to the ocean and once again on her surfboard. To her great amazement, her uncontrolled movements are now drawing beautiful waves of foam that she'll have to learn how to master. Now she's off on an adventure around the world, searching for an idealized Tahitian Vahin, who alone holds the key to the secret of this fabulous foam.

It's at this point that the game begins

You're off to meet your future allies: Gods, plants, animals, scientists and beer drinkers, whom you'll have to take with you on your surfboard. On the way, one after the other, genies of foam and princes of bubbles will appear, serious or completely crazy, helpful or hostile: inspired aborigines, pessimistic doctors, stunned fishermen, disgruntled surfers, a mysterious Indian, Vishnu, God of Foam, Miyazaku, Miyazaki's cousin... You'll have to account for your acts to Greenpeace, speculate with Stephen Hawking and cook up a lot more foam to reach your goal: make it to Tahiti, paradise of eternal foam! As the adventure unfolds, your pantheon will grow. You'll be introduced to the art of trembling and the subtleties of foam, all of this taking place in sumptuous decors, from lunar deserts to oceans.

How do you play?

Play the part of Alice Rivières and make foam using movements inspired by Huntingdon's chorea. Thanks to the chemical interactions of different foams, the elements and characters encountered at each level, create the wave of foam that allows her to continue to surf with the elan of a sorcerer's apprentice. Buster Keaton will never be far and a few catastrophes in chain reaction await you on this joyous adventure!

Turn Alice's life into a gigantic surf ride and allow her to continue to live her passion.

FOAMDAY will be distributed on PC and Mac, as well as tactile format, and will be accessible on Steam, Humblebundle, Desura, GamersGate and IndieRoyale.

FOAMDAY has been conceived of as a paying game, whose accessible price can be complemented by donations to the “Co-production Institute of Knowledge about Huntingdon's Disease” and to medical research.

FOAMDAY is a video game where you can experiment a new relationship to the world. The first video game that takes as subject Huntingdon's Disease, it proposes an unprecedented way of living the experience of a carrier of this fatal, incurable illness following a path of initiation into a universe that is dreamlike, quirky and full of humor.

Huntingdon's disease is characterized by a neurological degeneration that provokes serious motor and cognitive dysfunctions. The gameplay is based on the most important motor dysfunction, uncontrolled large movements and gestures. These serve to create the greatest waves in order to continue moving forward. The game will thus generate a creative approach to the disease that is so important to us, in the direct line of the philosophy of the Dingdingdong Institute (http://dingdingdong.org).

FOAMDAY is a game for all audiences; it will also be promoted in milieus concerned by the disease.

The FOAMDAY concept and what inspired it

Using as a starting point a medical problem which has no solution, we consider experimentation inspired by philosophy and the narrative and visual arts. We want Huntingdon's disease and its symptoms to be seen no longer only as a malediction for families but as a possibility for a new way of being with oneself and with the world. In our game, the surfer uses her movement to increase the amount of foam and pursue her passion in a different way. The force of this “reversal of situation” thereby participates in a completely different vision of the disease. With FOAMDAY, she becomes the portal towards a new world, both unstable and fabulous, the recipe for which we must discover.

Aesthetical and narrative notes of intention

Graphics are still in development.

They will reflect a very particular attention given to the decors which we wish to approach as veritable paintings and to the startling properties of foam, which allow for multiple interactions. The game will play on the exuberance and pleasure of producing waves in strange and wonderful forms. The interactions between several materials could lead to a veritable chain of graphic catastrophes, making FOAMDAY a serious game, but also a moment of pure visual pleasure.

The numerous characters met on the way will nourish a rich narrative full of surprises based on the apprenticeship of techniques for using foam and hidden resources of Huntingdon's chorea.

You can follow the aesthetic evolution of the project on this KissKissBankBank page, as well as on the FOAMDAY Tumblr, which is updated on a regular basis (http://foamday.tumblr.com).

These three artists intervene essentially on the concept, narration, sound and graphics. In collaboration with developers they search for new ways to play, and original gameplays.

DINGDINGDONG wishes to demystify the disease but also to find in it a potential and a creative energy relayed into multiple artistic and intellectual projects, amongst which our video game. The members of Dingdingdong are philosophers (ISABELLE STENGERS and VINCIANNE DESPRETS, amongst others), choreographers (ANNE COLLOD), historians, visual artists, writers and video artists (FABRIZIO TERRANOVA), etc.

DINGDINGDONG constitutes an inspirational force in the domain of ideas, care for people touched by Huntingdon's disease and nourishes its work by the ongoing collection of singular experiences of people affected by the disease.

ALICE RIVIÈRES: fictional character born in the mid 1970's. She appears for the first time in 2009 in a novel that relates how she learns that she is a carrier of the gene for Huntingdon's disease. She dedicates most of her time to exploring what she calls “the long march of her neuroevolutionary metamorphosis”. On a regular basis, she posts reports on her Huntingdonian expeditions on the website http://dingdingdong.org.

OLIVIER MARBOEUF: author, performer, critic and independent curator. After an itinerary in comics (he is the founder of AMOK editions, which became FREMOK), he has directed the Espace Khiasma since 2004 (http://www.khiasma.net), an art center dedicated to the production and screening of artists' films. He is also an associate producer at SPECTRE Productions and artistic adviser for PHANTOM http://www.phantom-productions.org/

The continuation of the FOAMDAY experience will also be accessible via a communal Internet platform edited by RÉSIDENCE MIXTE http://residence-mixte.com/.

FOAMDAY has been selected as a finalist for a prize from the Protopitch competition. FOAMDAY is also coached by the Halles de Schaerbeek team in crowdfunding and will be present at the three day Europe Refresh Salon in Brussels and Paris. We thank the team again for its dynamism and precious help. Finally, we want to thank you all, readers and donors, for your attention and interest. See you soon!

By participating in our financing, you make this original mode of existence in the world possible by PLAYING and, with us, help transform symptoms of an incurable disease into a resourceful weapon!

Thanks to your participation, we will be able to refine our first prototype and arrive at a definitive design. We will also be able to determine the game scenario. Finally, with the aid of developers, we will find THE ideal gameplay and offer you access, with the help of our game designers, to a playable prototype of a first level that will allow you to participate in our research. This being our first short term objective, here are the different levels of production which we hope to reach with the help of public, private and participative support, thanks to KissKissBankBank.