Help the post-production of this long lenght film already shot and edited. Help us to finish the film, making possible the distribution ! 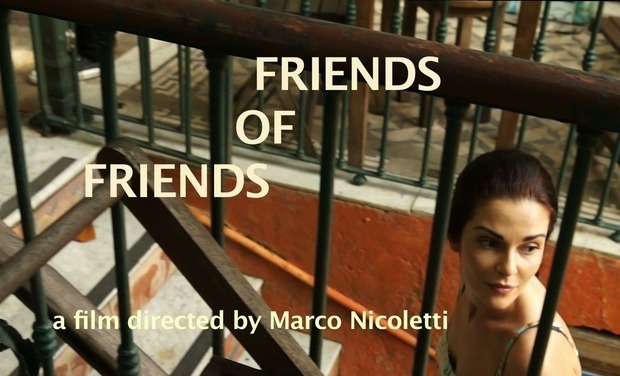 Subject of FRIENDS OF FRIENDS

In Rio de Janeiro, Melissa wants to introduce her boyfriend Junior to her friend and collegue Palma, since she discovered that both have a tinnitus (a stress desease which consist in a whistle in a ear), that started after the dead of their parents. She thinks that they can help one another to cure it, and organizes some meetings that never got through, because both of them are always late.

One day Junior is visited by a mysterious girl in his apartment: she doesn't speak, she does a tour of seight seing in her living room, then she leaves. Something tells Junior that this one is the girl, she is the famous Palma. Immediately, he goes to tell Melissa the weird meeting that he just experienced : Melissa confirm that the described girl might be Palma... but Palma just died the day before!

Friends of Friends is a poetic film, which mixes realism and mystery. The characters are light and anxious, the set is beautiful, the environment is exotic. This film is the third episode of four films shot on the American continent (North and South). Next one is going to be settled in Montréal.

This are films made with a very little budget, as I'm doing everything by myself : filming with my own camera, with only one light, two microphones, in the authentic sets, while I encourage the actors to improvise...

My duty is to be the storyteller who brings back to France stories from the other side of the ocean. Telling those stories not through a documentary or a reportage, but under the shape of fiction movies, which are also very close to reality. The people that I show are mostly belonging from the middle class, they are often artists and bohemians who struggle to survive.

Friends of Friends has the peculiarity, compared to the other three films, to be (very freely) inspired by a Henry James novel. It's all about love and ghosts : a gothic story in a tropical context....

The improvisation, the natural locations, the freedom of the camera (because of the lack of crew), gives to this surnatural story a touch of true, urgent and immediate, not forgetting the mistery. In another time this story would be told with a pen and a paper. Today, affordable tools permit to a single man to replace the pen with a camera. The story-teller (myself), can make a film alone, with the help of few actors...  It's an innovation that everybody can afford : everybody who has a little talent, and has the intention, the energy and the will to tell a story with images and sounds...

Synopsis of FRIENDS OF FRIENDS

Junior is a plastic artist who lives in Santa Tereza, an ancient awesome but partly abandonned district of Rio de Janeiro (just near the favelas), where now days are living  many young bohemians. Melissa is a dancer, who prepares a show helped by her old girlfriend Palma, a girl that she can't stop to admire for her beauty and grace.

Melissa falls in love of Junior, and discovers his pathology being very similar to his girlfriend Palma's one : a "whistling in the ear" that appears in times of stress". For Junior, as for Palma, this whistling appeared for the first time at the death of the father (for Junior) and the mother (for Palma). Junior and Palma had made the same speech to Melissa on this subject: "the whistling it is my father who tried to tell me something before dying" (Junior), "my mother wanted to say hello for the last time" (Palma). Because of this disturbing evidence and this strange similarity, Melissa will try, throughout the whole film, to make up a meeting with her two friends. But, for some unexpected bad fate, this meetings never happen : every meeting, one of the two friends is unable to ensure his presence... But these failed meetings increases the curiosity one to other, Palma and Junior, and raise the jealousy of Melissa. The woman who at the beginning was the instigator of an event who never held, becomes the one who sabotate the meeting of her two friends, fearing that they will end up falling in love.

One day Junior is visited unexpectedly by a girl : we only see the gracefull feet of this one  walking inside the apartment, not her face. We see the trouble in the face of Junior, who can't even open his mouth. Then the girl sits in front of him, in his living room: two pair of feet face one another. A few intense minutes passed, a tension loaded: then the girl walks out, and our man can't even move a finger to retain her...

Actually Palma died in a car accident the previous day. But the description of her that Junior gives, is perfectly indeed... First, Melissa dares the risky assumption of the existence of a ghost : she hesitates between believing her boyfriend story, or assuming that their two imaginations are turning both of them crazy... In the phase that follows, the woman is captured, once again, by the daemon of jealousy. What about if Palma and Junior, already capable of a paranormal and mysterious connections with their two dead parents, continued to meet secretely in a parallel world?

Is Melissa right thus to worry? Or did she created herself inconsciously this ghost, as an obstacle for a man whom she feels inaccessible, a love that she believes she can't afford?

This film has been shot (in Brazil, in Portuguese) and already edited.

But it needs a good postproduction : color correction and mixage. Without this it can't be showned and distributed. The cost of the post-production, is 6000 euros.

I hope that you'll help me to show this film.