When the energies and creativity of Cambodian Space Project, Michael Laub and Phare Ponleu Selpak meet: a clashing performance! 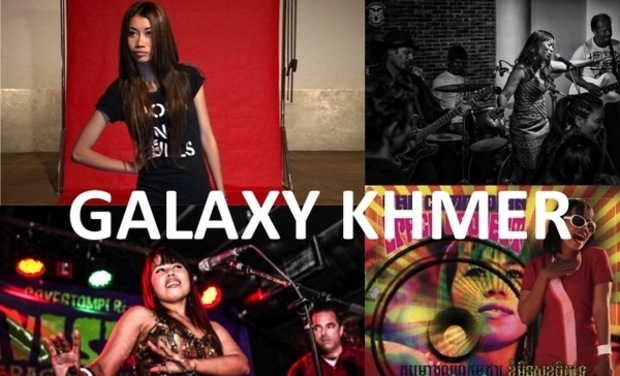 Vanthan from Battambang to Galaxy Khmer...

One of our most brilliant music students!

It is at first the story of a place: Phare Ponleu Selpak in Battambang... then in Siem Reap

An educational and cultural center open to disadvantaged young people who represent the alchemy of the creativity of PPS.

Elements of the arts mix: circus, theater, visual arts and music. Open to all, this arts center receives artists from all over the world who visit; to train, exchange, share, create and produce amazing realizations. More than 500 Cambodian artists benefit from training at the center and every year more than 30 foreign artists join them for cultural cooperative education and high-level artistic contributions. Recently, thanks to the installation of a new big top, it is in the ancient capitol city Siem Reap where professional live performances take place.

The debut of Galaxy Khmer is planned for next December.

This project is a unique collaboration between the director Michael Laub, the rock band Cambodian Space Project, the film director Marc Eberle, and the musicians and dancers of Phare Ponleu Selpak in Battambang.

GALAXY  KHMER  is a dynamic, charismatic and insightful journey, partially through the music and sounds of Khmer rock & roll history and an indication of its future direction. At the center, a diva illuminates the story through song and dance, channeling the divas of old, awakening their spirit and playfully conjuring a place amongst the former lost generation of musicians.

Renowned theatre director and choreographer Michael Laub acts as artistic director on the project, shaping and manipulating the material into a succinct form, full of curiosities and variants of emotion.

The Cambodian Space Project is supported onstage by musicians from PPS, adding texture and anchorage, playing traditional Khmer instruments, mixed here with the garage rock sound of The Cambodian Space Project. The technical abilities and flair of the musicians from PPS broaden the shows’ musical horizons to an evocative, timeless place. Their engaging presence also adds another level of experience to the energetic and spirited show.

Marc Eberle projections are a mix of carefully represented historical archival film material, as well as manipulations of idiosyncratic video material shot onsite at PPS in Battambang of performing circus artists. Animations were also made with the assistance of the school. Eberle in collaboration with Laub have selected a series of projections, specific to the music and narrative flow of the performance.

Along side this, dancers intermittently perform on selected songs, embellishing both historical and contemporary forms of dance in Cambodia. Adapted Madison dance, as typified in high and low forms of recent culture, is presented alongside more classical forms of dance, with one of the dancers having been trained in the Royal Ballet.

This is the first step towards a potential larger scale musical / opera in which new elements will be added; actors, spoken word and an elaborated story line.

Director / Choreographer Michael Laub has been referred to as a pioneer of postdramatic theatre. In 1981, he founded Remote Control Productions, emerging from performance group Maniac Productions, presenting amongstothers ‘Rough’ 1994, ‘Planet Lulu’ 1997, ‘Pigg In Hell’ 2000, ‘Total Masala Slammer’ 2001 and ‘The H.C. Andersen Project’ 2003. His pieces oscillate between realism and fiction, making use of authenticity and theartificial simultaneously. His performances include various forms and are often influenced by film and  television. Since 2002, he has been working on the ‘Portrait Series’, an attempt at adapting portraiture to the stage. Previous showings of this series include ‘Portraits 360 Sek’ at the Deutsches Schauspielhaus Hamburg 2002, ‘Portrait Series: Alone’ with Astrid Endruweit 2004, The Biography Remix’ with Marina Abramović.  2004, ‘Portrait Series Berlin: Professional and Non-Professional Dancers’ 2007, ‘Portrait Series Istanbul: Aspiring Actresses and Actresses’ 2010 and ‘Burgportraits’ Burgtheater Vienna 2011. He is currently working on ‘Portrait Series Battambang: Scavengers, Models and a Security Guard’, opening at HAU Berlin in early 2014.

This hybrid Cambodian rock band was constituted after a fortuitous meeting. In 2007, Julien Poulson, an Australian musician wanted to re-visit the classics of the golden age of the Cambodian music of the 1960's. He then meets Srey Chanthy, a young singer of karaoke fascinated by the rock which her mother listened to at the time. From then on, the musical adventure takes shape and they unite a heterogeneous troop of Cambodian and western musicians, refreshing the live scene of Phnom Penh and reviving again the pressing of music on vinyl, the first in Cambodia since 1975, allowing for the discovery of this incomparable sound around the world. The Cambodian Space project has already recorded more than 4 albums and has performed more than 200 times on the Cambodian and international scene.

Marc Eberle was born in 1972 in Heidelberg, Germany, studied Language, Literature and Culture of NorthAmerica, History and Media Culture at the University of Hamburg. He holds a MA in Film and TV from RoyalHolloway, University of London. He worked as researcher at Archive Films in New York and helped to set up Cambodia’s largest private TV station, Cambodian Television Network, CTN, as producer, director, production manager and coach of the local staff. Currently he is teaching documentary filmmaking at the Goethe Institute in Phnom Penh as well as pursuing his love of making films. Since January 2011 Marc has produced short films as correspondent for Dutch broadcaster VPRO’s slot METROPOLIS in Cambodia, Thailand and Burma. Starting January 2012 Marc has been appointed Artistic Director for DocNet South East Asia, a two-year regional training initiative funded by the EU and Goethe Institut with numerous panels, round tables, workshops and a masterclass in Indonesia, The Philippines, Cambodia,Vietnam, Thailand and Burma. As part of the project Marc plans, curates and oversees the implementation of ChopShots, the new international Documentary Filmfestival held in Jakarta from December 5-9 2012.

Marc Eberle has previously directed documentaries for BBC, HBO, ARTE, NDR, WDR, SWR, BR, MDR, ZDF and Discovery Channel in Oman, Pakistan, India, Nepal, Laos, Vietnam, Cambodia and Burma. His latest documentary, The most secret place on earth – The CIA’s covert war in Laos (NDR/ARTE, WDR, Filmfund Hamburg, Filmfund NRW, MEDIA new Talents, MEDIA, developed in the framework of the Discovery Masterschool) opened in German cinemas early 2009 and has been screened at over fifteen international film festivals and was nominated for the north German Film Award, the History Makers’ Award in New York, the Golden Panda at Sichuan intl. Filmfestival, China, the World Television Award, Banff, Canada. So far the film has been sold to 25 countries.

Eberle is currently completing a feature length documentary on the Cambodian Space Project.

Since 1994, Phare Ponleu Selpak, a non-profit organization, has developed a rights-based holistic approach to children and teenagers needs through 3 fields: social action, educational programs and arts and culture. PPS is located in Battambang.

Everyday, PPS welcomes around 1500 young people (more than 500 have an artistic training)

PPS’ action is innovative in Cambodia as it is centered on artistic practices. Arts are used not only as a tool to foster expression, but also as a complete set of tools aimed at answering children’s psychosocial needs. Following the years of war and the destructive Khmer Rouge regime, Cambodian culture was seriously damaged.

With experience, the artistic quality trainings provided for an artistic maturity and the young artists of PPS perform on Cambodian and international stages. Since 2002, PPS has produced its own shows. Since May 2013, a big top allows the production of shows (performances, circus) for the joy of the population and visitors of Siem Reap.

And the icing on the cake?

After several days performances in Siem Reap end of December, the show Galaxy Khmer will be hosted in Berlin in HAU en early January 2014.

The Hebbel am Ufer (HAU) is a theater and international performance center based in Berlin, Germany. It was founded after the fusion of three theaters in Kreuzberg, Berlin: Hebbel Theater, now called HAU1 Theater am Halleschen Ufer (theater at Hallesches Ufer), now called HAU2 Theater am Ufer, now called HAU3. Its mission is to protect and support the tradition of the Hebbel Theater, which is to provide space and infrastructure for different international and national theater, dance and performance events.

The HAU is known for international productions in diverse performance arts. Especially for younger generations of theater enthusiasts, HAU has become an important part of the cultural life in Germany. Political and avant-garde, young and experimental, the HAU unites all these attributes within its three project spaces. International guest performances make the HUA into an important venue of cultural dissemination. Both in content and in form, the HAU offers a range of events: sound installations, interactive performances, and contemporary dance.

The outcome of this project depends on it and we only have 80 days to finalize it.

Revive culture in Cambodia with a multidisciplinary current creation.

The funds will cover the essential expenses of rehearsal in Siem Reap from 15 till 22 December 2013. It will allow us put on trial performances to ensure ourselves of the show’s quality so that we can ultimately realize a tour in Europe.  Finally it will allow to offer to the Cambodian audience of Siem Reap two opportunities for a unique, entertaining presentation of a part of their musical history.

To revive the culture, is also to share it.

To gather so many actors is expensive, involving transport, accommodation, food, technical equipment,  and salaries for the Cambodian artists to support themselves and their families...

Phare Ponleu Selpak must cover all these expenses. To do it well, we need 6 more days rehearsal. During these 6 days we have 2 performances during the evening in our big top in Siem Reap. During these 6 days a team of 24 people will work full days, artists, technicians, choreographer... In addition, we need 5 part time. All included each day cost 2200 €. The total is €13,200. We managed to cover nearly 50%.

To transform this dream into reality your support is essential.

Our eternal gratitude, your name engraved on our Website !

Your name, a CD, a T-Shirt + An invitation for 2 persons on seat A at Phare The Cambodian Circus in Siem Reap. Validity until December 2015.

Your name, the CD, the T-Shirt + a Limited edition of Art Print (100 print) signed by artist designer (Julien Poulson)

Your name, the CD, the T-Shirt + 2 Limited editions of Art Print (100 print) signed by artist + An invitation for 2 persons on seat A at Phare The Cambodian Circus in Siem Reap. Validity until December 2015 AND 2 Invitation for 2 persons for the 2 evening in HAU Theatre in Berlin (16 and 17 January 2014) / First Seats

Your name, the CD, the T-Shirt + 2 Limited editions of Art Print (100 print) signed by artist + 2 Invitation for 2 persons for the 2 evening in HAU Theatre in Berlin (16 and 17 January 2014) / First Seats AND A WEEK FOR TWO PEOPLE IN A CHARMING HOTEL IN SIEM REAP, WITH 3 DAYS ANGKOR VISIT'S AND AN EVENING SHOW & DINNER AT THE CAMBODIAN Phare CIRCUS (flight not included).