Follow us on the roads of Latin America meeting popular habitat and self-management movements, and help us to spread this project! 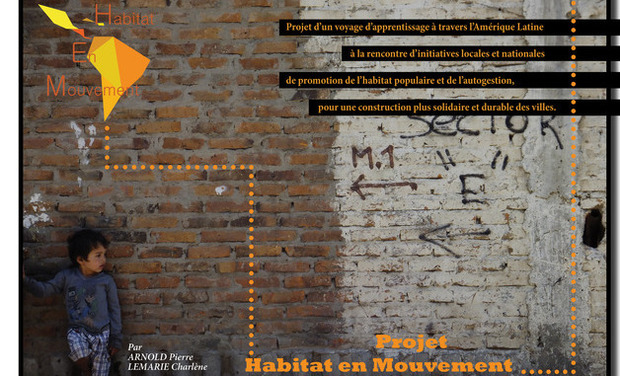 The project in a few words

Habitat in motion is an initiative and a challenge that we have set up and which consists in a journey from 6 months to a year across South America to meet initiatives and movements who the popular habitat and self-management. This educational project involves traveling slowly with a route that will be built as we go along meeting people, following recommendations and opportunities.

In each visited countries (Argentina, Chile, Bolivia, Peru, Ecuador, Colombia, Venezuela, Brazil, Uruguay) we will document the context of emergence and peculiarities of social and solidary habitat-experiences in various forms (interviews, articles, series of photographs, drawings, portraits...) to assemble them in a book that is both a travelogue across a spectacular continent and a manifesto for a more inclusive and sustainable cities construction.

At our return to France, the second phase of the project will be the self-edition of this book and the dissemination of our learnings in French cities, in order to generate debates on viable participative generation of housing and cities.

Young 25-year old french couple of urban planners; we left France two years ago to live in Latin America after studying together at the Institute of urban planning of Grenoble. We lived more than a year in Mexico and 8 months in Buenos Aires, working in different public agencies and participating in solidarity initiatives, in particular in the areas of housing and the right to the city.

Genesis of the project

We started in 2013 to publish our articles on our themes of work, travel experiences and looks over the city governance, through our website http://metropoleaks.wix.com/metropoleaks. Multiple encounters and experiences made in Mexico as well as in Buenos Aires motivated us to know more about Latin American local experiences and social movements that seek to reduce social inequalities and build new urban cultures, based on collective practices, mutual-aid and respectful of the environment.

So, we finally decided to combine our passions for urban planning, writing, photography, travel and exchange and to initiate the project Habitat in motion in July 2014!

Interviews of families from informal neighborhoods of Buenos Aires relocated to social housing... stories, teachings and limits of the housing policy!

Living in Buenos Aires we have already had the opportunity to start researches for our project through meetings, discussions and visits of self-managed housing cooperatives and the housing authorities in Argentina as in Uruguay. It's a feedback of many decades about social construction of housing and collective property which is interesting to analyze now a days, while France just recognized grouped housing for the first time in the urbanism and housing law (March 2014) and internationally debates are growing around new forms of housing (Cooperative, Communal and Collective forms of Land Tenure).

In July 2014 we will therefore leave Buenos Aires in the direction of the Andes and Chile en route to new human experiences and teachings about popular habitat (groups of inhabitants in struggle against Chile, self-managed communities in Peru, the bolivarian Great Mission of Housing in Venezuela, social urban planning and slum upgrading in Colombia, movement of workers without roofs and anti-speculative policies in Brazil among others)!

You will be able to follow us via our website as well as help us to build our route through an interactive map for suggestions of social experiences to visit, sightseeing, and any ather usefull tips!

Portrait of José Maria owner of an empty hotel in Buenos Aires, victim of a speculative and unequal urban policy, while the number of homeless and slum-inhabitants is growing fast / Visit of a recycled industrial building into apartments by a housing and self-management cooperative.

Dissemination of the project

Once we’ll be back to France after our journey, we wish to widely disseminate our experience to the general public through the publication of a self-published book and the creation of communication media (photographic exhibition, posters, presentations...) to present the results of our work in interested city councils, association, schools, cultural centers and so on.

This ambitious project represents a significant personal investment. Mainly travelling by bus or hitch-hiking and hosting at relative’s places, camping, Couch Surfing of Woofing, we will try to reduce the cost of our trip from our savings (we estimate the cost of the one-year-journey around South America to at least 4,000€ per person).

Therefore it’s not to finance our trip, but to make sure we have sufficient funds at our return to be able to carry out and promote our original project that we decided to launch this solidary fundraising. In addition to confirm the interest of our initiative, and motivate us to implement us, your support will be guarantee that we can reach our goal!

Using self-publishing, cheapest way to publish our work, we will reduce the costs requested to the printing the book and communication media. Your donations will thus enable us to cover a large part of our production costs!

We’re trying to bring together 3,500 € for this project. If we achieve this goal, we will use them as follows:

If we go beyond the objective of our KissKissBankBank fundraising,

We will use your donation to:

-print more copies of the book that you'll be the first to receive!

-reimburse costs related to rewards to the KissBankers (purchases, sending...)

-repay our investments for the preparation of the trip (camera, recorder, tent...)

We estimate to the second half of 2015 our return to France and the publication of our book Habitat in Movement... a project in the long term that we will implement thanks to your trust and for meeting our commitments to you... Remember, that you will receive information regularly and you can follow us in our journey via our website! http://metropoleaks.wix.com/metropoleaks

Thanks for the boost! You will receive a compilation prepared by our care of music discovered in each country crossed (Mp3 files)

Thanks for this contribution! You will receive personalized postcards by mail of each country crossed + the previous reward

Many thanks to you! You will receive our book in Ebook format + previous rewards

Thank you even more for your support! You will receive a digital booklet of our most beautiful photos + previous rewards

A very big thank-you! We will send you our book in paper format and signed by ourselves to thank you for your generous contribution + previous rewards

You are brilliant, thank you so much for your support! We will send you an enlargement of 3 of our photos of your choice + previous rewards

Thank you very very very much for this great help! Your name will appear in the acknowledgments of our book and we will return you a little gift of typical handcrafts in our suitcases specifically for you + previous rewards

Your generosity is matched only by your greed for a good meal! For you our gratitude we invite you to a dinner (vegetarian) concocted by our care at base of typical dishes of South America learned during our journey + previous rewards

We don't know how to thank you for your help! We shall return you a beautiful personalized gift of South America and various copies of our book at the typical meal held in your honor + previous rewards