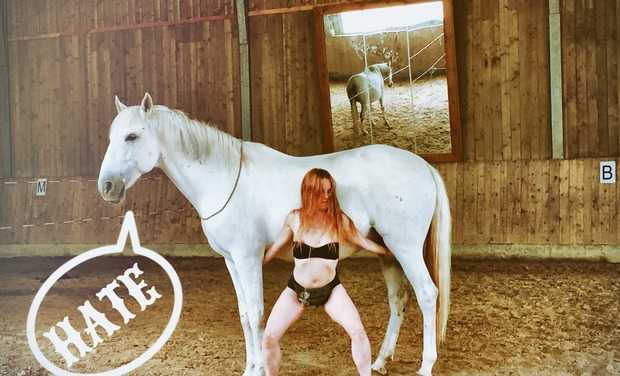 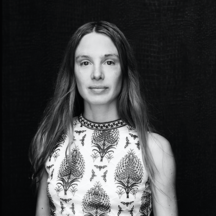 A crazy project for crazy times.

For some unclear reason, it appeared to me that the best way to talk about our era was to do it accompanied by a horse, a real horse, alone with me on stage, in a project I am working on this year.

To make him speak, to invent his thoughts, his view on our species, and songs too.

To question our relationship with animals, which we hate while loving them and which we love while hating them.

To question our relationship to others, in general, with whom we do the same.

To discover another world, spend three month rehearsing at his home, in a manege, with Judith Zagury, a horse trainer who doesn’t want to be called so. As we have not found the right word, we call her the horse trainer who isn’t one.

To work with a larger team, one more time with Yuval Rozman, with AlterMachine, and in theatres who love artists and animals.

To allow oneself to write poetry.

Some utopia maybe, who knows?

So you see, that takes some work.

First, we have to meet with one horse in particular, we need to have a relationship which makes us want to work together. That’s what happened with Corazon, who is a very gentle, very stable horse, who loves to play and is very sensitive.

Then we had to learn how to understand each other, Judith taught me code to communicate with him, and it took some time because the last time I tried horse-riding, I was 5 and my head got bitten.

At the same time we have to write the text, there are poems, songs, dialogs with the horse coming from intimate things, from travels, from this puzzling experience of being a woman today.

And the you need a team, you need to talk a lot together, because it is uncommon to put a horse on a stage alone with a human, so there are a lot of unknown questions to sort, you need to think a lot.

You need to think about the scenography, meaning the set: Philippe Quesne does this part. A set which brings us to the universe of fairy-tales.

Then you have to rehearse with the team and Corazon, see what is possible to do with the piece we wrote, what we need to change to adapt to him.

Really you need to adapt to the animal a lot, all the time, and that is also what is beautiful.

Change the dream so it becomes reality.

So here we are, we already managed to fund several weeks of rehearsals, we are missing two for me to relax, and for example to find how to make the horse speak, if we dub him, whith what voice, or if we teach him how to speak on a mic.

Train so that the horse accepts me between his legs and reciprocally, and also improve our soccer level.

Would you like to help us? We promise, it’s serious business!

As a dancer she has worked with Marco Berrettini, Maria La Ribot, Massimo Furlan in several shows.

She also played Shakespeare with Jean Yves Ruf in Measure for Measure in 2008 and with Melanie Le Ray in 2014 in The Taming of the shrew.

As a movie actress she has mainly played the main part in La Bataille de Solferino, and then worked with Christophe Honoré, portuguese director Gabriel Abrantes, belgian director Guillaume Senez, Maiwenn and Catherine Corsini. She has been playing the main role in Jeune Femme of Léonor Sérraille, distinguished with the Golden Camera at Festival de Cannes.

She has been doing her own stage work since 2010, mainly solos. The first one, Laetitia fait péter… was a piece about an entertainer having troubles entertaining (performed at Centre Pompidou last April), and then Klein (Ménagerie de Verre, 2014) was about Botho Strauss’s text Big and Small. She created Un Album with the help of Yuval Rozman and inspired by Zouc's technique in 2015. In 2016, she is invited in Festival d'Avignon and SACD to create Les Corvidés, a performance invited with Jonathan Capdevielle.

She also made a magic dog performance for the Fondation Cartier pour l’Art Contemporain, and different works at the actoral festival, Marseille.

She writes on actors for the Cahiers du Cinéma.

It is a pure Spanish breed born in the Jura who had a rather nice life in the open air, until the day when her farmer became pregnant and sold all her horses. Judith was then called to find out if she would not want to pick up some of her horses and that's how Corazon got in Shanju stud farm. He was badly castrated and nearly died at that time and then Shanju's team treated him for 6 months. It is a horse that is good in his head, very greedy and has done a lot of shows. In his life, he has also worked in therapeutic equitation, and cared for children and youth with problems.

Judith Zagury who coaches Laetitia to work with horses, Yuval Roman who writes and helps Laetitia in staging, Philippe Quesne who imagine the set design, David Perez in light creation, Jérémy Conne in sound creation, Hervé Pons who collaborates in dramaturgy, Barbara Carlotti and Vincent Thomasset who were more punctual collaborators, Lisa Como who will assist us in the coming months, David Da Cruz is the general manager of the team, Laure Chapel who administers  the Swiss company of Laetitia Dosch Viande Hachée des Grisons, Camille Hakim Hashemi, Solène Livran and Elisabeth Le Coënt who are in charge of the production, distribution, press and administration of the creation of HATE, and Viande Hachée du Caire, the French company of Laetitia Dosch.

The creation of HATE is financed in large part by theaters, public organizations, authors' societies and Swiss foundations. These partners support us to their full potential and we thank them greatly!

To be completely transparent with you, here are some figures on the budget of this creation:

- rehearsal spaces at a the stud, set design, costumes, accessories, technical elements we need represent 15% of the total budget

After six weeks of research last year where Laetitia Dosch learned the first bases of dressage of a horse, she will be working with Corazon again in spring 2018, first at the stud farm of Gimel in Switzerland and then at the Théâtre de Vidy in Lausanne where the show will be created.

Each week of work at the stud farm costs around € 6,000 (£ 4,750). This money is used to pay the pension of the horse and its care; salaries of the team (Judith Zagury, Laetitia Dosch, Yuval Rozman, Lisa Como); transportation, housing and food expenses for people on the move. We therefore request your help to be able to finance two weeks of residence at the stud farm of the six currently planned.

GOAL 2: FINANCING THE LIGHTS OF THE SHOW

If our fundraising allows us to finance these two weeks of rehearsals, we would like to invest and buy projectors and other light installations necessary for an original creation. The tracks that Laetitia Dosch explore with David Perez, the light designer, and Philippe Quesne, scenographer of the show, would not fail to become luminous with your help !!! We have quantified the purchases at around € 4,000 (£ 3,500).

GOAL 3: FUND CORAZON CATERING: ALL YOU CAN EAT IS ORGANIC APPLES AND CARROTS

Corazon needs, in order to interpret the choreography that Laetitia Dosch proposes to her, rewards ... some of us are addicted to chocolate. Horses, their stuff is carrots and apples. Help us spoil it !!

The Viande Hachée du Caire association will collect the entire collection for the creation of the show HATE.