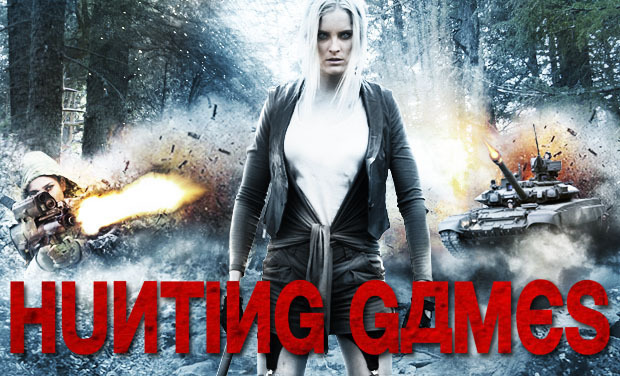 Two Russian lovers and film makers, Bogdan and Anna, set up hunting events for which they abduct young women from the Chechen countryside and use them as preys. Thrill-seeking sadists have to pay 50 000 USD to join the hunt : the one who will kill the prey first will claim the prize...Equipped with masks and cameras, the contestants supply the video makers with footage that will be broadcasted on the Dark Web.

Like this pitch ? Love fights performed by martial arts champions ? Are you excited by the idea of a genre film made by passionate people ? Then support us !

If you wish to keep up with our campaign, join us on Tumblr !

With Hunting Games, we aim to create an exceptional genre film,  born in France !

Very few of such films are currently made in France, even though this kind of movie gathers a huge community of French fans !

The Hunting Games project was born from that very observation. We wanted to make an actual action movie, ambitious enough to convince international buyers, and with a restricted budget. We already went and made it, and with the help of our friends, the crew and cast who accepted to follow us in this crazy adventure, we managed to get all the footage we need for a great movie ! Now, we need your help with post-production...

References-wise, we take from Man Hunt, Eden Lake and Robert Rodriguez' debut works ("El Mariachi", "Desperado")...If you aren't a genre film connoisseur, then Hunting Games can be considered an action movie in the wake of "Hunger Games" or "Predator", with just a speck of Tarantinian spirit. Sounds good, right ?

Hunting Games will be the first of a series of features born from the collaboration of Backbone and The Followers Company. It's also a first step to find our audience, and we need you to get things going and make other genre films with just as much hubris !

Simply to bring this movie into existence ! As we can't rely on the usual financing circuits (French cinema council, TV...) for this kind of project., crowdfunding obviously looks like the best way forward, thanks to the online community of genre film fans. What we need is your involvement !

First, we already managed to shoot most of the film's scenes. But this is merely a first step, as we aim to offer our fans a great film ! This is why we need the means to ensure the quality of our post-production, and throw in the special effects that will make Hunting Games a genre film Monument ! This will only be possible if we achieve a 100% completion of our campaign.

Second, the movie has been entirely shot in French and English, as we also want to reach an international fanbase so that everyone can feel the love. As a result, the movie needs twice the editing time. The English version of the movie will only be available if we reach 30 000 € !

Finally, we wish to add a spectacular sequence to our movie : the blowing up of a tank ! However, we will need 40 000 € to shoot this scene...anyone interested?

Beyond that milestone, your support will help us promote the movie on the long run.

Danny Glover took interest in our movie and agreed to star in it ! He makes a few appearances as The Contractor, and we went to the United States to shoot this material :

The movie was shot in French and in English to ensure an international distribution ! In France, we aim for a cinema, TV and DVD/VOD distribution. Regarding the English version, we are already in contact with US distributors !

But wait, there's more ! As we still have a few memorable scenes left to shoot, there is one in particular that we would make quite spectacular ;).

...We would downright blow up a tank !

You wish to learn more about the rewards ? Leave us an e-mail  at huntinggamesmovie[AT]gmail.com ! Here are some of the details...

Movie credits : You'll be credited as an official backer in the movie, starting with the Premiere !

Your choice ! We'll send you an e-mail for your contact information at the end of the campaign. WARNING : as much as we would love to, we cannot afford to mail this reward beyond French borders. If you pledge for a pack that includes this reward and can't have it mailed at a French address, we will send you a private download link to an HQ digital version instead !

To conceal their identities, hunters wear a mask during the Hunting Games. We will send you a copy of those masks, and you'll be able to choose between the four existing versions (two female, two male). The 6 original masks worn by the cast are also offered as rewards, along with their complete outfits. WARNING : as much as we would love to, we cannot afford to mail this reward beyond French borders. If you pledge for a pack that includes this reward and can't have it mailed at a French address, you will only get what we can send you in digital format (documents, wallpapers and HQ copies of the movie).

STEALTHY/FIERY/BRUTAL PREDATOR PACKS - Video Conferences : These will be set up on Google Hangout with either Steve Jama (our FX artisan) or Sébastien Vandenberghe, Ibrahima Keita or Vincent Parisi. Up to 9 people will be able to attend, for about 2 hours of tips and expertise on special effects makeup, pyrotechnics or fight choreography.   To make sure everyone can sign up for any of the three conferences, we will decide of a date using Doodle. WARNING : these conferences will be held in French ! If you aren't familiar with our language, bear in mind that this reward will be unlikely to get an English edition, given our tight release schedule.

You will receive a t-shirt reserved to our Kiss Bankers !

LEADER OF THE PACK - Movie Preview :

The preview(s) will be screened in Paris, in November 2014. We will have access to the SACEM movie theatre, near subway station Charles de Gaulle Étoile. The theatre can house up to 80 viewers. And of course, our cast will also be present ! Come give us your impressions on the movie once it is finally born ! WARNING : obviously, we cannot set up international previews at this point in development. If you wish to be there (which we really do too !), you will have to provide your own travel and  accommodation.

An afternoon of training with our fights choreographer and our martial arts champions ! The session will be in July, in Paris. This place is famous for housing the shooting of countless French action movies. WARNING : if you do not reside in Paris, you will have to provide your own travel and accommodation.

ARTILLERY PACK - Blow up a tank !

Well, if you are to fund the scene, why not come and shoot it with us ? You'll be able to come on the set in early July for the blowing up of the tank ! We will take care of your travel if you come from Paris, but you will have to make due on your own if you come from any other location.

An A2 poster printed just for you, and autographed ! WARNING : if you cannot have this reward mailed to a French address, we will send you a digital scan of your own autographed poster.

COLLECTOR PACK, LEVEL 1 - Shooting Documents : We will send you one of each main document used by the crew (Scenario, Worksheet, Production File and Duty Sheet). All with autographs from our cast ! WARNING : if you cannot have this reward mailed to a French address, we will send you a digital scan of your own autographed documents.

Most of the shooting has already been done in April and is now almost finished.. However, we are going to need YOU if we want to make our dream movie come to life ! Because post-production begins now, and with it the most important factor for our film's quality !

Upon reaching 20 000 euros (27 400 USD) the movie will achieve optimal post-production conditions, with better gear and more time bought from our FX teams !

At 30 000 euros (41 100 USD), we will launch post-production of the English version and be able to distribute Hunting Games internationally, hopefully to please Genre fans all over the world !