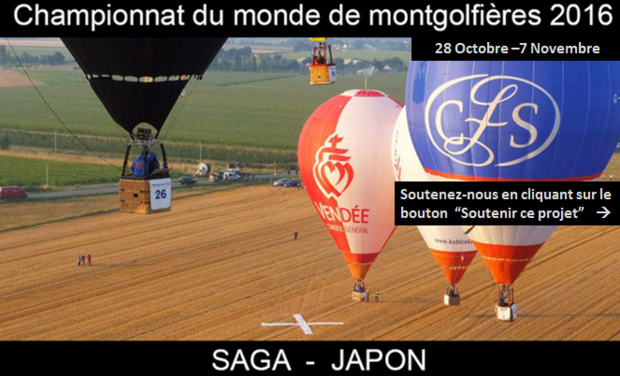 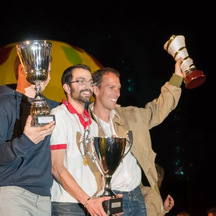 Thomas, pilot ranked #3 in France has been selected for the World Hot Air Balloon Championships in Saga (Japan).

Anne, Quentin, Thomas, Benjamin and Sophie have progressed for the last 5 years (#2 at the 2012 junior world championship in Lithuania, French champion in 2014) and ready for this adventure.

Balloon is a team sport, so we need Thomas (pilot), Benjamin (navigator) and ground crew to prepare the balloon, chase the balloon, help on strategy, give wind direction...

Only 4 french teams are going to this championship. As never before we are motivate to compete against the 105 best world pilots.

This competition will have about 15 flights from 28th October to 7th November to find the best pilot on 30 different tasks to evaluate skills, precision and strategy.

The goals is to be as close as possible from the target with the balloon. To "drive" the balloon, we go up or down to find the best wind as they have different speed and direction according to the altitide. When we are close to the target, we drop a 'marker' to show our passage.

By helping us, we could fly the flag of France and share with you our awesome trip trough pictures and videos of the event (Facebook).

You can also connect on the official website : http://sagaballoonworld2016.jp/

To be able to take part in this competition, we need to :

-Bring the crew and balloon (5500 Euro for tickets)

-We are doing 'Homestay"

So we need some help to make ends meet :4500 Euro minimum

So.... THANKS in advance for your support

If money is above our dream, we will use it for next competition