Discover exclusively the new title of the "BOOTleg" collection from ARTtitude : (A)utopic by Juan Francisco Casas. 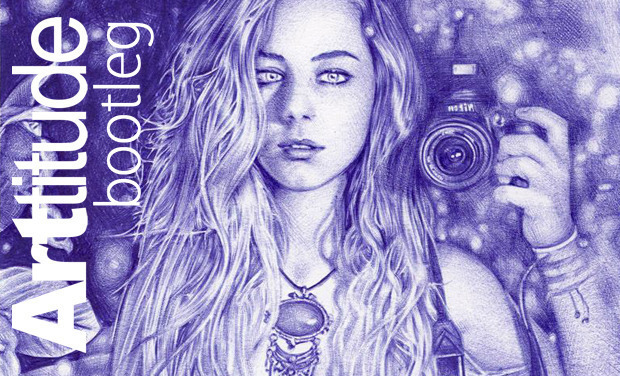 Juan Francisco Casas, the name will be familiar to you, especially if you follow the news on DRAWING IS NOT A CRIME or ARTtitude.  We were proud to feature him as the most « calor ! » artist of ARTtitude 1 and also to have him support our Drawing Is Not A Crime S01E01 exhibition.  But Juan, is first and foremost a Maestro, a sword, as Audiard would have written.

A true “Galactico”, except that his art is drawing, not football, Juan is the man who used to whisper in his Bic (pen)’s ear. This man is an extra-terrestrial, who creates his sketches exclusively using the world famous ballpoint pen. His artwork has an almost incredible photorealism.  His work has been shown worldwide  (New York, Miami, Chicago, Seoul, Singapore, London, Moscow, Munich, Paris, Mexico, Basle). Born in 1976 in La Carolina, Juan gains a Bachelor of Fine Arts degree in 1999 and a Masters in Fine Arts in 2003.  Major in his year, he completes his training with a doctorate at the unversity of Granada whilst teaching drawing.  He starts exhibiting from 2002. In 2005 he is the only Spanish representative at the Prague Biennale.   The following years, he combines exhibitions, travels, changes of residence (Berlin, Briighton, Paris…) and obtains several awards during his career, in particular from the Spanish Cultural minister, Pilar del Castillo.  Juan has published many books, including poetry. However, ironically for this story, with such a journey, Juan’s graphic tone is rather cheeky, off kilter, ‘spring break’ trend.  He recreates intimate moments from snapshots taken impromptu with his girl friends.  With the most mundane of tools, he manages to sublimate his models, makes the present moment tangible, glamourous. Anyway, having seen his drawings, you will never again feel the same way about your Bic.

(A)utopic, his fifth private exhibition at the Fernando Pradilla galery is an exhibition numbering more that sixty drawings all  produced in black and blue with a BIC, with a good choice of small formats.  The artist himself says that the title of the exhibition stems from a play on word, a mix of Auto portrait (Self portrait), Utopic, Picture, the outcome being a tribute to this latest of social media phenomenon, the selfie!

Each piece of artwork is produced from a real photo received via the various existing social networks.  Alternately photograh and model, Juan has often featured (with some pleasure) in his previous works.  In the case of (A)utopic, Juan has imposed strict specifications for his models :  Produce a selfie so that both the model and the camera (iPhone, iPad etc..) are visible in the frame.  He has received more than a hundred snapshots from all over the world for this project, has kept 60 and spent a year adapting them.

This book will enable you to discover the world of Juan Francisco Casas as well as the entire (A)utopic series.

Aside from the ARTtitude collection, the idea behind this collection was to be able to offer artists’folios, booklets of personal sketches in original format and especially outside any mainstream commercial network. The books from the BOOTleg collection will only be available from VPC and some specific points of sale such as specially selected independant bookshops.

This project, hence the notion "participative" via via Kiss Kiss Bank Bank, aims to create a link, as direct as possible, between the artist and the reader.

All participants will be credited as sponsors in the work.

A first title from the BOOTleg collection, dedicated to Bruno Leyval, has already been financed on KISS KISS BANK BANK and you can now obtain this work from our online shop at this address :  http://shop.plan9-entertainment.com/categorie-produit/bootleg/

ARTtitude in 90 seconds for the latecomers !

Today, I need your help to make this project possible.  This project, for us, has a clear participatory objective because this book will also be your book.  This project cannot exist without your help. Our wish is to create this collection in a totally independent manner.

A huge thank you to Anthony Gonzalez, a.k.a M83, who let use use one of his titles (Teen Angst) for our teaser.