Help us to produce "Kids with Guns", an intense urban thriller, presented by Les Films de l'Ours and La Mécanique. 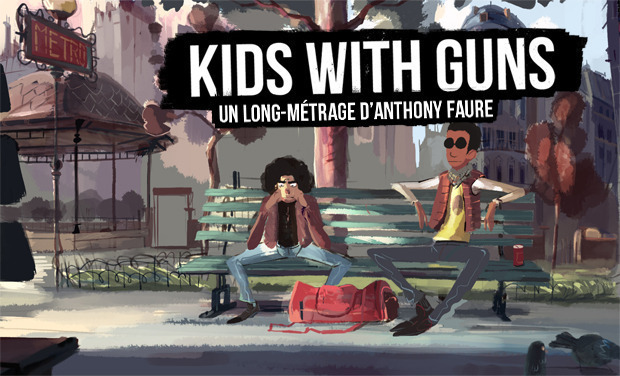 Kids with Guns is the first feature film directed by Anthony Faure, co-written with Antony Renault.

Two small dealers from Boulogne, Arno and Mo, eke out a living dealing hash, hoping to somehow make it to their dream destination: Spain. After getting on a chase with the police, they find a bag filled with a drug they don't know yet: MDMA. They decide to go to Paris' sixteenth arrondissement to sell it off to the Parisian golden youth. Their rapid success draws the attention of the real owner of the bag: a wall-eyed business student at the head of his neighbourhood drug traffic. He decides to hire them. Their collaboration, at first profitable, will be undermined by the personal vendetta of overzealous police inspector, Ratjev.

Kids with Guns is an urban thriller telling the story of two friends who make the wrong choice and find themselves in the middle of a business that goes way beyond what they expected. This story is neither a lampoon against drugs nor its praises. Drugs and especially MDMA are used as an excuse. An excuse to enter the universe depicted in the film, the universe of the golden youth: ruled by money with easy access to drugs and alcohol and the illusion to be above the law.

To face this future elite almost untouchable, only stands the police force who don't dare to take on the children of the powerful.

Kids with Guns is above all a bromance. The story of two friends who lose and find each other back, where friendship triumphs over easy money.

This feature project was conceived with guerilla tactics revealing spontaneity and a will not to wait to begin filming. Without public funding, a TV channel or a distributor, Kids with Guns is a free film. The only desires to satisfy are the ones of the authors (the screenwriters, the director and all the artistic collaborators) and of the audience, including our KissBankers who will be the first privileged viewers.

This independence will allow us to experiment freely while working with a stable scenaristic base. We do not claim to be from a new wave shaking up the narrative pattern or the production methods but we wish to question a certain idea of funding of the French cinema.

If we appeal to you, it is because we want to show we don't need much to make a great film: a good story, interesting characters and an original and inspired mise-en-scene. Inspired by the moment, a tight budget, and by the creative spontaneity of a talented and motivated crew sharing the same faith in this project.

Anthony Faure is a Franco-Venezuelan director and producer of short films. Graduate from Paris Sorbonne University in screen-writing, directing and producing, Anthony has also received a training as assistant-director. Between 2011 and 2013, he directed 5 short films of fiction of various genre (dark comedy, fantastic, comedy, etc.) In 2014, he directed La Panne in which a young writer -who can talk to the characters from his novels- has to tell his protagonist he has to die in the next volume of his adventures...

Kids with Guns is his first feature film.

Antony Renault is director and producer of short films. At the end of his third year of Film studies, he wrote and directed his first short film, L'Homme de Minuit (The Midnight Man), produced by Les Films de l'Ours and broadcasted on French TV (France 3): the story of a young boy in permanent conflict with his father who meets a mysterious man... Between 2012 and 2014, he directed two other short films and started writing several feature film screenplays. He has co-written Kids with Guns with Anthony Faure.

Les Films de l'Ours is a free and independent production company of short and feature films for cinema, founded in 2011 by Anthony Faure, Antony Renault and Florent Larriven. We develop projects of different sizes and shapes, always driven by the unique look an author has on his film. Since 2011, the company has launched many short film projects of very different genres: urban legend, romantic comedy, horror comedy, thriller, fantasy film...

La Mécanique is an association created by film students from La Sorbonne in 2009. If this organization exists, it is because we believe that there is not only one kind of film, we can always renew art, find new modes of expression. Because we believe that Cinema is not a static art, our niche is evolution, the desire to discover new things from project to project, and to always learn and do better. La Mécanique puts its expertise at the service of all those who have ideas and a different perspective on the cinema and its mode of expression in order to assist them at best in their creative process.

We're organizing a musical competition to find the songs that will be part of the Kids with Guns soundtrack. You'll find all the information on the News tab really soon. The competition is open to all, groups, musicians, composers, etc.

You can follow the progress of Kids with Guns in the News KissKissBankBank project tab. There, you will find out more about the casting, the constitution of the artistic and technical team, of scouting location, discover extracts of the storyboard, of the script, etc..

You'll also find a complete and detailed description of the various rewards offered to contributors in the New tab.

Money is the sinews of war. The preparation and implementation of a feature film is expensive, even with an all volunteer staff. The money collected on KissKissBankBank will contribute in full to achieve the best possible film.

Les Films de l'Ours and La Mécanique already provide financial and material support to the project. Unfortunately, it is not enough.

The money collected will be used, among other things, to rent shooting equipment, sound and lighting, to ensure the production management and transport during the shooting, the making of sets, costumes and other visual elements of the film as well as ensuring the postproduction of the film once the shooting finished.

You can find the repartition of the expenses provided for the shooting of Kids with Guns on the pie chart below.

Kids with Guns  is an ambitious project and we hope to bring the film to life beyond an online broadcast. For this purpose the quality must be there. 20.000€ is a large sum, but on the scale of production of a traditional film (which usually amounts to several million euros) it is ultimately very little. 20.000€ is the first level we have set ourselves. But of course, our goal is to surpass it to achieve the best possible film. More money means more shooting time, more equipment, more technicians and more efficiency.

The project leaders thank you in advance for your support. Together, let's make Kids with Guns a great adventure!

Thanks from the crew and your name in the end credits.

VOD link of the film "Kids with Guns" in HD, once finished. Previous reward included.

Exclusive "Kids with Guns" T-shirt (available in black or white and in size M and L) Previous rewards included.

Poster of the film "Kids with Guns" and four character cards drawn by our storyboarder Hadrien Bonnet. Previous rewards included.

Invitation for a day on the set of "Kids with Guns" (transport and accomodation non included) and exclusive access to the photos taken during the shooting. Previous rewards included.

Invitation for two to the Parisian premiere of the film (transport and accomodation non included). Previous rewards included.

Invitation for two to the wrap party with the crew and the cast in the Parisian area (transport and accomodation non included). Previous rewards included.

Special mention in the opening credits of the film "Kids with Guns" and exclusive access to all the stages of the making of the film (from shooting to post-production). Previous rewards included.

Invitation to dinner with the director, the producers and the two main actors in Paris (transport and accomodation non included). Previous rewards included.

Prestige Pack (Special edition DVD of the film "Kids with Guns", all the goodies related to the film, an exclusive accessory from the set) and an invitation to a private showing of the film in Paris (transport and accomodation non included). Previous rewards included.

Be the co-scriptwriter and main character of a 5 minutes short film, shot exclusively for you by the "Kids with Guns" crew. Previous rewards included.