Resurrect an inaccessible troglodyte church and help us establish a museum to admire its patrimonial treasures. 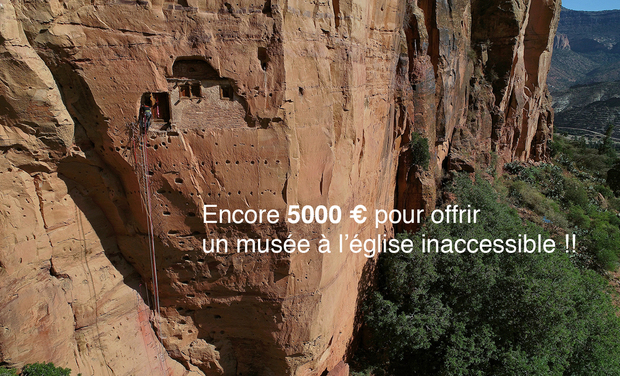 THE STORY OF A PROJECT

March 2019: Responding to the call for help from the University of Adigrat (Tigray country,  North Eastern Ethiopia), two mountaineers equipped a high cliff with climbing holds to access a troglodyte church that was dug in sandstone 30 meters above ground. Due to many landslides, the church could no longer be reached.

Maryam Dengelat is one of the many churches which the first Christians of Ethiopia dug in the rock along steep cliff sides, in the folds of mountains and at the top of sharp needles, between the sixth and the fourteenth centuries.

On the 24th of March, 2019, an Orthodox priest was hoisted along the cliff’s wall among the cheers of the villagers and of the religious dignitaries of the area. He was the first clergyman to re-enter the Maryam Dengelat church, which had been stuck in silence for more than 400 years of isolation.

The popular prophecy in the region had announced it: “People will come one day by sea and by land and will allow our priests to enter the church”.

Today, abandoning Maryam Dengelat is no longer an option. A lot of work remains before the troglodyte church can be returned to its monks and its congregations, and before historians and researchers can investigate the mysteries of this unattainable church.

AT THE ORIGINS 0F THE PROJECT: THE ADIGRAT  UNIVERSITY AND LUIGI CANTAMESSA

Created in 2015. the organization aims to protect, value and learn more about at-risk natural sites and cultural sites with high patrimonial value. The tools it uses to carry out its mission are scientific research and exploration, artistic creation, the creation and production of media-based projects, and the organization of events.

In 2016, and then in 2017, the association organized its very first scientific missions to trace the origins of life in the multiple-extreme environment of the hydrothermal site of Dallol in Ethiopia.

From March to July 2018, the exhibit ORIGINES was organized by the association. The photographs were displayed on the fences of the Luxembourg Gardens in Paris. Viewers were led on a journey of wild landscapes. The exhibit told the story of the birth of the Earth and the evolution of the living world.

Luigi Cantamessa is a historian and a philosopher. He organized a wide range of international scientific and cultural expeditions in Ethiopia, and in the Afar region in particular. Originally from the Piedmont, he settled in North Eastern Ethiopia and has been collecting information on the troglodyte churches of the Tigray region for many years. He continues to explore the cliffs of the region, looking for sites that have yet to be unearthed.

Elisabetta Galli and Giorgio Mallucci are both mountaineers and instructors at the Italian Alpine club. They are both active in the association Mountain Wilderness. They first came to Ethiopia to train local guides who were helping visitors access the beautiful church of Yemata Guh, in the Tigray. They then answered Luigi Cantamessa’s call in March of 2019 and spent three weeks as volunteers to install a via ferrata, equipping the Dengelat cliff with climbing holds.

Olivier Grunewald has been an independent photographer for 30 years. He is fascinated by nature, and he travels to the wildest part of the planet looking for exceptional landscapes and light. He is the author of more than 15 beautiful books and he has received 4 World Press Photo prizes. He has done many reports on the Tigray troglodyte churches since 2014, and he would like to participate in valuing and protecting these unique sites.

Bernadette Gilbertas is an independent journalist. She has been roaming the world with Olivier Grunewald for almost 30 years. Her passion for discoveries first started at University, where she studied, and then taught, geography. Her writing, her articles, books, documentaries, exhibits, all plead in favor of the protection of natural habitats and of the committed scientists and activists – men and women with big hearts – who dedicate their lives to this cause.

Jacques Barthelemy could have become a mathematician or a philosopher, but he chose to live life in the great outdoors and became a mountaineering expert. He led expeditions in the Sahara, in Greenland, in the Himalayas, on active volcanoes… He is captivated by images and therefore participated in the filming of many documentaries and photographic reports. His serenity pays no mind to the most perilous conditions…

Stéphane Trannoy specializes in hard-to-access work sites in his daily life. When the association asked him to lend his skills and his technical knowledge to the Maryam Dengelat church project, he did not hesitate. His passion for mountains and for nature led him to go on many trips (Nepal, Mongolia…). He views this Ethiopian project as a wonderful adventure at the service of humankind and of culture.

- Training local guides: they will be responsible for the safety of the priests, the researchers and the historians who will come to study the church and its history.

If we go beyond our initial goal, two additional phases will be considered:

- If the campaign reaches 18 000 €: we can grant a museum to the unattainable church

We would set up a museum in an existing building located at the feet of the cliffs. The treasures of this unique cultural site would be presented there. Since the site itself will not be open to everyone, the museum would display photographs of the church’s mural paintings and artefacts provided by the priests of the region. Boards with written information on the history of the church and the region would also be available.

A book dedicated to Maryam Dengelat and its rediscovery would be designed. Profits from the book sales would go to the local communities of the region.

… So that the revealed splendors of Maryam Dengelat can be contemplated by all. So that the unattainable church can have a second lease on life.

A cross to wear, but not a cross to bear!

A glimpse of the troglodyte church

A warm thank you accompanied by a photograph of the Maryam Dengelat church to use as a background image on your computer screen.

Treat yourself to a visit of the Maryam Dengelat church

In the form of a digital portfolio + the previous reward

Are you afraid of heights? Access the church without leaving your armchair

A year-long chronicle of the troglodyte church

The story of a troglodyte church told to you

Your name in a small book, which you will receive as a gift. This book tells the story of the church, and the journey to reopen it, through texts and images + all previous rewards.

Treat yourself to an art print

A 40 x 50 art print, numbered and signed by the photographer Olivier Grunewald portraying an important moment during the opening of the troglodyte church + all previous rewards

You will visit the churches of East Tigray with a specialized guide and you will reach the site of Maryam Dengelat. Room and board on site for 2 days and 2 nights in a hotel, + all previous rewards