Discover and participate to more than 25 years of making with the movie The Childhood of a Master, the incredible history of Kalu Rinpoche… 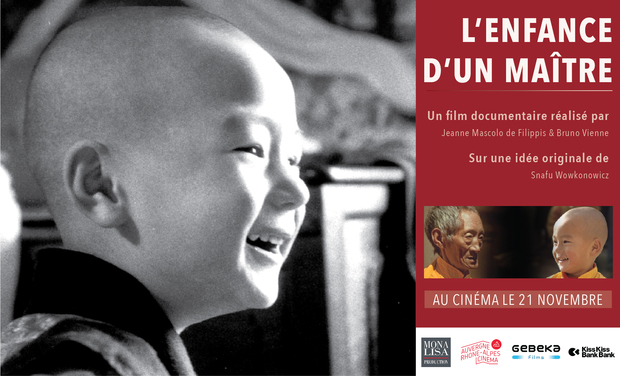 This feature-length documentary tells the incredible history of a young Tibetan master of nowadays with an extraordinary fate.

Kalu Rinpoche was born in 1990 in Darjeeling in India and he is what we call a Tulkou, that means the young reincarnation, recognized by the Dalai-Lama, of a great Tibetan master deceased in 1989 and from now on he bears his name.

Filmed from the age of his 18 months up to his entrance into adulthood, discover in this movie the unpublished path of a future spiritual master testifying the first 25 years of his life, from the questionings to the self-discovery, between tradition and modernity.

Kyabje Kalu Rinpoche was one of the most Tibetan great master. Ordered monk at the age of thirteen, at twenty-five years old he chooses to dedicate his life to the practice and becomes during twelve years a solitary hermit throughout his Himalayan retreat.

During the political unrest due to the Chinese invasion in the Tibet in 1957, Kalu Rinpoche leaves for Bhutan, then he established in India, to Sonata where he bases the monastery and the retreat centers which became his principal residence.

At that time, our Buddhist master has received a great deal of attention, the first Westerners become his followers. Encouraged by the Dalai-Lama and the Karmapa, he widely contributed to the spread of the Buddhist’s wisdom in the West where he established numerous centers of Dharma, especially the Kagyu Ling one, in France, in the region of Burgundy.

Kalu Rinpoche dies in 1989 and his young reincarnation, born in 1990, is recognized by Taï Sitoupa and His Holiness the Dalai-Lama.

Today, the young Kalu Rinpoche has a big influence on the new generation in search of spirituality. Thanks to internet, he is a young connected lama, completely aware of what the tools of the modern world can offer to his mission of global teacher.

The wish of the directors, Jeanne Mascolo and Bruno Vienne is to document in a lively and real manner how the tradition is transmitted which has always fascinated the Westerners, through a moving character, accompanied since the childhood up to his realization of adult’s life.

Through this movie, the general public will discover a facet of the complex principle of the reincarnation for the Tibetans and erase a misunderstanding. As a matter of fact, a lot of people think when they see Kalu Rinpoche that he could be the next Dalai-Lama, while it is simply impossible, the current one is still living and is not belonging to the same school. The search for the future Dalai-Lama will be effective once the existing one will die and only if the latter decides to be reincarnated or not.

They decided to film the child as often as possible and they were present in almost all the majors moments of his life. It took them some time and some patience to convince the child to accept them as much as possible next to him… Then their appointments became more and more often.

After experiencing difficult times, when Kalu Rinpoche wanted to rebel and to quit everything, he agreed to tell, animated of the particular feeling of being conditioned very young.

In a way, the movie reveals us the history of a Little Buddha, not fiction but very real. A rather unique case to be worth being told in a full-length film intended for the general public.

Only for Kalu, it is equally in the West or in his country that he is supposed to pursue his « mission ».

The intention is to give the floor to a young man who was from his birth conditioned to become a spiritual master, who first rebelled and today, serene, wishes to participate in his own way in the expansion of the Buddhism in the West.

In our time of fundamental questionings of the philosophies and diverse religions, could Kalu Rinpoche embody a new generation opened on the world in which he lives?

It is while realizing this movie that Jeanne and Bruno had the unique chance to possess 25 years of images of the most importants events of the life of our character. We decided to tell his incredible history…

Passionate by travelling, in the 80s she organized and supervised hiking tours in Asia and more specifically in Himalaya, from Pakistan to the Tibet by going through India, Nepal and Bhutan.

Member of the French Explorers Society (SEF), she realizes documentaries for the television for more than 25 years. In 1992, she produced the 52 minutes’s portrait of Alexandra David-Neel for France 2 in partnership with Antoine de Maximy, a multi-prime film in the international festivals.

Bruno Vienne has realized more than forty documentaries shot all around the world. Member of the French Explorers Society (SEF) and crewman of the expedition Tara Arctic 2006-2007 for a long drift in the ices of the North Pole.

He produces his first movie in 1988, in the Tibet, in the regions of Kham and Amdo. By meeting this high plateau nomadic population, he falls in love with the Tibetan culture.

Since then, with his friends Jeanne Mascolo de Filippis and Snafu Wowokonowicz, he dedicates a part of his life by making movies in the Himalayan areas.

Born in Chamonix, at the foot of the « Roof of Europe », Snafu Wowokonwicz passionate about mountains has to go and see the highest one… He flew at the age of 20 to the « Roof of the World ». Since this journey he decided to dedicate himself to the development of the tourism in Asia and he became in forty years a specialist of these regions.

At the same time, he meets the first major Tibetans lamaswho came in Europe, including the previous Kyabje Kalu Rinpoche. He becomes one of his disciples in 1975, follows the master’s teachings until his death in 1989 and even participates in the construction of the first retreat center at Plaige in Europe.

Snafu becomes the essential intermediary so that the team can maintain the link with the family of the reincarnation of Kalu Rinpoche. Thanks to his privileged relation, Jeanne Mascolo de Filippis and Bruno Vienne were able to start filming the child while he was officially inducted.

MONA LISA Production was created in 1991. The company stands out for new writings in the documentary. This constant desire to invent offers to MONA LISA Production the prestigious Price of the Innovation at the WILDSCREEN Festival in 2000, in Bristol-UK with the series The Invisible Invaders/Squatters and more than 100 other distinctions in the International Festivals.

Innovation, originality and quality are the essential motivations of the entire team. During the last ten years, MONA LISA developed and produces hundred hours of documentaries for the french and foreign channels. The thematic spectre of our productions is wide, ranging from Sciences to History, Archeology, Nature and the Wilde Life, including Society topics or the Culture.

Created in the fall 1997 by Marc Bonny, Jacques Kraemer and Jean-Michel Gévaudan, this society made up with a precise editorial line: distribute in movie theaters, quality films for the young audience (full-lengths, medium-lengths and short films, in animation or fiction).

Over the years, a catalog of hundreds of titles was established, with a great majority of animated films.

The company also assured a number of re-releases of classics movies for the young spectators, such as The King and the Mockingbird, The rotary table,Gulliver’s travels, The red balloon, The stolen AirshiporKoko the clown.

With 4 to 6 releases a year, Gebeka Films settled down in the landscape of the French distribution. The company appears regularly in the top 25 of the distributors with a good average of entrances by copy.

This movie is the result of an initiated adventure more than 25 years ago. By becoming the reincarnation of one of the historic masters in the Buddhism, Kalu Rinpoche did not choose his identity or his fate and at the age of 2, pressed on him an immense responsibility, to carry a thousand years old spiritual inheritance.

At the beginning, we were touched and secured by this small buddha promised to a future which overtook him. The directors began to film him in his everyday life, with his family but also during the ceremonies which gave rhythm to his life, and his travels in India, in Europe or in France. Over the weeks, months, years, bonds were created and the young boy became used to welcome our cameras sympathetically in the key moments of his childhood, his adolescence but also more recently in his life of young adult. At the same time, were born some TV documentaries, The Child Lama and The children of Buddha which lift the veil on fragments of his young child’s life.

Little by little took shape a more ambitious project,that to produce a testimony movie which gives voice to Kalu Rinpoche who became a young adult. A film in which he talks about the happy or difficult moments he crossed, a film in which he shares with a big sincerity the doubts and the questions he asks himself.

It is an authentic portrait in which we discover 25 years of the life of a young master who shows his true colors, without cheating, through images which allow us to immerge in an exceptional way in his history.

During this crazy adventure spread over a long period, it must be said that sometimes we also had doubts and that we asked ourselves many questions :

Finally, the perseverance in our desire to bring this project to fruition, but also the faith and the patience that our precious companions have granted to us like Grégory Faes, Auvergne Rhône-Alpes Cinéma or Marc Bonny from Gébéka Films, allow us today to put this movie on screen.

A unique realization, a life-long project, an extraordinary history…

The release of the film in the movie theaters is expected on November 21st of this year, much work still needs to be done, many people on piece work and a global cost more than important.

25 years of realization is dealing with the evolution of the cinema, the evolution of techniques and digital technology…with your support, your help and your encouragements, we could offer you an image reworked, cleaned, adapted to the cinema of today for your biggest comfort… With these 19 000 € we could offer you a post-production that meets your expectations and investment of this project, an immersed experience, more pleasant visually and adapted to your expectations.

We invite you to participate to this immense project of a whole life, to make to this exceptional realization a visual jewel at the heart of a Buddhist which is part in our modern world…

Call on for a fundraising campaign allows to offer to the project a worthy communication of the work done in 25 years of making. We offer you the possibility to participate in a project of a whole life. The expectation of our directors has been set high, the investment, the time spent in the field, the unique dimension profoundly human, the hours of editing rushes will allow to offer you a fascinating documentary, uncommon, redrawing the incredible life of an inspiring and touching young man.

Any help is welcome, each at their own level can contribute to the birth of this movie, every donation is necessary! Do not hesitate to contact us by e-mail or to find us during the premieres scheduled in several cinemas of France at the end of the year.

Thank you in advance to all the persons who will allow us to reach our first landing fixed to 19 000€!