Chronicles of Parisian life in a bilingual & biannual magazine. Will you join us? 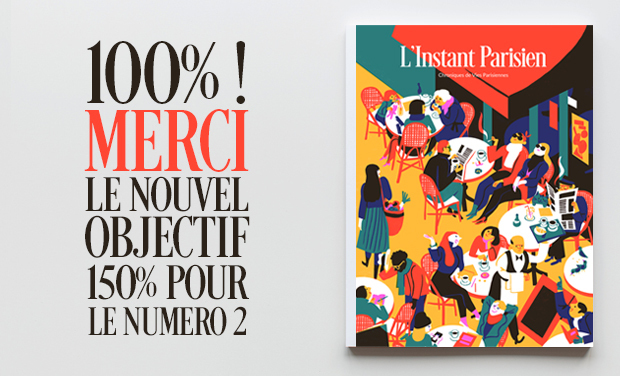 Some of you already read our website L’Instant Parisien or maybe you follow our wanderings throughout Paris on Instagram. For those who are discovering the project here on KissKissBankBank we are two behind the curtain: Laurence, former magazine journalist and Fabrice, professional photographer & videographer. Don’t let that number fool you, everything we achieve is thanks to the talented people who surround us. To follow up our digital efforts we decided to create a bilingual, biannual paper version of our Parisian adventures!

Foremost, we are aware of our editorial and professional responsibility to guarantee fair pay for all our contributors. The magazine is an independent venture, therefore, all of our crew members (freelance writers, photographers and illustrators) are paid according to the rules and rates of their respective professions. As independents, we chose to not include advertising or place disguised marketing schemes in between the lines. We want to produce a magazine that is as simple and transparent as our topics.

Our campaign goal represents the price of independence and editorial freedom. Today we are asking you to help us achieve it!

During the month of July 2015 we reflected at length on the illustration for the first cover. What epitomizes Paris? A common motif surfaced – the terraces of the city’s cafés. With that in mind, the talented illustrator Virginie Morgand created an authentic scene: girlfriends soaking in the sun, a lofty male waiter pretending not to hear chirps for his attention, an elderly woman sipping her tea... It all seemed right.

Following the tragedies that came to pass in the heart of Paris on November 13, 2015 we could not help but doubt our initial choice. Should we abandon the cover and start from scratch by erasing this terrace scene?

Our answer came in the following days as we watched brave Parisians retake their seats at the very same cafés and restaurants. An act of resistance to these attacks, pushing out fear and cementing the idea that “this is Paris and always will be.” We decided to not change our cover nor the content of the first issue. There will be images of Parisian café terraces as we witness them daily: free, multi-cultural and colorful.

Now more than ever we need to believe in these ideals. Our contribution to this movement is showing the plurality of the faces and talents that give life and radiating energy to the city that we love. The Parisians who populate this first issue are: Mary, Michiko, Mauritius, Youssouf, Simon, Ludovic, Alfi, Colette, Dana, Hitomi, Chayet, Tiphaine, Shade, Amandine, Kali, Ondine, Lodia, Lucile, etc.

In 2014 we created the website L’Instant Parisien with the intent to show the world a unique vision of Paris. We had just moved to the city and were set on giving it a fresh pair of eyes. With nods of encouragement from our longstanding Parisians friends, we set our gaze and lens upon the city of light.

We took advantage of being newly minted Parisians to explore the city’s alcoves and niches. Off we went from left bank to right, following tips and knocking on doors behind which stood those who were creating the city on a daily basis. The doors opened on to makers, artists, sweet dreamers and entrepreneurs who coolly & steadily fill up Paris with their enthusiasm and talent.

It is often said that the streets of Paris are a museum to behold with wonderment, or that the city is as perfect as a postcard. Perhaps it’s true on a certain level, yet the Paris we’ve come to know is anything but static. Over the past two years, we visited scores of ateliers and apartments where we met people from all sorts of backgrounds. The project has become an astonishing human adventure full of twists and turns, all as organic as Paris itself. From a global perspective these “Parisian Moments” give way to a contemporary city that is at once poetic, enthusiastic, sensitive, bursting with ideas, resourceful, positive, multicultural and creative.

The website’s success pushed us to dig deeper. We want to write longer stories, take more time with our encounters and surround ourselves with new voices – those of illustrators, photographers and writers. Paper is the ideal format for presenting this transition.

Enter L’Instant Parisien Part II – the paper magazine. We won’t lie that seeing print resist in a digital world makes us smile. For us, this relationship is hardly about being “pro” or “anti” anything. We come from the world of print and have also worked on the web for a long time. We believe in the cohabitation of digital and paper formats; one does not replace the other. The quality of the content is what counts. All this granted, there is no real substitute for leafing through a beautiful magazine under a tree on a sunny day.

We imagined this paper magazine as a concentration of Parisian life. Each issue will be bilingual (French-English) and present a collection of moments, chronicles of Parisian lives, and stories of men & women like us and you, who exhibit how Paris has transformed before our eyes.

Inside the 216 pages of our issue No 1 you will come across (among other stories):

- A lovely patch of woods, which has made its home between two buildings and is now the joy of all its neighbors

- Two Parisian publishers who traded their posh Alésia apartment for a home with ocean views.

In honor of the sublime artwork produced by illustrator Virginie Morgand for the cover of issue No 1, which is centered on vibrant visuals of a Parisian café scene, we want each reward to share in the soul of the theme. We hope that you will feel inspired to send the cards to those you care about, jot and trace on all the pages of your notebook, promenade with your bag, or happily dress a wall with one of the 100 silkscreen prints created by the Atelier Dupont in Paris. Each reward is produced in France and most will be delivered before Christmas (FRANCE). We are very proud to have Virginie Morgand’s work associated with the launch of our first magazine. Mille mercis to you Virginie! We ship worldwide.

We are a small team who dreams of sustaining a living through the creation of a “small media” publication. That independence means we will not sell advertising space or disguise commercial schemes in our content, and that we need your help to make it a reality. Introducing the group behind this first issue... Laurence Guilloud, the editor-in-chief. Fabrice Le Dantec, the photographer. Kiel Bonhomme, the translator. Lindsey Tramuta, the American in Paris and food chronicler. Virginie Morgand, our brilliant cover artist and creator of our rewards. Lucile Piketty and Amandine Delaunay, our wonderful illustrators. And of course the most Parisian of proofreaders, Audrey Demarre.

The images are captured in time, the stories have been written and their accompanying illustrations are chosen. In so many words the magazine from an editorial standpoint is a wrap. That said, the most important step in this journey still awaits: printing the magazine! That is where you wonderful KissKissBankers come in.

In order to equitably remunerate the work of our illustrators (Virginie, Lucile and Amandine), our food chronicler (Lindsey), and our translator (Kiel) we need your financial support. Their work is integral to L’Instant Parisien growing in all the ways that we know it can. This campaign will also finance the printing our issue No 1 in France on a beautiful, carefully selected paper. We have taken the time to consider the ideal conditions for bringing this project to light, and your participation is key.

The initial goal of 10,000 € will allow us to print 2,000 copies and fund the creation of all our rewards. Printing this quantity at the level of quality we have defined represents a cost of 4 euros H.T. per copy.

What happens if we surpass our primary goal? Well...

This campaign represents the opportunity to begin the production of a dream and the chance to share our passion with a new audience. If you have enjoyed reading us thus far; if you believe that a magazine without publicity has its place on newsstands; if you feel that our contributors deserve to be fairly compensated for their work... This is the opportunity to join the L’Instant Parisien KissKissBankBank community!

Thank you and À bientôt (“see you soon”) on the web and in print!

We would like to kick things off with a big thank you! As a token of our appreciation for your support we will send you a digital version of one L’Instant Parisien story via email in February.

3 CARDS. The “Parisian Cafés” mini collection was drawn by illustrator Virginie Morgand uniquely for the launch of our magazine. The 10x15cm (20x15cm when open) cards are printed on 285-gram paper (fabricated in Brittany, France with the help of www.monsieurpapier.fr). Printed with love in France! The three cards will be delivered before Christmas (FRANCE) alongside their festively hued envelopes just in time to send out your joyful well-wishes. Click on the image to zoom.

1 NOTEBOOK (128 PAGES). What could be better than perching on the terrace of a Parisian café and letting your pen run across the page at the pace of your inspirations? We dreamed of a notebook resembling a book and our wish came true. This product of France features illustrations by Virginie Morgand on the front and back covers, A5 format sheets, natural paper, and includes a bookmark. With delivery before Christmas (FRANCE), this is the perfect place for writing down all of your 2016 resolutions. Click on the image to zoom.

1 FAIR TRADE COTTON TOTE BAG. 230 young ladies and not one more (ok, maybe a few young men too) will be stepping and strolling with a bag illustrated by Virginie Morgand draped over their shoulder. The tote will be two-toned and silkscreen printed in a Parisian atelier. This reward will also be delivered before Christmas (FRANCE). Click on the image to zoom.

THE PAPER MAGAZINE + 3 CARDS. If you’re already a reader of the site www.linstantparisien.com we are confident that you will appreciate the stories & profiles we reserved for the first issue of the magazine. A number to remember? 216. That is the number of pages of our “No 1”, which are to be printed in France on lovely, hand-chosen paper. All content in the magazine is in French and English. You will receive this reward at the moment of its publication beginning of february. Click on the image to zoom.

1 SILKSCREEN PRINT OF THE COVER + THE PAPER MAGAZINE + 3 CARDS + 1 NOTEBOOK. In collaboration with Virginie Morgand, Paris’ Atelier Dupont created a XXL (50x70cm) silkscreen printed version of the magazine’s cover. It took an entire week’s work with many, many ink dye tests to create this special series and the results are wondrous. For us, this is much more than a reward, it is an authentic collector’s item. Each of the 100 reproductions are individually numbered and signed by Virginie. The silkscreen print comes without frame. You will receive your print (in reinforced protective packaging) before Christmas (FRANCE) while the remainder of your rewards will arrive with the magazine beginning of February.