Documentary film "THE GOLDEN CHAIN" : tells the moving story of the Paper Brigade, a small group of Jewish poets, writers and intellectual. 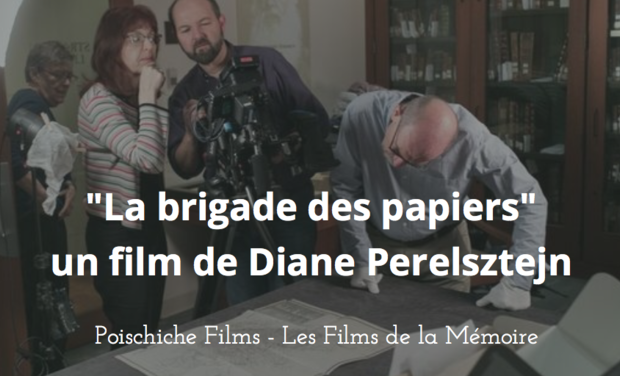 The Golden chain tells the moving history of the Brigade of Papers, group of 40 Jews, poets, writers and intellectuals who during the Nazi activity of Vilna (Vilnius today) in Lithuania, risked their life to save from the destruction of the collections of Jewish libraries of the city, from Poland, from Belarus and from Russia.

In 1939, Vilnius is " east Jerusalem " epicenter of the Ashkenazi culture with more than hundred synagogues and the very numerous public or private libraries. They receive all the big reference books of a millennium of Jewish culture in the Eastern Europe, in the Yiddish, in the Hebrew, in Russian, in Polish... Some are very rare and very old.

The drama begins in June, 1941, with the German occupation which is going to last until July, 1944. The Nazis are going to proceed to the physical elimination of 60 000 Jews - "Shoah by balls" - but, besides, they will destroy these books to remove the culture, the Jewish identity. All the works are swiped, including those of Slavic culture whom the Nazis also want to eliminate.

Unable to read the language of Eastern Europe, the Nazis force about forty Jewish intellectuals to select the most important books to send them to "the Institute of the Nazi party for the study of the Jewish question". Others will be destroyed.

These intellectuals - that we nicknamed "The brigade of papers" and which will be murdered for the most part - do not give up. They are going to hide thousands of precious books at the risk of their life. In Germany, in 1945, the Allies will find in Frankfurt the boxes of books sent for the so-called "Institute". They will be centralized in the YIVO of New York.

From 1947, with the rise of the Stalinist anti-Semitism, the survivors are again afraid for their life and their cultural treasures. They run away from Lithuania by taking a part of the works with them.

When other ideological and brutal dictatorships destroy thousand-year-old works, this movie tells the history of these Resistance fighters of "The paper brigade" and reveals us the wealth of these exceptional books saved from the Nazi inhumanity. In New York, Paris, Tel Aviv and Vilnius the saved books are consulted, studied and are passed around from now on for the pleasure to discover them or to grow rich of this immense culture.

With Bernard Suchecky and Diane Perelsztejn, we realized that a whole piece of the history of Shoah was explored hardly, worth knowing the systematic, relentless, obsessional destruction, by the Nazis of any track of Jewish culture in busy Europe. The golden chain - Die goldènè keyt, is, to our knowledge, the first documentary which reveals the scale of the will of destruction of the Jewish culture by the Nazis.

Our documentary underlines the determined resistance of the Jews to survive as much as to protect the cultural media of their identity. But the history of this fight for the culture does not stop in the Second World War. The Brigadiste was also confronted with the totalitarian logic of the Stalinist power. The movie takes place at the heart of the fight of the man for the freedom of thought. To assure their domination, totalitarianisms need to remove the tools of the free thought and at first, the books. The close current event dedicates the contemporaneousness of the project. Recent rescues occur. We think of the treasures of the museum of Kabul which were hidden by the employees of the museum before the arrival of the Talibans or from the destructions of Daesh in the city of Palmyre.

We know how much the Nazi machine wanted to crush the Jews up to the last one. The history of the " brigade of papers " reveals us how this machine wanted, besides, to pursue up to the end its morbid project: destroy the knowledge, the history, the intellectual search by eliminating its memory, its books, its culture. But once more, men and women got up, associating courage and skill, to neutralize the devastating action of the Nazis and protect the main part. The meeting with " The movies of the memory " and with Diane Perelsztejn very fast convinced me that this exceptional history must be brought to the credit of the terrible and tragic Big book of Shoah.

This movie proceeds of a personal progress, that of my split up Jewish and Yiddish identity. He(it) examines my place in the golden chain(channel), the goldènè keyt di in Yiddish, the Yiddish and Jewish culture - reason for being of the action(share) of resistance of the " brigade of papers ". My approach(initiative) of realization is dictated by the question: what would I have made if I had been instead of "brigadistes" selected by the Nazis to destroy their own culture? I cannot imagine him(it). Their history challenges the imagination, and they were aware of it. That is why they buried, with the cultural treasures that they saved, secret columns(chronicles), notes(marks) and photos taken furtively and poems consisted in the ghetto: " I do not know if I shall survive or if I shall see again these lines one day. But if somebody, somewhere, fell on them, I would want to tell him my last wish: can one day these papers of a direct witness reach the land of the living, so that it knows " (Herman Kruk's secret Column, person in charge of " The brigade of papers ", extracts dated September 4th, 1941). The story which accompanies this movie belongs to the first person, however it should fade most of the time for the benefit of the images and the sounds only carrying the feelings evoked here by these columns and secret notes.

In the face of the authenticity of the testimonies of "brigadistes", in the face of(in front of) the diversity and in the correctness of the feelings which they express with a lot of restraint there, I hand over to them and I put myself simply in their listening! I also go to the discovery of the cultural treasures - liturgical objects, rare, handwritten books, precious objects - which they saved and we shall question them. Maybe they can again deliver to the screen an increasing of information on themselves, on their history, on their rescue? I led this investigation in the places where are kept(preserved) the surviving collections, in New York, Paris, Tel Aviv and Vilnius. With Bernard Suchecky, we rediscovered books saved from the Nazi destruction... This narrative will be weaved on a bottom of photographic and film archives and current images of the places which still testify of their history.

The historian Bernard Suchecky accompanies me in the investigation by questioning both the surviving collections and the papers of "brigadistes". He is endowed with an excellent presence in the screen. His voice gets the attention, he evolves uninhibitedly and posts a soft sensibility. He embodies the survival of the Yiddish but how long...

The shooting took place, we need your support for :

- Subtitle the movie for a French and English version

- Allow the movie a life in cinema