LAND ART : TO PUT UP « THE CARAVAN », SYMBOL OF PEACE AND OF OUR FUTURE, ON THE BORDER AT THE TENDE PASS 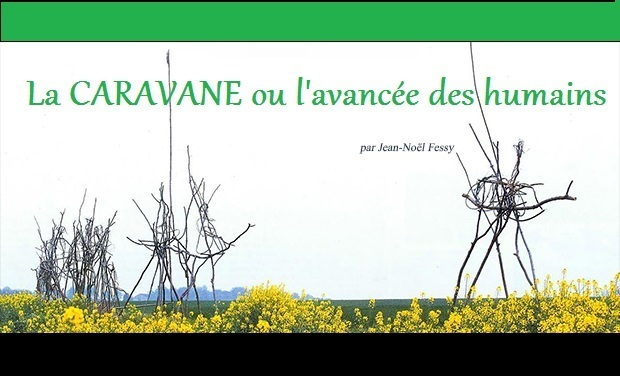 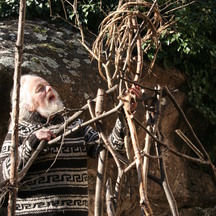 I chose to work upon this topic, caravans on the move, first of all because I've always been fascinated by their beauty : thin Lifelines through the desert void, fragile yet resilient, noble and daring. To begin with, I drew inspiration from nomadic peoples, Tuaregs, Amerindians, Mongols, but subsequently the work has evolved and deals now mostly with the human pilgrimage without reference to a particular civilisation or era. Its aim is to underline the extraordinary beauty of our fragile and unique wandering.

A travelling caravan is an allegory of our adventure, we the children of Mother Earth . Its survival, like our own, depends on mutual goodwill between its members as well as the proper use of its limited resources. We seem to me to be fortunate to live through a exhilarating « key epoch » of History, of our story. Consequently, it is essential for us to get along well and to be properly organized, otherwise... ? Current news stories, highlighting wether the prowling winds of war and violence or those of economic, social or ecological miseries all serve to confirm the urgency of this call.

By supporting this project, YOU can decide to help this voice be heard, this appeal be seen.

picture: "the Guide" and myself.

Two camels on the « pétanque » of St Paul de Vence

This sculpture will then figure, along at least a good 100 meters, life size, the advance of a caravan, a crowd travelling along with its goods, vehicles and pack animals. To that linear column a few artistic elements will be added, quoting Goya, Dali, Dürer, Cervantes... As pictures of previous realizations do show, it is built with branches and vines, strongly anchored to the ground. It certainly isn't everlasting - like us - weather and time will wear it out, but experience proves it should last for monthes and will be still standing in the summer of 2016.

video : the pass of Tende and its fort

For its sixth bivouac the idea is to construct it at the top of pass of Tende which for centuries has been a natural border between Italy & France, finally pacified in the course of the european history. It is thus a perfect and symbolic spot to express the inner meaning of the Caravan : the nearby fort, built to divide peoples, is brutal, massive, useless ; in contrast the Caravan will be light and flowing, a physical and cultural link between peoples. Aesthetically, high on this ridge almost 2 000 meters high, the work will clearly stand out against the sky, positioned so that it can easily be viewed as a single entity.

It will be a point of interest and convergence for the visitors of both sides, Tende and the Roya valley & Limone and the Vermenagna valley, espacially as, since it is reachable by car, it is already a much frequented place. The mayors of both sides have approved the project.

I see this work as handsome and meaningful. Altogether it is artistic, ecological and loaded with a strong significance.

Somehow it is my « fétish » work. The caravan journeying by definition from one bivouac to the next, it has already travelled a long way. Apart from installing it many times on a limited scale, either outside or within art galleries or shopping malls, I've also had the opportunity to make five full-scale installations of this work, that's to say over 100 meters long, on each occasion it evolved, both in shape and spirit.

video : at the château d'O, Montpellier

It has thus been :Tuareg for a theater festival in the park of the « château d'O » in Montpellier.

Advancing futuristically in the Futuroscope, the amusement park near Poitiers.

Standing alone between fields of wheat and rapeseed in Gesves near Namur, Belgium, for the symposium « la fête de mai ».

It migrated to the church of Châtel Montagne, Allier, for another symposium.

Its fifth bivouac, was at the northern end of the Baltic sea for for the Lulea° Fine Arts Biennale.

I also tried to take it to Belfast at the time of the tragic events there. Passing through the fence from one side to the other it would have been charged with meaning. Alas, distance, lack of contacts and means (Kisskissbankbank didn't exist !) made it impossible for me to achieve.

From an ecological stand it is soft : materials grow naturally and their assembly is energy sober. But for the use of a wireless drill, the main tools are saws, pliers and pruning shears.

It takes two or three weeks to a single person to build such an installation, maybe a little more for me since I count 65. This is why I want and hope to find helpers within my artist-friends, or fine art students, or devoted volunteers. Help will be welcome in the spring, making it team work.

WHAT WILL YOUR MONEY BE USED FOR ?

Fact is I don't really need to be paid since I am now retired, slenderly but adequately pensioned ; but I can't afford to finance the project from my pocket.

Cost of tools and materials is low.

Transportation of goods and people needs a little more.

There is also the cost of the helper's housing. I intend to camp on the spot, 2 000 meters high - we'll got to be equiped - both to merge within this landscape closer to the stars and to avoid transportation (40 km round trip and a long wait at the one way tunnel.)

I also want to pay the helpers, a minimum.

There is also the cost of communications : medias, advertising, noticeboards, vernissage.

The cost of the goodies I will gladly hand you out.

And finally the 8 % for Kisskissbankbank that's got to live.

This all comes up to roughly 2 000 €. If the collection is more generous the Caravan will extend further, an extra 100 meters should come to a further 1 000 €.

sketch of the project on the spot

Winter : putting the project on the net.

Spring : building starts as soon as snow has melted.

Summer : the Caravan is standing and goes on.

To each of you, a big thanks for your help. You will get informed of the growing up of the CARAVAN through email, both images & informations, at least once a month. And I'll be eventually happy to wellcome you, this summer, on the spot. Less than 10 €, you're probably broke and can't do more. That's something I know pretty well and my thanks are even more sincere.

You will receive a picture, paper, 15 x 20, of the completed CARAVAN in due time.

You will receive the picture above, plus a printed sketch on bristol, 10,5 x 20.

You will receive a numbered sketch of the CARAVAN on the spot, on a paper 180g, A4.

You will receive an original & unique sketch, china ink on thick bristol, A4, ready to be hanged on a wall.

You will receive a little statue of an element of the CARAVAN, built in silvered and welded wire, set on a wooden base.

You will receive a statue of an element of the CARAVAN, a little bigger than the wire one, built with small branches, set on a wooden base.

Above this amount you will receive an original and unique sketch, china ink, 37 x 13, framed, under glass. Or a couple of statuettes.