Sound immersion in Beirut. Love stories between religion and modernity. Listen to the Lebanese youth... 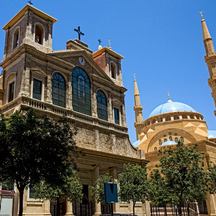 Since the first civil union law has not yet evolved. With this exception , the Lebanese would see the birth of a rule :  have the choice to marry through a religious institution or marry without it.

This new union triggered our interest in Lebanon. We then ask : what solutions present themselves to young Lebanese who want to marry, but not religiously For these young people who want to be less influenced by religion and traditions , the first option is to marry abroad.

The objective of our radio report is to find out  whether a second option is possible, within the country this time …

A report interacting with you. How?

First, a 15 minutes sound immersion presented as a radio report Secondly, sound capsules shorter format and photos will fit into a web page. One way to extend the discussion,to make you active in this project, we will post a serie of questions you can answer if you want. An example of questions: "If your family does not accept the religion of your partner, would you put an end to your relationship?"

Our project stems from our desire to bring a debate on this subject which in our eyes  is human and universal. After all, love stories are unpredictable ...

This project is also part of our end work of our journalism studies at IHECS.

The duo Nadia& Sarah : Student in journalism at IHECS we share a passion for travel and cultural discoveries.  Therefore it is natural that we turned to the investigation of a new culture.

Nadia (23 years old): "I myself grew shared between several cultures namely Rwanda and Congo on the one hand and the French and Dutch culture on the other. Cultural challenges it's a little part of my lifestyle. "

Sarah (22 years old): "Last year, I had the opportunity to meet with Lebanese during my 9 months trip

in Australia.They became friends, and gave me the desire to know more about the culture of their country. I thank them,for stiring my curiosity ! »

Why do we need your contributions ?

We are fortunate to have a local contact to accommodate us cheaply, thereby reducing much of our housing costs. Thanks to your donations we will be able to fund eight days of fieldwork in Beirut.

If your donations exceed our expectations we will call a webmaster to provide you with a better website to inform you while having fun !

But do not forget that if we do not reach our goal of € 1,500 , donations will fall to zero. That 's why we count on you to help us spread our kkbb page ! We'll also put our hearts to extend our audience.

Thank you to all KissKissBankers for your support and future careers as journalists open to the world !

Thank you, your name will appear on the website and you will receive an invitation to the projection