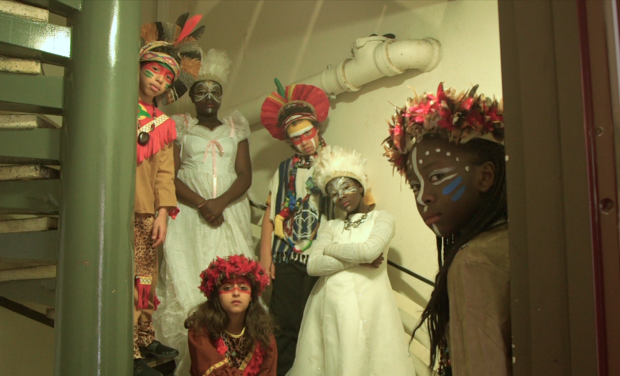 On the night of November 2nd 2019, chaos descended upon Chanteloup-les-Vignes: the circus tent, permanent home of the Compagnie des Contraires, at the feet of the Noé Ghetto, was targeted by arson.
Not only was it the circus tent that was attacked, but also the social and artistic work of the Compagnie des Contraires - founded by Neusa Thomasi, of Brazilian origins.For two years, the director Léa Rinaldi has been following Neusa in her hands-on work. The images she shot of this unique, magical place testify to Neusa Thomasi’s strength and will power. No matter the hurdles, Neusa continues to pass on her love for the art to the children. With this movie, we want to shine a light on this cultural and truly collaborative action carried by a strong woman dedicated to serving the art and the future generations.

For 26 years, Neusa has been deploying an impressive positive energy in Chanteloup-les-Vignes. It took 20 years for the public services to recognize her work and to support the project of the Compagnie des Contraires by building a solid circus tent. But only a night sufficed to burn it down to ashes.

But its spirit remains strong, and a long way to reconstruction awaits. “The circus tent will be built again” promised the mayor of Chanteloup. Like a phoenix being reborn from its ashes, art will prevail, and Neusa and the Compagnie des Contraires will be the torch.
For over two decades, through the prism of performing arts, the director Neusa Thomasi and her Compagnie des Contraires have been taking action in the cultural life of the city Chanteloup-les-Vignes, in the suburbs of Paris.

This troop, originally wandering the streets of the city before settling in the circus tent in the heart of the Noé suburb, gives the opportunity for the youth to participate in the creation of shows with professionals.

By following Neusa and four children - each with a different background - the movie shows us how the work of the troop embodies social work: prevention and promotion of civic rights and togetherness. The symbol of its success is the solid circus tent unveiled in January 2018, and then ravaged by arson last November 2nd...
Chanteloup-les-Vignes is a city of 10 000 inhabitants, located 30km north of Paris. At the foot of the city lies the Noé ghetto, a council estate built with blocks of flats where the movie La Haine was shot.

When, in 1993, Neusa Thomasi arrived in this city, she discovered a cultural wasteland and people who did not live together. This gloomy assessment made her act quickly through artistic activities in the streets (inclusive and easy to set in motion).

Driving around in her flowered van, she targeted the youth of the city - offering activities and developing shows, even in the face of a hostile reaction from many parts of the local population.

But Neusa never gave up and her burned down van was soon to be replaced by a circus tent and then a solid building, which our documentary will follow its construction, destruction and rebirth, while presenting the creation of the shows of the troop.

The Noé ghetto has been fraught with many of the problems and issues that are typically associated with “difficult” suburbs...

Meanwhile, Neusa and her colourful van were roaming around the heart of Chanteloup-les-Vignes, entertaining children with workshops.

For this director of circus and theatrical representations, the goal, more than cultural, is to gather people from all the horizons under a same roof (the circus tent). A free space where kids and their parents, sometimes from countries struggling or simply ignoring one another, can come together around a collective work of art.

Twenty years later, our movie shows the results of this action which, without hurdles, succeeded in recreating social bond through projects that kids of all ages have now made their own.

A colourful, tall, blond Brazilian, Neusa Thomasi is the main character of this story - her story. If we start with this depiction it is because her look and her accent catch instantly the camera and the audience. She’s the kind of heroine that aims for the impossible and succeeds.

We follow her from workshop to workshop, under the circus tent or on the street where she directs poetic and quirky shows right by the council estate buildings. Under the pressure of the present, forced to improvise, Neusa has to adapt to the urgency staging, which is actually the foundation of her creative and humanist craft. In this way, our camera won’t shoot the strict composition of the staging process conceived through steps, but the true technical and emotional volatility of the director, her team and especially the children.

The movie observes the constant adjustment to the scenery, time and the hazards of the collaboration between social classes, generations and cultures…
Neusa holds on, she drives participants and gives them enough space to improvise. She works on short creation that allows time management for everyone. She’s a gymnast that aims to release and achieve the poetry of the moment. Suddenly, in the course of a show between buildings, a juggler, a made up actor, a theme (love/environment) give us the chance to glimpse at a small miracle of grace and lyrical act. The audience forgets about the origins of each participant and simply embraces their togetherness.

This poetic story of a fight for arts and culture is also filtered through the point of view of four children. Their particular trajectories complete the immersive portrait of the Compagnie des Contraires that the movie sets lights on.

Going back and forth to the circus tent from their neighbourhood or playing on the streets, these four children evolve and learn a little more every day - either through collaboration with others or by themselves in the quiet of rehearsals.
Neusa and the kids' wanderings are punctuated by short images of the troop's performances in the center of the city. The concrete scenery and the cliché attached to it transform into a stage where oneness and joy surpass the contradictions. In these moments, the movie is no longer a documentary or a fiction, but a film that moves beyond into a place suspended between worlds; it becomes a metaphor of the Compagnie des Contraires’ gesture.

Another metaphor structuring the story is the gradual construction and reconstruction of the solid circus tent. This new step for the troop concludes a long, hard toil of integration into the heart of the city that has been undertaken by Neusa since 1993. Her itinerant van, which first garnered hostility from some parts of the population, has now became a circus tent: a city establishment.
In 20 years, the compagnie has taken roots and today is an undeniable element of togetherness at Chanteloup-les-Vignes.
We thought of ending the movie with the inauguration show of the new circus tent. In front of parents and inhabitants of the city, the artists to be perform their feat and gather their differences for a show of circus, theater and stand up… Such as an adaptation of the play inspired by the philosopher Diogenes:

"There are times when change unfolds so gradually that you aren't even aware of it until it's already happened. At other times you can see the changes happening before your eyes as they take place, step by step. And then there are moments when things happen all at once, a little like when in winter you go to bed one evening like the others, and when you wake up in the morning, everything is covered with snow.”

Of course art can’t do everything, it would be too much to ask. The circus top which is to be rebuilt doesn’t mean the end of issues for our main characters. There are no miracles and our movie isn't trying to prove there is; rather, it's actually trying catch the spur of gracefulness. It aims to find the poetry that unifies contradictions and helps set a course to those who lack one. It shows that far from overwhelming clichés about ghettos or absurd fairy tales hopes, a space for people such as Neusa and her troop does exist and that artists and children can and know how to shape the present and get the best out of it.

Léa Rinaldi is a director and independant producer (Aléa Films).

In 2011, she created the production company Aléa Films with Stéphane Plat. Invited by Jim Jarmusch on two of his movies: “The Limits of Control” and “Only Lovers Left Alive”, she directed two 52’ documentaries: “Behind Jim Jarmusch” and “Travelling at Night with Jim Jarmusch”. “Esto es lo que hay” is her first feature length documentary, released in September 2015; an intimate and modern portrait of a resistant Cuban hip hop group Los Aldeanos. On June 12th 2019, “Sillages”, her second feature film, was released; a documentary about Ian Lipinski, the skipper who twice won the Mini Transat race.

Member of the Citizenship award at Cannes Festival 2018 and involved with the 50/50 collective, Léa Rinadi is a young committed director.

- Awarded at Festival of Human Rights.

For a few years now, French cinema has been reliant on crowdfunding and generous donors like yourself! Documentary is the ultimate genre that needs your support to see through projects.

In the same way that Neusa works the urgency staging form, our work as producers is more than ever an emergency production. The time has come for this project to get the support it deserves so that the biggest audience possible can witness the work of the Compagnie des Contraires.

Until today, we’ve received a number negative answers to our grant applications. Their argument: this movie is an “unmpteenth movie about ghettos”. But it isn't; it's a striking and unique movie, even more so today. As such, more than ever today, we need to come together and support this project and through it, Neusa’s actions and values. Solidarity through art!

We are asking you to JOIN US in this adventure and fight for success, education, art and culture.

We've already had many hours of rushes, but the recent events move us to keep filming until the opening of the new circus tent. Before this arson, the budget for our movie was €300,000. Now we have to make adjustment and increase it.

More than needing to make this movie, it is our duty to pay tribute to this out of the ordinary place of creation, solidarity and cultural action.