Take part in the adventure of the most wonderful school in the world by helping us to distribute this documentary in movie theatres ! 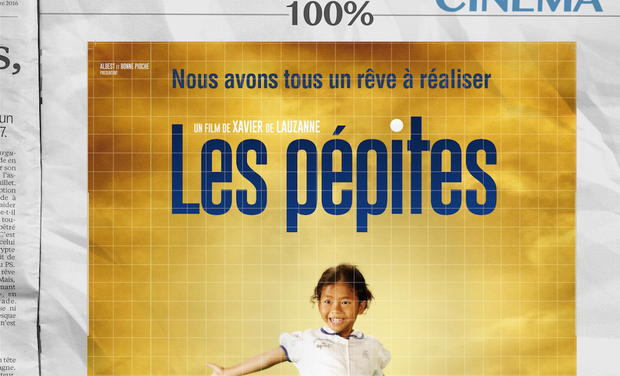 When arriving in Cambodia 25 years ago, Christian and Marie-France des Pallières discovered the inhuman daily life of the children in Phnom-Penh, forced to dig in huge open-air garbage dumps in order to find food and survive.

Step by step, they fought to take them out of this hell and change their lives. And what was only a small nursery near the garbage dump at the beginning became one of the most wonderful schools in the world, the one of the association «Pour un Sourire d'Enfant» (For a Child's Smile).

«If PSE hadn't existed, I wouldn't be here, I probably would have died on the garbage dump ...» (Sok Nov)

«PSE started on that day in 1995 where we saw those children eat in the garbage of the open-air dump in Stung Meanchey in Phnom-Penh. It made me want to scream ! After seing that, it was just impossible to go on with our usual lives. Something had to be done.» (Christian des Pallières)

Through several testimonies and moments of life, Les Pépites shares the deeply moving fight of this french couple to give 10 000 cambodian children their life back and a future.

Directed by Xavier de Lauzanne, it will be realeased in movie theatres on October 5th, to celebrate the 20 years of the association « Pour Un Sourire d’Enfant » founded by Christian and Marie-Pierre.

10 years ago, Xavier de Lauzanne directed a 52mn documentary on « Pour Un Sourire d’Enfant » for the TV channel France 5. The story was so powerful that it was obvious it had to be shown on the big screen. Thus, Xavier decided to shoot this documentary with the ambition of making it a true moment of cinema.

Les Pépites was thought for the big screen from day 1. Emotions we shared with an audience, in a movie theatre, are always much stronger than alone in front of a TV. That's what Xavier had in mind when he directed his documentary. He shot during several weeks in Phnom-Penh using a technical equipment that allowed him to capture unique scenes and moments of grace. These scenes, along with images of children from as far as 20 years ago, shine a light on their unbelievable destiny, and bring us in an emotional rollercoaster with an optimistic ending.

Passionate about the visual arts, he developped his filmaking skills after he first met the founders of "Pour un Sourire d'Enfant" 15 years ago. He shot the communication trailer of the association, and then from 2002 to 2005 he directed several documentaries in France and abroad for TV channels. He then directed The lord of Darjeeling,The Students' Goncourt, and In one voice, a documentary following an orchestra composed of both israelians and palestinians musicians, that received several awards in festivals.

Founded by Yves Darondeau, Christophe Lioud et Emmanuel Priou in 1993, Bonne Pioche produced among other movies The March of the Penguins  and the Fox and the Child, and several TV shows on adventurous trips. Faithful to its editorial line oriented toward a family audience, Bonne Pioche wishes to surprise the spectators with original and inspiring stories, that carry them in unexpected places full of emotions.

Since 1992, Rezo Films discover young talents and defend accomplished directors. Founded by Jean-Michel Rey, Philippe Liégeois and Nadia Lssoujade, Rezo Films has distributed over 200 movies and advocates an ambitious cinema, as well as a popular one.

Les Pépites is going to be released in movie theatres very soon. Why, then, do we need your help ?

The fact is that, despite the commitment of several partners, giving a decent exposure to a documentary shot for the big screen is very complicated. The documentary is a genre that is often considered less appealing than fiction, where subtantial investments are hard to obtain. As a result, Les Pépites will be released discretely, with very few promotion. There is a big risk, unfortunately, that it will remain unnoticed.

To change this mentality, we need the spectators' support... your support ! We strongly believe in the ability of Les Pépites to make a positive impact on our society. It is a beautiful story with images as powerful and emotional as the best fictions. Its inspiring message makes it a necessary and meaningful movie.

We are convinced that Les Pépites can draw people's attention and have a real social impact. However, to make this possible, the audience has to be aware that this documentary even exists ! People need to have heard of it through the radio, billboards in the street, trailers in the cinema, or advertisements in the newpapers. With your help, we will be able to give this opportunity to Les Pépites, and prove that documentaries deserve to be on the big screen !

Thank you ! It might be a small step for you but it's a big one for "Les Pépites" !

Thank you for your support ! We are going to praise you on social media (if you're okay with it)

Wow ! You offer a half centimeter square to Les Pépites in big national daily newspaper ! Every mosaic is made of small tiles, you just added yours.

It's becoming serious ! You offer 1cm² to Les Pépites in a big daily newspaper. THANK YOU !!!

You're a nugget ! You offer 2cm² in a big daily newspaper to the movie!

You offer 3cm² ! To thank you, we are sending you the movie poster signed by the director !

You offer 4cm² ! To thank you, we are sending you the amazing soundtrack of the movie, awarded at the Sunny Side of the Doc !

Wow !!! You offer 5cm² to Les Pépites (the size of a stamp !) in a big daily newspaper! To thank you, we are sending you a beautiful cotton bag "Les Pépites".

THANK YOU !!!! You offer 10cm² to "Les Pépites" (two stamps !) in a big daily newspaperl ! To thank you, we are sending the book "Les Pépites", published by Albin Michel.

We are going to blush !! 15cm² offered in a big daily newspaper ! To thank, we are sending you the book "Les Pépites" (Albin Michel) signed by Xavier de Lauzanne, as well as the previous rewards (poster, soundtrack and cotton bag).

You alone offer 25cm² of advertisement in the newspaper (the size of an ID picture) to "Les Pépites"!!! To thank you, we are going to mention your name at the bottom of the ad (if you're okay with it) + you will receive all the previous rewards

We thank you a thousand times ! You offer 50cm² in the newspaper to "Les Pépites" (the size of a credit card !). In addition to the previous rewards, you are invited to have dinner with the director Xavier de Lauzanne in Paris (transports non included).

10% of a newspaper's page ! You offer 100cm² to "Les Pépites"! In addition to the previous rewards, a private projection is organized for you and your friends (or your company) with the director Xavier de Lauzanne.