Magou's new album, a Senegalese musician with an unforgettable voice. 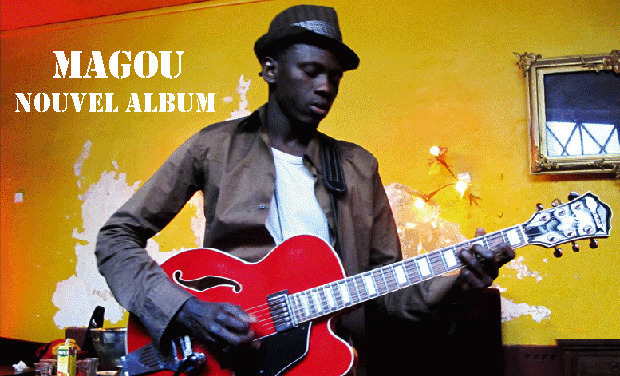 Once you hear the sound of his voice, you will not forget it. Magou delights us with his bass and soulful voice, and by a virtuoso playing on his acoustic guitar. In his songs, West African rhythms and traditional percussion meets jazz, soul and Afro-Cuban music. Magou is currently preparing his second album. He chose to produce it in an independent way, with the support of people touched by his music and wishing to hear more of it. If this album will be realised thanks to crowdfunding, a great adventure will begin and will soon be celebrated on a Parisian stage!

Magou was born in Senegal, in Ngor, a fishermen’s village at the western tip of Dakar, at the western tip of Africa. This is where the "Ndeup" is performed, a traditional "Lebu" rhythm which combines singing, dancing and drumming, and that can lead to mystical trance. In this musical and spiritual atmosphere, Magou developed his powerful husky voice and his guitar playing tinged with Mandingo tradition, Mbalax, as well as Blues and Folk music.

Magou is a song-writer and performer. For over ten years, he performed on stage with his band “The Dakar Transit”. Spotted by Network record company (Oumou Sangare, Desert Blues... ) he flew to Germany to record his first album "Africa Yewul" (Africa, wake up), released by Harmonia Mundi in 2006.

Magou’s second album will have traditional and mystic tones. His voice and acoustic guitar will guide us through an inner journey, musical and human. Magou’s lyrics deal with the destruction of the environment, the difficulties of professions linked to the land confronted to globalization, the richness of Africa’s soil and the poverty of its peoples, human relations and tolerance... Magou claims for lucidity, solidarity and harmony among people.

"Sama Aduna", live performance of the song, featuring in the film "Like a Lion".

The minimum target is the production of the album, in a digital version.

Once the album will be ready, it will be available in digital distribution.

If the crowdfunding exceeds the target, the additional amount will be invested in the album’s promotion, and if possible, it will help to organise a memorable concert and to release physical albums as well.