Some students of the Cahors music conservatory (France) want to gather the Mata Ganga Orchestra and organise a tour in France in February 2013 This band was born from their meeting in India in February 2012 with Indian young musicians studying in the C.J. Maa Music School in Rishikesh. In order to gather the orchestra and invite our Indian friends to perform in France, we need 10 return plane tickets Delhi-Paris. 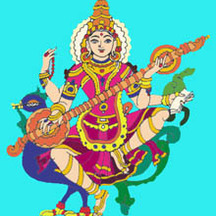 We met Swami Ma Chetan Jyoti in 2005. She had just founded a free music school for all the poor children of her neighbourhood.

The teacher, Shivananda a violinist and tablas player was gathering the pupils daily in a group, and thus got together a small orchestra. From time to time they played in concert in Rishikesh.

Ma passed away in 2008 and since then, despite the difficulties, Shivananda has kept on teaching voluntarily. Our association has been supporting him materially and psychologically.

The association regularily produces CDs which we sell in order to fund solidarity actions.

The first CD, "Chansons pour les enfants du monde" (sold out) helped an orphanage in Katmandu (Nepal). The second one, " Undaway"  allows us to fund some medical actions in Benares (Varanasi).

The recording of "Mata Ganga Ki Jai" in the Cahors auditorium, followed by the musical tale "Si loin le pays" inspired by the CD and played in June 2010 in Cahors, and the participation of renowned Benares violinist Sukhdev Prasad Mishra, all this gave an overview of the Indian music and culture to the young pupils of the Cahors music school.

Some of them wanted to deepen the experience by going to India to discover the country and its music. For a few years now we had been wishing to get the youngsters from Cahors and those from the C.J. Maa Music School to actually meet. Ma had also expressed this wish in 2007 when she visited the Cahors music school.

We thus organised a trip to Rishikesh during the February school holidays in 2012. Eight teenagers from 15 to 18 years old came along for the adventure. The orchestra "Le Mata Ganga Orchestra" was born from this encounter uniting two musical styles and cultures.

The band includes 5 Indian violins, 4 classical violins, 2 flutes, 2 guitars, one slide guitar, tablas and 4 singers. The violinist Sukhdev Prasad Mishra created compositions on number of ragas ("Indian scales"). He is both soloist and conductor of the orchestra.

The musical programme includes pieces specific to each cultures mixing compositions by Ravi Shankar, Vivaldi, Beethoven in which styles come together, meet and attempt to merge. In memory to the Beatles'stay in Rishikesh a small detour with contemporary pop takes us back to George Harrison and hippie years. Sukhdev's compositions enrich the programme, which will be refined further during the youngsters' stay in France. The band has already performed in Rishikesh and Varanasi where they played 3 public concerts an another one in a shelter for street children.

This unique experience also lead to the making of a documentary. A young video maker from Toulouse, Nahum Ingrand, came along with us to shoot a video, which he is currently editing. The documentary will be completed with the Indians' stay in France, and we intend to distribute and promote it in establishments working in fields related to music, the youth and alternative travel.

What happens next depends on you!

This musical and human experience deeply moved all the young musicians. Since then they are very much eager to meet next year to reform the band with the idea tit will be the young Indians' turn to discover France. This is why we are organising a tour with a few concerts in Cahors, Toulouse, near Paris and maybe in Lille, during the February/March school holiday in 2013.

The music school of Cahors is committed to lend its premises for rehearsals. The Indian youngsters will also benefit from a week of meetings with musicians and school teachers to learn about the traditional instruments of Western music.

If the parents of the French youngsters could afford plane tickets and pocket money for their stay in India (a lot cheaper than in France), it isn't the same for the Indians, who come from modest families. They have committed themselves to finance their passports and visas, which already represents a major effort; however there is no way that they can afford plane tickets. This is why we appeal to you kisskissbankers.

About the Mata Ganga Orchestra

The whole adventure of Mata Ganga Orchestra in India (long but moving!)

Article in the local newspaper in Varanasi (with translation in English)

Article in the local newspaper in Cahors (with translation in English)

Our collection will fund the plane tickets for our ten Indian friends, we need 5100 euros

If we exceed our target, the collected excess will be used to fund transport expenses during the tour, and to rend a bus for our journey so that we don't have to use private vehicles. Our association can fund the costs of organising concerts and publicity.

French families will host the Indians in their homes.

NB : Our association is of general interest, therefore donations qualify for tax cuts up to 66% of the deposit within 20% of taxable income. We issue a receipt cerfa 11 580 * 03.

A signed postcard from the orchestra sent from Rishikesh, with your name and "generous donor" written on the back + your name in the credits of the documentary + kiss kiss

Invitation to a concert nearest to your home + previous rewards

Travel accompaniment in India for 10 days for 2 people - Visit of the school in Rishikesh, Agra, Benares (please see the conditions in the "Travel accompanying" section on the association's website - dates to be confirmed together) + rewards 1 to 7

Travel accompaniment in India for 3 weeks for 2 people - The way of the Ganges of DevPrayag in the Bengal gulf, visit of the Rishikesh school, Agra, Dev Prayag, Haridwar, Allahabad, Benares, Calcuta, Sunderban (please see the conditions in the "Travel accompanying" section on the association's website - dates to be confirmed together) + rewards 1 to 7