Support this unique project, live the adventure and give artists the chance to give life to their performances ! 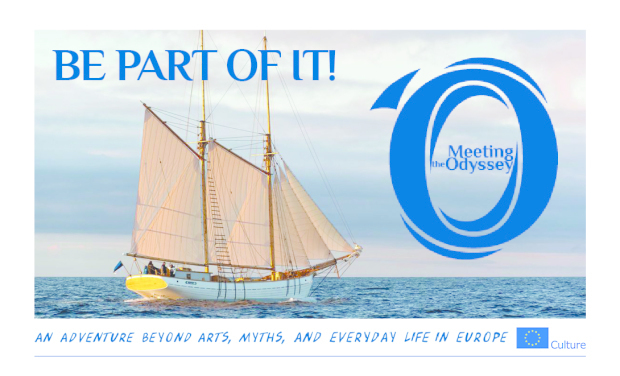 An ambitious project and yet so real, so powerful and most of all, a common dream to share.

This is the Meeting the Odyssey project, a journey back to the Mediterranean Sea. Artists, performances and participants from all over Europe: a mosaic of culture and art diversity that cannot be missed.

Meeting the Odyssey is an ambitious project created by European artists, with the help of European organizations in 2013. An original idea that took shape and sailed in a boat called Hoppet, from the Baltic to the Mediterranean Sea. This project, as it is inspired by the ancient text of Homer, initiates us to a modern Odyssey in terms of permanent source of inspiration for multiple performances and innovating approaches of art creations.

Each summer, since 2014, a group of passionate artists and project managers from different European countries travel together, built workshops and perform theatrical pieces in a great number of European harbors. Their goal? Intrigue the discussion on modern issues, such as immigration, social integration and European citizenship and identity, among others.

Meeting the Odyssey is a real chance to deal with contemporary questions and transform them into art performances. During this three-year journey, the Hoppet is a sailing scene of modern preoccupations, art innovations and most of all, a proposition of change for the contemporary conception of European culture.

Insatiable passion for discovering new cultures and powerful art creation for all citizens; those are the elements that give life to our project, our modern Odyssey. In summer 2015, this particular boat sails along the Italian and French coast. In summer 2016, it will be sailing in Greece.

This existing three-year journey ends in the Mediterranean Sea, in this very unique harbor of humanity. We invite you to be part of this adventure and lead this particular boat to its voyage back to Ithaca, just like Odysseus did.

As a symbol of European integration and creation, this project is partially financed by the European Union. Your support is also indispensable in order to fulfill its very last endeavor in Greece, in 2016. Help Odyssey to return to its mother country and allow this innovating performance to prove that Europe is, still, an insatiable source of modern expression in the world. This is not a request for financing yet another European project, your support is essential to close up an original endeavor conceived and realized by 14 partners with different nationality, culture, language and working methods. What actually unites them? A common dream and passion for creation over the borders. Embrace it. Support it.

What you are going to finance?

In 2016, Meeting the Odyssey will sail in the Ionian and Aegean sea, presenting a whole production of cultural events, performing at the ports of a number of Greek islands. Corfu, Ithaca, Rhodes, Leros, Icaria and Epidaurus.

This journey back to Greece can be fulfilled only with the passionate devotion of the artists' crew and the precious audience help. Our goal is €12,000 in order to finance a four month journey of international creations and synergy in the Greek islands. The money collected, will go on the technical support, artists' remuneration and transportation. Be the wind in Hoppet's sails, sponsor artists' proper residence and work conditions. Your contribution is the vehicle for the development of cultural patronage activity.