We honor the elderly with unique photographic portraits and interview documentary, capturing a fascinating local snapshot of history. 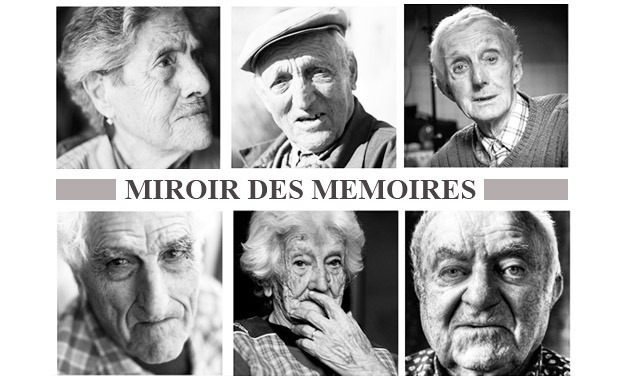 In a world where everything changes so quickly, where a new innovation is soon followed by another, there still lives a generation that grew up in remote rural areas, far from technology. Some of these elderly people lived in a scene frozen in time while others took the course of evolution with a little delay at their own pace. The testimony of passing time can be read in their faces, their wrinkles are whole chapters of life we can discover, and so are their stories.

Aim of the project :

To photograph and interview local "elders" of rural villages that have lived in the same region since birth. Each photographer visits 5 rural villages in the same region and contacts one of the oldest inhabitants. For each of their subjects, the photographer creates two photos: a portrait (rectangle, 30 x 30), and a photo in landscape format ( 30 x 45 ) where the subject is depicted in a setting of his/her choice. The photos can be in black and white or in colour.

Within this framework each photographer is free to use his/her own vision, technique and experience to allow the stories of a vanishing generation and culture to be told.

Each subject is additionally asked to provide one photo out of their personal photo collection that best represents their life and the following information:

- What is the farthest you have ever traveled?

- What technological innovation/arrival had the most impact in your life?

- What was your most memorable event during your life in your village?

- What is your recipe / secret to living a long and happy life?

- What was your preferred passtime in youth?

- What were the highlights of your youth (remember the parties, the laundry, the church, the place)?

- At what age did you start working and where?

- How did you get to know your husband (your wife)?

Originally from New Zealand and now based in New York and St Jean de Paracol Cherie Aarts Coley is a photographer and designer specialized in documentary photography and fine arts. She studied fine arts at the University of Auckland in New Zealand and has worked in the field of graphic design, interactive and interior design for 22 years, while following her passion for photography through a variety of projects. In 2013, she went to Turkana, a remote area of ​​Kenya, where she describes various charitable projects and created a series of portraits of people of Turkana. Since then, she has worked on a series of fine art images based on close-ups of nature, both with her camera and a digital microscope.

Attracted by early voyages , I make my first professional photographic experience in Guatemala, for a newspaper called "The free prensa ". After many wanderings , I decided to return to live in the Alps. I then specialized in photographing extreme sports. Collaboration with several agencies ggave me a broadcast in various media (Ski French Alps Magazine, Vertical, among others) For family reasons I settled down in Paris. As a photographer , I work for the city of Paris . I supported the event- coverage of the capital from 1986 to 1990. 17 years ago I moved iti Sotuhern France, the Aude. I regularly participate in cultural and tourist department illustrations, but I also cover other aspects of the photo like she studio work of all types. My latest book was out in 2011 published by " Arqa " and is entitled: Lights and Shadows of Rennes le Chateau .

Eager differences , I travel a part of the world for a number of years ... Needing to testify, the photo has become over the years a means for transmitting experience , emotions and if possible, information on the people encountered on their lifestyle, their claims, their fears and hopes. This earned me the 1st prize of Visa Off photojournalism ( photo report on the independence of Kosovo) in Perpignan in 2008 . Some publications in European magazines ( View Vi Men, the world of photography , Terre wine ) . Following report on the Burmese resistance I also participated in a TV news channel on TV5 . Two picture books have been published by Editions News Presses du Languedoc : " Carnival of Limoux " and " Dusk Cathar " prefaced by Henri Gougaud .   I also participated in advertising campaigns for the cooperative Sieur d'Arques ( Limoux ) / vineyard JL Denois ( Roquetaillade ) / vineyard Collovray ( Antugnac ) / Vintage Union ( Limoux ) .

Of Creative Nature and having a pronounced aesthetic sense, I have discovered an early passion for photography - mirror of a different look. Capturing a landscape, captureing color and light - a state of speed and accuracy.   I worked as a journalist for a newspaper in my east German hometown Karl Marx Stadt and as a photographer for various magazines. I specialize in documentary features , such as for the construction and renovation of the boat "large barge " and " Verda " in Brighton , UK, documentation of an agro / eco tourism project " Cosmopolitana " in Restrepo , Meta, Colombia where I was working in creative advertising . Her latest creations were a photographic reportage ( in 4 languages ​​) on the tribal life in Huitoto Araracuara , Colombia and the project " Transformation" - 12 months in an organic wheat farm- a photographic reflection of an agricultural cycle from the first turning of the soil to bread fresh out of the oven.   She studied psychology , journalism and dances Tango Argentino with a lot of passion.

This unique documentary adventure requires a big investment both on a personal and financial level.  We have the motivation to generate the energy required to achieve this adventure but beyond this we will need your support.

to: finance the printing of canvas with the portraits for the exhibition, a book and a website.

Our photographic and editorial work will be presented through a touring exhibition through the department of Aude, in Languedoc-Roussillon, in the south of France.  We plan to organize at least five exhibitions throughout the region.

The first show is scheduled for May, as part of the festival, "Artists a suivre" in Campagne sur Aude.

We want to memorialize the exhibition with a short-run photo book and develop a website documenting the project with images and sound. This is remarkable documentary footage.