Recreating in 16mm fujifilm the passage through the looking glass as seen in Mr. Nobody. 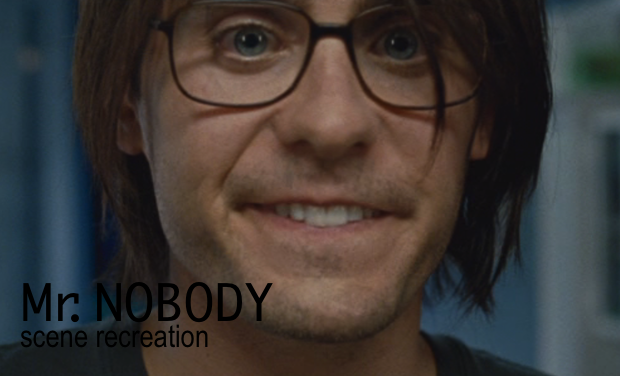 We are trying to recreate a scene from Mr. Nobody, directed by Jaco Van Dormael, in 16mm film stock for a cinematography course in Brooklyn College. This sequence is incredible as it contains one of the most advanced effects in cinema history, yet it is barely noticeable.

Nemo wakes up with Elise at his side and then goes to the bathroom. There’s nothing very complex about that, but the camera movements in this scene are amazing and the most cinematographically inventive ever seen. We literally dive through the mirror as this scene unfolds in the very beginning of the film.

Recreating it in 16mm footage is sure to give it a very special look that will benefit the scene greatly.

Morgann is a French filmmaker who has done 17 short-films in the last five years. He has been playing with a 16mm Bolex since he was 6 years old and he's eager to recreate the scene from one of his favorite movies.

Natalie has just finished her first 16mm short-film as a director and she is happily assuming the role of cinematographer as well as producer on this adventure.

Jake has also finished a 16mm short-film and he is an important and valuable asset, both as script supervisor and builder on the set.

Keith has valuable insight on building a set. He also has done a marvelous job being assistant camera on Bolex for two previous shoots.

The voice of reason with an iron will, Rhodesia is a talented and committed assistant director.

Bendor’s valuable qualities help us get through the day both on set and off set.

Only those who have contributed to the making of this movie (either financially or technically)  will be able to see the finished product.

We are building the set right now and we're looking for $1000 to finish it. On top of that we are working with the 16mm Fujifilm stock which is expensive to process and digitalize.

Reasons to donate: If you love Mr. Nobody as much as we do and if you're curious about the results of the experiments; If you want to help young filmmakers in need of money – but more than that, in need of an audience and partners. If you want to see the last Fujifilm rolls ever produced used wisely.

Sent to your email: a photo of the entire crew saying thank you.

A bunch of photos of us working on set and on preproduction sent to your email. And the private link to see the result.

Your name on the credits, the private link to see the scene, and the series of still pictures sent by email.

A dvd of the scene, a dvd with four of the director's short-films, a strip of original negative film, your name in the credits, and the photos sent by email.

A blu-ray with the scene, the digitalized footage and five of the director's short-films. One strip of original negative film. Your name in the credits. A series of photos sent by email.

The special 'The End of The World' necktie designed by Charlie Balthazar (see picture). A blu-ray of Mr. Nobody. A blu-ray of the scene, the digitalized footage, and six to seven of the director's short-films. A strip of original film negative. Your name in the credits. A series of photos sent by email.