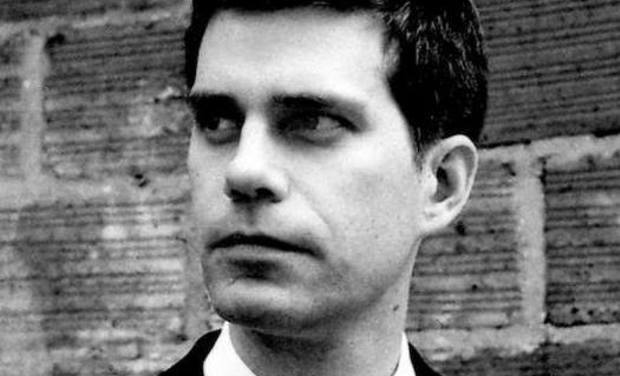 Samuel Andreyev has been working with our ensemble since its inception. He was the first composer to dedicate a piece to us—a duo, which we have explored in all its facets. This led to our commissioning a new work from him for four instruments.

With these two pieces as a starting point, we have spent part of the past few years exploring his work; recording a CD of his highly colourful songs; working on new timbral possibilities; and testing the limits of our ensemble.

His music interests us because of his refined writing, as well as his furious curiosity for instruments that are unusual or that must be created especially for the project. Like the sketchbooks he fills with minute notations, Samuel’s work is refined and varied. Achieving a rare balance between the rhythmic, harmonic, melodic and timbral lines, it is utterly without comprise except when instrumental or physiological limits impose it.

Our ensemble assumes the rôle of explorer of the vitality of contemporary creation, but our mission is also to bring pieces to life beyond their premieres, by exploring works that are aesthetically close, as well as other works by the same composer. Beyond our work in the domain of musical creation, we are always looking for ways to have these pieces exist and to be developed over time, well beyond the initial phase of sketching.

These pieces have had, and will continue to have a life on stage, but are now mature enough to be recorded for an album. Throughout this project we have sought to provide the conditions for each work to exist in its own studio version: taking the time to find just the right sonic colour for every piece, and do justice not only to the musical thought and poetic universe of the composer but also to the best of our performers’ energy. To prepare the project the pieces will be performed in several concerts and will be taken on an international tour upon the album’s release." HANATSUmiroir

"My music has the somewhat annoying quality of being extremely difficult to play, but not quite impossible. Performers quickly realise that everything in my scores demands careful attention, and that the music works best when performed with both intense energy and attention to detail. It presents any number of logistical challenges. Musicians must play on unusual instruments, some of which are extremely rare and must be located, others of which have to be specially constructed. Rhythms are usually pulsed and precise, but constantly shift. The harmony is often microtonal, so that much time must be spent perfecting intonation.

The result is that my pieces work best when slowly worked upon by the same performers over spans of several years. At the outset of my career, when I was completely unknown, it was very difficult to meet these conditions, but I refused to compromise my artistic vision. I am therefore thrilled to work with HANATSU Miroir, which in every respect has proven to be an ideal collaborative partner. These performers are as obsessive as I am. Perhaps even more. I know it, since I’ve had the opportunity to perform with them, as an oboist. There have been times when, at the end of a long day of rehearsal, I was tempted to say, ‘fine, it’s good enough–let’s stop for now!’ — only to be ignored, the performers still not satisfied, unable to let it go until perfection has been not just fleetingly glimpsed but permanently acquired. This album, unusually for a disc of contemporary music, is the fruit of a very lengthy collaboration in which some of the pieces have been in the ensemble’s repertoire for a decade or more. I can unreservedly say that it arises out of the best possible conditions. I hope you’ll come along on this adventure with us." Samuel Andreyev

Samuel Andreyev is the composer. He was born in Kincardine, Canada, and settled in France in 2003. He studied in Toronto and Paris. Immersed in abstraction, both poetic and pictorial, he is the author of several volumes of poetry, of a catalogue of songs, and of about 25 scores ranging from solo to vocal to orchestral works. The works on this CD are written for varied instrumentations, from a solo clarinet piece up to small ensembles with conductor.

Ayako Okubo est the flutist and co-founder of HANATSU miroir. She grew up in Japan but arrived very early in Europe to pursue flute studies. Following studies in The Hague, and Amsterdam, she arrived in Strasbourg where she became particularly interested in contemporary music. She founded the ensemble in 2010 with Olivier Maurel. A free agent in the contemporary flute world, she has developed an instrumentarium that is unique to her, ranging from the piccolo to the contrabass flute.

Olivier Maurel is the ensemble’s percussionist and co-founder. Next to Ayako Okubo, he is in charge of the artistic direction of HANATSUmiroir and has contributed to the world of contemporary percussion through his varied activities. Eclectic and creative, he seeks to build bridges between composers, aesthetics and their audiences. Trained in Rennes and then in St. Malo, he pursued high-level studies at the Strasbourg conservatory and joined several ensembles in that city (Linea, Percussions de Strasbourg, l’Imaginaire) as well as groups such as Ork, and Pierre Moerlen’s Gong Tribute.

Thomas Monod, clarinetist, studied in Colmar, Strasbourg and Bern and is specialized in the contemporary music repertoire. With his particular sound, his facility with extreme dynamics, his capacity to switch rapidly from one clarinet to another (even if he grumbles about it), an uncommon sense of phrasing, make him the ideal clarinetist for Samuel’s music.

Elsa Dorbath studied in Strasbourg, Paris and finally Lausanne, where she now lives. Also specialised in contemporary music, she plays with several Swiss ensembles such as Contrechamps or the Orion Duo. She plays with great precision, energy and musicality, and is a valuable ally for this vivid and highly specific repertoire.

Stéphane Clor is a phenomenon. Sound plastician, generous improvisor, musician with a very special sensibility, he brings to each piece his particular incisive way of playing, and the originality of his artistic path. A member of the ensemble, he is joining us for the piece Music With No Edges.

Laurent Camatte is a violist who lives dangerously. A musician engaged in contemporary creation since the 1990s, he has worked with many of the ensembles and composers who have brought French contemporary music into being since the end of the 20th century. Trained in Marseille and in Paris, he joins us for the quintet, Music With No Edges.

Trami Nguyen is a pianist, but also a multidisciplinary artist. Her path is that of an artist who is curious about many things and active across multiple domains. From electronic composition to interpretation, several piano works have been dedicated to her. She joins us for Vérifications, playing a Casio mini keyboard through a large Bassman amplifier.

Rémi Durupt is a percussionist. Following studies in Strasbourg, Geneva and Paris, he has since pursued high-level conducting studies. Founder of Ensemble Links, fascinated by improvisation, and passionate teacher, he is also one of the finest contemporary vibraphonists and a musician engaged in contemporary creation. He plays the second vibraphone part on Stopping and percussion on Vérifications.

Through participating in this project, you are not only supporting the creation of an album: you are also providing the possibility for a composer and an ensemble to concretise these engagements, you contribute to the continuing evolution of our mutual process of creation and to turning projets into reality. You are also helping Samuel’s music, as well as our interpretations, to achieve a wider dissemination.

Through your support, you are helping to construct a new economy of artistic maturation. The idea is to consider the recording as the endpoint of several live interpretations, to result in studio versions that are as close as possible to the energy of a live concert, but with the microscopic precision of the studio and all the possibilities offered by mixing.

Finally, your support will help provide the conditions that allow artists to devote the necessary time to a high-level interpretation of these works and to play them again, and again, outside of the studio.

Concretely, the campaign will serve to pay for the mixing of the CD

If we succeed in going beyond €4,000—which we hope will happen—we will be able to hire a press secretary, who will be in charge of the album’s promotion in France. The average cost for this work is about €1,500.

If we are able to go even higher, we could even self-produce a concert to celebrate the launch of the album in Paris or in Strasbourg, featuring all the musicians who have participated in the project. For now, the launch concert is planned for Strasbourg, in a quartet formation.

The association HANATSUmiroir will receive the entirety of the raised funds.

The broad outlines of our production calendar:

September: promotion copies sent out to the press

October: Release of the album

A physical copy of Music With No Edges

The album in its physical incarnation, with just under the maximum amount of music it is possible to put on a CD. We’ve recorded almost too much music for this project!

A physical copy + videos of 5 Pieces for flute and percussion

A physical copy of Music With No Edges, plus a free download of an HD video of Five Pieces for flute and percussion. This was the first piece we worked on together with Samuel Andreyev, and we made a special video recording of the piece in the architectural masterpiece, l’Aubette of Hans Jean Arp and Sophie Taeuber in Strasbourg.

…And another CD of Samuel Andreyev

You receive all of the above, plus Samuel Album’s album of songs, The Tubular West, recorded with the participation of Olivier Maurel and Ayako Okubo

+ plus a DVD of Lost in Feedback

All of the above, plus a DVD of Lost in Feedback by Maurilio Cacciatore, which HANATSU miroir produced in 2015

Your name in the CD booklet

All of the above, plus your name in the CD booklet

Come hear us perform or rehearse, spend some time together

It would be difficult to offer you more than this: all of the above, plus a manuscript score page of Samuel Andreyev. You are also invited to attend a mixing session, a general rehearsal, a studio recording session or a concert.