'My Life in the Bush of Ghosts' (working title)

Support this co-creation project based in Brussels: with 6 Artists, 3 disciplines, and 2 curators!

'My Life in the Bush of Ghosts' (working title)

Hi there! We are Isabelle & Charlotte, and very happy to present our artistic project My Life in the Bush of Ghosts (working title)! One year ago, the idea to start a co-creation popped up in the coffeebar Mug nearby Bozar in Brussels. It became the seed of a now growing project with six artist!

My Life in the Bush of Ghosts, What’s about?

My Life in the Bush of Ghosts (working title) is a twofold project whereby we combine dramaturgical research and the practical co-creation. The project consists of a co-creative research project in which 2 curators and 6 artists with different disciplinary backgrounds collaborate on the theme technology and fragility for 3 weeks. From a shared fascination for the impact of multimedia communication technology tools on our individual and collective way of living, we are looking for connection points in our own practice in order to create collectively a full multimedia installation performance.

Where will it take place?

Both the research and the installation show take place in the Begijnhofkerk next to the Fish Market in Brussels. This busy site will play an important role for the performance in terms of content and diversity. Afterwards, the presentation will lead its own life by further spreading, whereby the sensitivity of this great site stays an important part for the performance.

How do we define the co-creation project?

Our interest in this way of co-creation is also double. It enables participants to explore their own practices as a mutual source of inspiration and it invites the team to a different way of creation than the current individual way of working. We are convinced that this co-creative, transdisciplinary and site-specific way of working will lead to a new creative format that will bring an opportunity to new public awareness and an innovative way to interpret our thematic content.

Who’s involved in the project?

Isabelle and Charlotte are the initiators of this project and will act as curator / dramaturg both content and practical development. In view of their first performance, they are accompanied by Marnix Rummens, a curator / dramaturg with a strong transdisciplinary background. Néstor Garcia Diaz and Rodrigo Sobarzo are performers with a background in dance. Laura Eva Meuris and Pawel Wieslaw Duduś have been dancing together for some time, bringing out their own creations. Pieter Steyaert is a visual artist with a strong focus on computational methos and Luiza Schulz is active as a sound designer. Viktor Van den Braembussche is our great graphic designer of the whole project!

Although every artist of the team is specialized in its own artistic field, the main focus is to create together a performance wherein the several disciplines of the artists are combined with each other.

Our partners in crime!

During our search for productive and financial support we joined Marnix Rummens, who took over the general and artistic leadership of workspacebrussels. Today, he works as the artistic coordinator in BUDA, based in Kortrijk. During our first conversation, many aspects of the project were discussed in detail. Most of all, we talked about the content of the artistic concept and about the artists who were currently involved in the project. Concretely, workspacebrussels provides technical support, communication support and a financial contribution.

Viktor Van den Braembussche (°1994) is our graphic designer who makes our cards and poster. He has a strong focus on printed matter, book design and working in the cultural field. He graduated in 2016 in the academic course of graphic design at LUCA School of Arts campus Sint-Lucas Ghent with a magazine around Jean Baudrillard’s theory of the Simulacrum and the interplay between reality and fiction. Since then he has worked on several projects including artbooks, smaller printed matter and online matter and exhibition design. Clients and collaborators include MER. paper kunsthalle, S.M.A.K. Ghent, LUCA School of Arts and Grafische Cel Ghent.

A sneak peek of our Workshop!

Because our project is also based on research, we organized a workshop with dramaturge Kristof van Baarle, who is related to ‘A two Dogs Company’, the theatre group of artist Kris Verdonck. Kristof writes his phd ‘Towards a Critical Posthuman Aesthetic: A Performance-Philosophical Research into the Configuration of Posthuman Figures on the Contemporary Stage of Kris Verdonck’ at the University of Gent. The starting point for the workshop was the essay 'On the Apparatus' of philosopher Giorgio Agamben and other scholars who are participating in the debate around fragility and technology on or off the stage. This meant a big inspiration source for the further development of our dramaturgical research for the multimedia installation performance. We opened up an online discussion platform where we share our ideas about related topics. During this work in progress, the artistic motives of the creation become more concrete.

Isabelle Vander Stockt began her studies in Art History and Archaeology with a minor in Philosophy at the Vrije Universiteit Brussel in 2012. She will round up her studies at the end of the academic year of 2016-2017. With a view to finishing her bachelor’s degree, she is writing her thesis on ‘Integration of the current ecological concerns by contemporary artists’. Isabelle worked as an intern assistant curator at the exhibition Forme e Antiforme (2015) in Milan, curated by Hans De Wolf. She got the opportunity to continue this experience as an assistant curator for the exhibition Xu Bing. Worlds of Words / Goods of Gods (2016), also in Milan. Other relevant internships –experiences are: production for Export/import Festival at BRONKS (2016), production for L’étude (nu slaat de chaos toe), a new upcoming theatre production of Sien Eggers, Sofie Palmers and Jessa Wildemeersch (2017). From June untill September 2017, Isabelle did an internship for the general production and the production of the performances of the TheaterFestival, based in Brussels. Nowadays, she works for Argos, where she is incorporated by the reception and distribution of the artworks.

Charlotte Vandijck graduated as a master in Art History with a specialisation in Theatre Studies, a major in the performing arts and media art, and a minor in Literature at UGent (2015). During her bachelor’s she studied as an Erasmus student at the Université Paris X Nanterre. She also worked in Berlin as an intern communication and production for Perhaps all the Dragons (2014), and co-developed the dramaturgical concept for their upcoming production Lisboa. Charlotte is currently finishing a master’s in Cultural Studies at KU Leuven. On top of that, she worked as an intern at KVS where she did the communication for Work In Progress (2016). Subsequently, she worked as a dramaturgical assistant for the production SLOW#01(2016). Charlotte also collaborated on two opera productions at Opera Vlaanderen. She composed the program of the opera Simon Boccanegra (2017) and is currently active as assistant production dramaturgy for the new creation Sadko (2017). From July untill September she did an internship for production of the contextprogramme of the TheaterFestival based in Brussels.

Néstor García Díaz (1985) was born in Alicante, Spain. After studying dance at the Conservatory of contemporary dance in Valencia, he moved to Barcelona to pursue theatre studies at the Institut del Teatre. Three years after, he moved to Belgium. There he ended up graduating at P.A.R.T.S (Performing Arts Research and Training Studios) in 2012, school directed by Anne Teresa De Keersmaeker.

Laura Eva Meuris studied at the Royal Ballet School Antwerp (2001-2006) and the Dance Academy CODARTS in Rotterdam (2008-2010). After her graduation, she started a part-time education in painting at the Academy of Sint-Lukas and studied Philosophy at Thomas More – Campus De Ham. Since 2007, Laura is active as a performer and dancer.

Pawel Wieslaw Duduś was born in Poland in 1989, but is based in Austria since 2008. He graduated at Anton Bruckner University in Linz with a Master degree. During his studies, he participated in several projects for Cie.Off Verticality directed by Rose Breuss. Before and after his graduation he has taken part in diverse projects; Several collaborations with international choreographers have influenced his artistic development.

Rodrigo Sobarzo de Larraechea has Chilean and Dutch roots. He studied choreography at the SNDO in Amsterdam, and theatre at Universidad de Chile in Santiago. He was a recipient of the DanceWeb scholarship in Vienna in 2009. He has worked on his own interdisciplinary creations ever since.

Luiza Schulz, a Brazilian composer and sound artist with German roots was born in Rio de Janeiro in 1989. Parallel to initial studies in environmental engineering she took classes in philosophy, fine arts and composition to finally, during an academic exchange in Berlin, bridge over to sound studies as a visiting student at the UdK. She is currently studying composition, computer music and experimental media at the Anton Bruckner University Linz after finishing a research period at the Institute for Electroacoustic Music (ELAk) University for Music and Performing Arts Vienna.

Luiza researches and performs sound in its manyfold relationships to other arts in various contexts. Her work, solo or in co-operation with others, has been performed at numerous venues and festivals, e.g. the Echoraum Wien, Ars Eletronica Festival and the Brazilian Museum of Sculpture, São Paulo.

Pieter Steyaert (1990) is an artist who uses advanced computational methods to create interactive artworks and performances. He graduated in Visual Arts at Sint-Lucas Gent. Then, he specialised in design computing at the University of Sydneyy (Australia). After that, he studied computer sciences at the Vrije Universiteit Brussel. In 2013 he co-founded the collective Dorids, together with Lucas Caesens with whom he has a shared passion for interactivity, art, design and code. Since 2009 he works within the live visuals, but away from linear practices for the benefit of the majority.

Currently the budget of our production is:

- We received a financial support of 3,000 euro from workspacebrussels

- We have requested 3,000 euro for subsidy at the Vlaamse Gemeenschapscommissie

The amount we wish to receive through Kisskissbankbank is 2,000 euro. The amount we collect through the crowdfunding will go to the artists fees and artistic/productional material.

Visualization of the costs and incomes of the production: 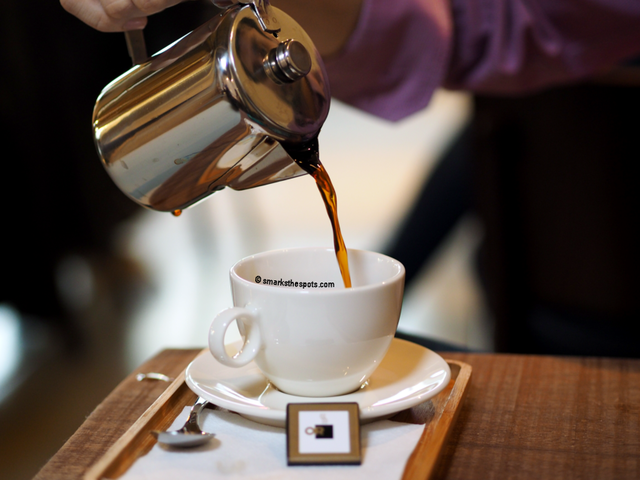 In the OR Coffee, professional baristas make you feel at home in their 4 coffee bars. For this reward you can visit the OR Coffee bar in Brussels (Rue A. Ortsstraat 9) nearby the Beursschouwburg. Enjoy your coffee of the moment or make your choice in their selection loose-leaf tea, homemade sodas, cakes and pastries, breakfast or light lunch suggestions! With a voucher to the valuation of 10 euros, you have many choices to pick anything on the menu for yourself, or for your OR Coffee date!