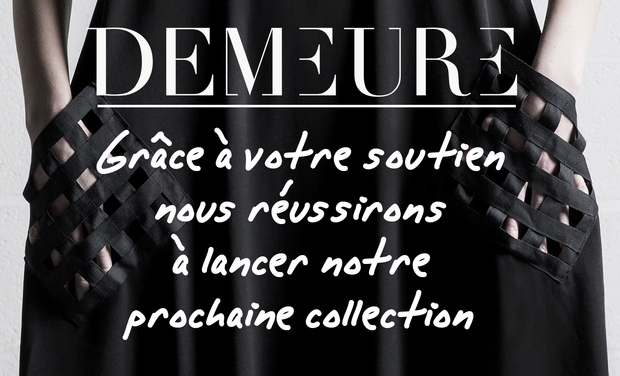 Demeure is a young avant-garde French label based in Roubaix and supported by the association Maisons de Mode. Its founder: Charlotte Cazal.

As an artist, she first she created exhibitions and performances, covered by the press, then in 2013, she invented a new project in Berlin. A brand named "Demeure".

Her concept is based on a mix between art and fashion. In Autumn 2013 she launched her first collection: "Racine" ("Root").  Shortly after she joined Maisons de Mode, who support young creators, and won the Grand Prix Maisons de Mode the same year. The brand has also been supported by local partners as Initiative Lille Métropole Nord, BGE, FCE.

Contemporary art, literature, photography.... All the collections are created in collaboration with a renowned artist: Charley Case, Maria do mar Rêgo, Marion Catusse, Cécile Carrière, Rik Smits. The artists are invited to collaborate in the creation of the collections and to participate in events organised by Demeure.

Aiming to be an active and ambitious designer label, Demeure showed its collection  on French and Italian catwalks, and participated in Paris and Amsterdam Fashion Weeks.

The SS15 collection was presented during the "Moda Fashion Contest" Fashion Show in Italy and during the Printemps Lille department store Fashion Show. It has also been sold to the Museum La Piscine. Since then, Demeure's image has grown, the label has specified its style and its network has expanded.

Preview "Blue Stone, She Is A Queen" AW15 collection

Today  Demeure wants to develop internationally, which is a crucial step for the brand to grow. The last collection, " Blue Stone, She Is A Queen ", with invited artist Myriam Mechita, was presented during the Fashion Week within "Paris Sur Mode" tradeshow, It has received a very good welcome in France, the USA and Dubai and will soon be sold at a new point of sale in New York.

We need the KissBankers to support us so that we can create our next collection and expand our reach.

The funding will allows us to create the prototypes, then a photo shoot of the collection in order to present it internationally.

Thank you all for your support.