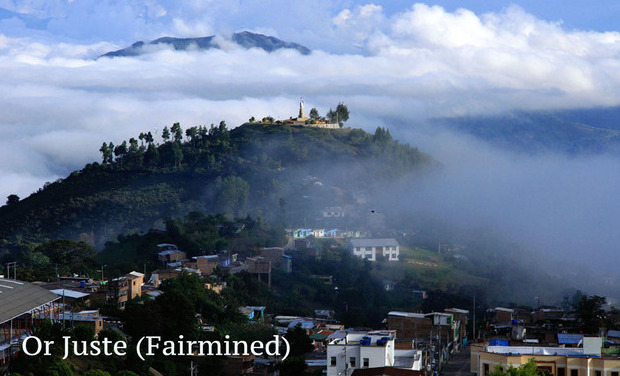 In the Andes mountains of South West Colombia, the remote village of La Llanada has subsisted for over 100 years by mining gold through a unique and ecological approach. These artisanal miners are proud of what they do and the elements of their craftsmanship and their respect for the environment is handed down from generation to generation. With the support of a local NGO and a Swiss jewellery company they are currently working towards obtaining the Fairmined or Ethical Gold certification.

In gold-mining, the villagers have found an alternative to growing coca. But in a difficult and fragile political context, where gold is highly sought after by multinationals and local armed groups, the villagers of La Llanada face precarious times.

This film will document La Llanada's ecological approach to mining gold, and will explore the chain of production by following the daily life of Rosa Maria a single mother who has had to endure many difficulties in supporting her family.

The documentary will highlight the impact that the groundbreaking initiative of Fairmined certification has in enabling miners to improve their living standards, and by giving assurance and raising awareness amongst consumers about responsibly mined gold.

I fell in love with Colombia. Generally the country is depicted as a land of violence and drugs trafficking. I want to create a visual poem orchestrated by the clouds forest of the evergreen mountain and courageous life of its inhabitants.

We will film in Colombia in December and after in Europe (Paris and Luxembourg) to follow the gold from earth (extraction), the refining process in Paris and to the jewellery making in Luxembourg.

I work with a production company (http://www.theirisgroup.eu/) and we have a public fund but we need this collection to complete the post-production.

The money will be used for the post-production, 20% of the fund for editing and 80% for sound mixing and visual effect.

Images of the village and protagoniste