Paran Latan, production of the 1st album in Vanuatu with 100% female musicians 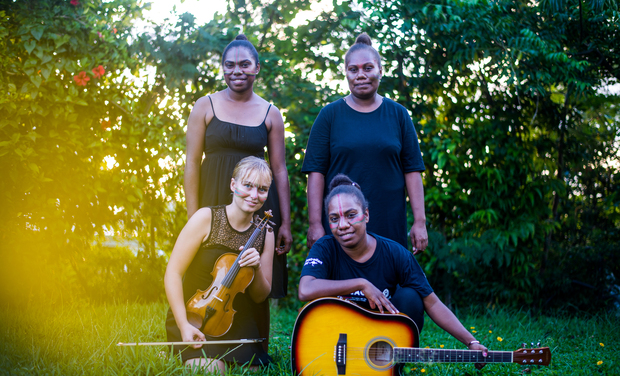 Paran Latan, production of the 1st album in Vanuatu with 100% female musicians

Founded in 2018, Paran Latan, which means "Tanna Women" in one Language of West Tanna (Natr), is a music band from Vanuatu composed of female singers and musicians. It comes from the meeting between the voice of Joan from Tanna, an island located in southern Vanuatu, and the violin of Noémie from France. Rosanne, Joan's little sister, lulled by her sister's songs for years and Rachel, mesmerized by the band's first performance, joined and expanded Paran Latan. The music of Paran Latan is intended to reflect the diversity of cultures, the diversity of customs and external influences that all together do the richness of Vanuatu. The songs, composed by Joan, mix the fascinating melodies of Tanna, the custom rhythms, the sounds of folk, which are highlighted by the magic and powerful voice of Joan. The lyrics of the songs are sometimes written in one or more languages ​​of Tanna, sometimes in French or in English.

Through the songs and the music, Paran Latan sends a message to all the voices of Pacific women and all their talents which are sleeping to wake up and rise.

Releasing an album would be such a good thing to make people hear this message !

This project will fund the costs of the production of the album : Recording, Mixing, Mastering, Maintenance of the instruments, Transport of the musicians, Rehearsals, Marketing, Distribution, Advertising