PLUME - Escaping the Dark Side

Support the release of "Escaping the Dark Side", the very first album by alto saxophonist Plume, featuring Ambrose Akinmusire. 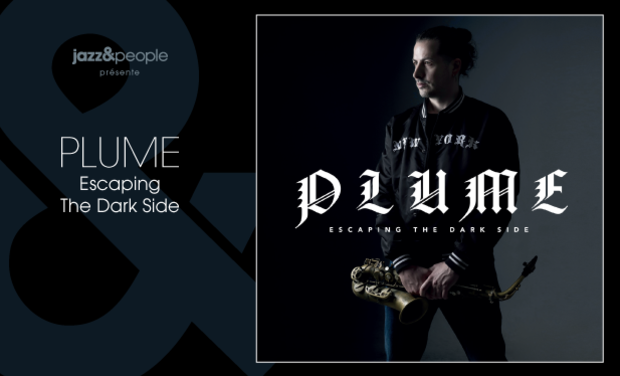 PLUME - Escaping the Dark Side

After Boston and New York, the saxophonist known as "PLUME" has arrived on the French scene with astonishing energy and an alto sound that is sweeping everyone off their feet. This atypical and distinctive “bird” has made an intense and spiritual album that brings the mystique back to the very heart of jazz. With special guest Ambrose Akinmusire. Warning: revelation!

When was the last time you heard something like this?  When was the last time hearing an alto saxophone felt like a punch in the gut? If PLUME (“feather” in French) seems to come out of nowhere, there is no question about his talent. He makes a mark on everyone who hears him for the first time. Catches the attention of musicians who hadn’t heard of him. Impresses all those who share a stage with him. Captivates with a few notes those who hear him for the first time. In just a few months in Paris, this atypical saxophonist and his unusual nickname have become the talk of the town.

Where does he come from? PLUME didn’t try to seek fame before. Under this gentle and mysterious, birdlike and airy nickname, he was active in France and in the United States, living between New York and Paris, where he has now settled. A graduate of the Berklee College of Music and New England Conservatory in Boston, he rubbed shoulders there and later on stage at the fabled Wally’s Cafe with an entire generation of musicians: Christian Scott, Walter Smith III (author of the foreword of the album), Ambrose Akinmusire (featured on two tracks), Jason Palmer, Warren Wolf, Jaleel Shaw… All of whom speak highly of him and who are leading lights of jazz today. If all his former classmates have become key figures of contemporary jazz, PLUME has followed a more tortuous path, preferring the underground to glory, traveling back and forth across the Atlantic, and spending most of his time perfecting his musical craft, his technique and concepts.

PLUME is a shadowy presence in a city. His instrument slung over his shoulder, he is a samurai of the saxophone for whom the repetition of gestures is a kind of plenitude, for whom the articulation of a phrase must attain a kind of evidence, for whom the deployment of sound is a way of getting in touch with a spiritual resonance. PLUME chose jazz the way one enters into religion. Music is for him neither a pretext nor an artifice. It is a quest. An obsession. And it is perhaps a salvation.

PLUME reconnects with the fiercelessness of jazz that drives musicians to surpass themselves. His playing is inhabited by an unfeigned urgency. No demonstrations, no stylistic exercises. He plays like the person he is, with determination and concentration. Leading a close-knit quartet, he seeks the light; not in order to shine but in order to breathe.

PLUME brings the mystique back to the very heart of jazz.

All compositions by Plume, except #3 (by Eden Ahbez, arranged by Plume) and #7 (traditional).

The album has been recorded, mixed and mastered. Only one step remains in order for it to see the light of day. For that, we need your support.

Launched by the journalist and curator Vincent Bessières, jazz&people is a breeding-ground label that welcomes projects from creative musicians and helps them come to fruition through crowdfunding. It mobilizes music lovers through a responsible approach that gives precedence to the direct relationship between the artists and those who listen to them. This is the reason we are asking you for your generous financial support.

- the SDRM (mechanical rights of authors, composers and editors) : 800 €

- those who contributed to the design of the album (graphic designer, translator, photographer) : 1200 €

The monies collected for sales of the album by jazz&people will be given 100% to PLUME's project (other than the commissions taken by the crowdfunding platform).

If the campaign is a success, the album will be released early April 2019.

The participants will receive their rewards in the days preceding the release, discovering the album avant-première!

following the fundraising, we have more than the necessary amount? Then we will have more resources to promote this music and to make it visible.

And if we don’t reach our goal? Then the project collapses!

And with the development of the music offered on streaming sites (from which musicians make almost no money), not many people feel like paying for music anymore. By giving your support now you are making a militant act, because you allow this album to come to light without making the artists take risks, as they have already invested a lot of time and money. If this crowdfunding project reaches its goal, you will get other benefits in addition to receiving the album before its release date.

The artists need you. But we need artists even more.

Thanks in advance for your generosity and your support.

A signed CD copy of the album, delivered to you before its official release

Full download of the album before its official release, and all our thanks!

A CD copy of the album, including a 8-page booklet with liner notes by saxophonist Walter Smith III, before the official release

CD+HD Bundle | a signed copy of the CD edition + a complete 24-bit mastered High-Rez download of the album.

'Bootleg' Bundle | a signed copy of the new CD + a complete 24-bit mastered High-Rez download of the album + an unreleased live recording of Plume's performance.

Lulu White Bundle | a signed copy of the new CD + a complete 24-bit mastered High-Rez download of the album + come and sip a free cocktail at Lulu White's (Paris Pigalle) while listening to Plume and his band live, and meet the artists.

Live Bundle | a signed CD copy of the new album + a High-Res download of the album + a free ticket to the release concert at Duc des Lombards jazz club (Paris) on May, 19th 2019.

Lesson Bundle | a signed CD copy of the new album + a High-Res download of the album + a music lesson with Plume about saxophone, improvisation, composing... (1 hour-long)

5 Lesson Bundle | a signed CD copy of the new album + a High-Res download of the album + 5 music lessons with Plume about saxophone, improvisation, composing... (1 hour-long x 5)

Private Concert Bundle | a signed CD copy of the new album + a High-Res download of the album + a private concert of PLUME and his trio (transportation and housing not included outside of Paris and its region).