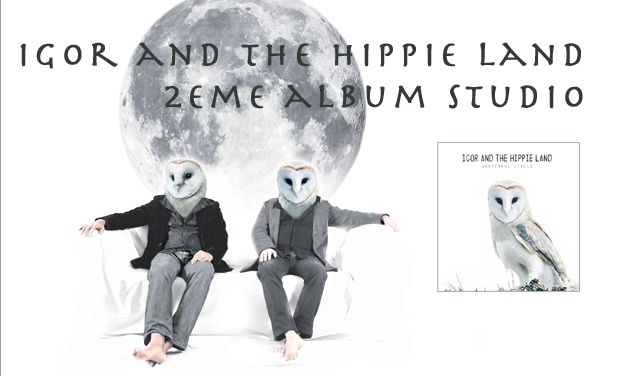 Participate now and help us make it happen! Thank you!'

The start of 2016 saw our band members Igor Stanislas, Manu MacManus and lyricist Claire Gristwood back at the studio continuing work on a new album, accompanied by drummer-percussionists Alain Bidotnaude "The Greez" and Philippe Jeoffroy, and by Philippe Henner on bass - several tracks already complete and mastered in the UK by Pete Maher.

This new album is to include seven indie, sometimes progressive, rock tracks recorded at Studio Poptones in Paris with J-C Versari and in the south of France and mixed by Kutch at Quicksilver in St Jean de Luz - two of which, further to the conscious decision to go beyond more traditional track-length barriers, are more instrumental and cinematic.

The next steps will be to get to work with a sound engineer on mixing these two longer tracks, to master four, then find a way of exempting ourselves from the irritating additional SDRM fee charged in France for pressing records!

And so we turn to you and your passion for music in the hope of your financial support.....

For your interest here are one or two extracts:

THE MAN WITH NO NAME

SUNSHINE IS RISING ON YOU

With an obvious nostalgia for vinyl plus a firm belief in its sustainability and incomparable sound transmission quality, our plan is for the album to be released on vinyl with a digital download coupon.

We've so far been lucky enough to have had the invaluable help of a number of artist/photographer/designer volunteers but it's a tall order trying to achieve one's goals relying solely on people being available and willing to help without being paid.  So here we are, giving things a try with Kiss Kiss Bank Bank and hoping for your support.

Any funding will allow us to go ahead with the following towards the completion of the new album :

-  the mixing of remaining two tracks plus mastering - July/August 2016

The new album 'Wonderful Circle' on vinyl and autographed by the band plus download card sent to your address, your participation acknowledged on the band's social network (Facebook, twitter, bandcamp). .

An autographed copy of the album sent to your address, two tickets to an upcoming concert, plus your participation acknowledged on the band's social network (Facebook, twitter, bandcamp).

An autographed copy of the new album, two 'Wonderful Circle' t-shirts (sizes male, female, child available), two tickets for an upcoming concert and your participation acknowledged on both the band's social network (Facebook, twitter, bandcamp) and on the cover of the new album.

An autographed copy of the new album 'Wonderful Circle', a copy of the first album 'Dig for Victory' and of the three-track EP 'Disappearing World' on vinyl + download card, two 'Wonderful Circle' t-shirts (sizes male, female, child available), two tickets for an upcoming concert plus your name among the contributors on the band's social network and on the cover of the new album.

A fantastic gift! For which THANK YOU!! All three records - first album 'Dig for Victory' , EP 'Disapearing World' and new album 'Wonderful Circle' on vinyl and autographed by the band, two t-shirts (sizes male, female, child available), the chance to attend a band rehearsal plus two tickets for an upcoming concert, your name among the contributors on the band's social networks (Facebook, twitter, bandcamp) and on the cover of the new album.