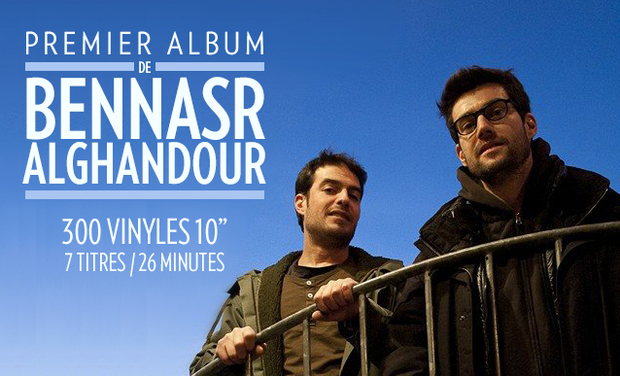 BenNasr AlGhandour is a two piece band formed in 2012 by Damien BenNasr (guitars) and Adrian AlGhandour (drums). The group, which ranges between math, rock, punk and hardcore delivers incisive and demanding music based on groovy rythms. After a first EP, "Le bruit isole" (Diptyque  Records) released in 2013, and about thirty concerts across France, including openings for Unicornibot , Gâtechien or Anorak, the band decided to tackle his first album for 2015 .

You can already listen the whole of it here : https://bennasralghandour.bandcamp.com/

We’re seeking for financial support, or support of any kind, or kind regards in order to print it on 10” vinyl.

The artwork by Thharm, is already done :

Do not hesitate to contribute according to your ressources and feel free to share this project !

Abdul Alhazred has seen the Unspeakable but has not heard the Sound.

From the Mediterranean shores to the turbulent undergrounds of Arabian deserts, the call turns into a howl. They say ears bleed, sliced clean, when hearing it. Only remain the dark groove and a hot breath up your  backbone. And the rythms that would drive mad each and every soul.

BenNasr AlGhandour incarnates the Sound : some endless post-you-name-it, a bit of spasmophilic afrobeat, seasick grooves and stories that ends in a desert…

A few words about the guests on the album :

Yujim (Vocals on "Fade To White")

After the first stage we shared together, it was obvious YuJim had to collaborate to this record. Accomplished musician and chameleon singer, he's enlightened this traack with his talent.

Old-time friend of the band, FC, who's also bassist in the band Geste and has a solo project with machines, has given all its electro potential to this track.

There's no way you could escape him if you hang around Porte de Montreuil late at night ! A few rehearsals after, Thharm gave us his best trash-noise bayou-based violin lines for this track.

If we overcome the objective :

Production of a music video