A comedy that you will be proud to produce! 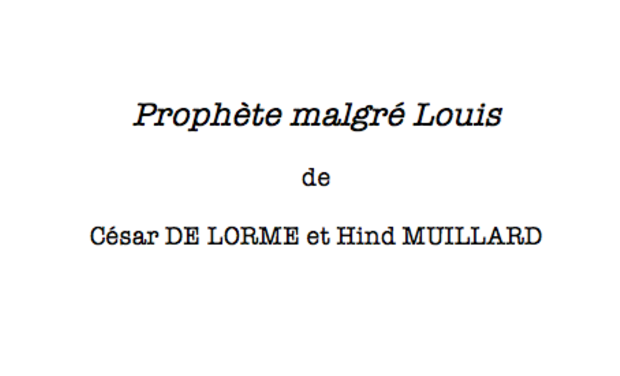 A Prophet called Louis is an original comedy written by Hind Muillard and myself. The shooting will take place in May and today we need your help to finance it!  The 5 minutes film will be shown to famous french director Luc Besson in jun.  We also plan to send the film to various film festivals. The movie tells the story of Louis, a young man, who becomes a prophet overnight. He is then trained by the 4 traditional and emblematic prophets.

Here is an overview of my previous work:

All is welcomed! These 5 euros will send your name in the credits!

Thank you ! We will give you access to a private link before the official film release. + your name in the credits!

Great ! We will send you the script by email so you can know the story before everyone else! + all the gifts above.

Lucky you! You will have access to the secrets of the film: we will send you a private link to the making-of video. A video showing you how the film wa made + all the gifts above.

We're becoming serious. The official DVD of the film will be sent to your house! It will include the film and more bonuses! + all the gifts above.

Now we're talking! With the DVD, we will send a hard copy of the script signed by the two authors with a personal thank you note. + all the gifts above.

Such class! You will be invited to the premiere of the film! You will be one of the first to see it and your opinion will help us to improve it. You're becoming a real producer now. + all the gifts above

Take part of the film! Come one day on the set to see us work! You will also be invited at the end-of-shoot party and the premiere of the film! + all the gifts above!