Help us to finance the first edition of "When artists meet" which is going to take place in Zimbabwe in Novembre, 2016. 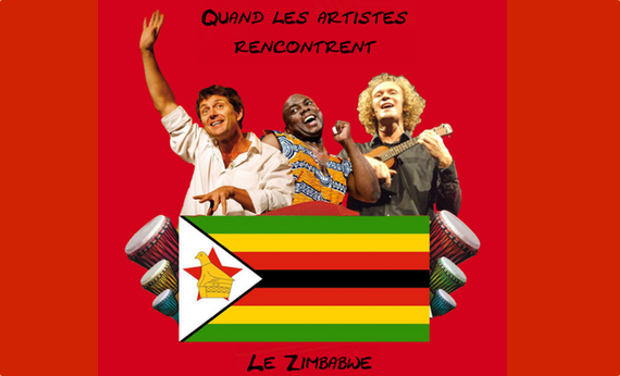 Through the medium of cultural arts, our project brings emotion, goodwill and comfort to a population that has suffered long periods of drought. In the Northern parts of Zimbabwe were natural resources are scares and living conditions for rural villages people challenging, we will be creating a festive spirit of mutual exchange between professional artist from Europe and local Zimbabwean village people. A programme of theatre, circus, song and dance. Basically a very special moment of cultural magic…

On arrival in the villages, the European artists will conduct workshops and performer for the village people. The project is a mutual sharing were artist share their humour, music and circus skills.

In a playful and improvised manner, the artists offer educational activities to further develop the talents of the youths, with the intention that they can express their own creativity through their bodies, their imagination and their stories. The day will end on a high note were all will come together, artist and village children perform as ONE, bring pleasure and joy to the whole local community.

A collaboration with Rire78 (a non profit organisation) and Eric Bouvron, theatrical globe-trotteur.

Rire78 has been in operation for several years and is registered under French law 1901 78 as a non-profit organisation. It designs shows with multidisciplinary artists and is the origin of the movement “Rire pour guérir” (Laugh to heal). Artists give performances in hospitals and clinics. Rire78 also conducts and organises cultural activities in schools, delivering workshops, singing, performance art, theatre and dancing. The objective of these actions is to bring a little comfort and happiness in schools, hospitals and in small towns where people do not have the privilege of having access to such things like this.

“When I was a child in South Africa, good and caring individuals opened the door to the world of performing arts for me. Thanks to them, I practice my art with great happiness and fulfilment. I have not forgotten them. Today, it is my turn to open doors for children, in Europe and in Africa, in schools and in the bush.

A drop of confidence can change the life of a child: a confidence can then have a huge impact on others. I grew up in Africa and I live in France. My dream is to break down cultural and geographic barriers, by coming together, with artists from Europe and with the people in the African communities, and sharing a few moments of joy and cultural exchange. And I will go further, what is important for me is to encourage young people’s innate talents and to develop their self-confidence, regardless of their nationality, background or education.”

Eric Bouvron brings his commitment to art and cultural development that transcends borders. A strong experience and savoir faire were in 2012 he participated and animated the cultural project TV series, "a tourist in my tribe" : a series of reports for Fox TV and the Travel Channel. Eric’s mission was to travel to different countries, each time staying with the local tribes for several days. The destinations included Senegal, Mongolia, Madagascar ...

His last visit to South Africa was a long life dream. His mission was to inspire children of Kliptown (Soweto) and help them come to France and share their talents with other young people. His shows and contribution amplify the pleasure of sharing: the daily life of local communities and simple human exchange.

In 2013 with the project "Arc-en-Ciel – A Tribute to Nelson Mandela”. An event organized as part of the Seasons South Africa -France.

We selected renowned artists who know how to make people dream and have a particular sensitivity to other cultures and countries. Thanks to their talent, their multicultural backgrounds and their adaptability to fit to all situations !

Actor, director and author, Eric Bouvron was born in Egypt to a French father and a Greek mother and it was in South Africa where he grew up! Two of its main creations speak of Africa "Afrika! My Rainbow Sky Country "evokes the splendour of South Africa and" Bushman “ speaks of the sweet and curious Bushman people among whom he lived with in Namibia. Eric made two trips in the Kalahari Desert to learn about the traditions and lifestyle of the Bushmen. He animated workshops / meetings with children in the villages and performed clips of his show. He also travelled to Greenland to write and produce the show  "On the Ice Cap – the Mission of Victor Mulot". He organized a workshop with children in a local school in Kulusuk and was met by the Eskimos to learn their culture and customs.

Immo, a motorcyclist, plays the saxophone, while juggling with tennis balls in his mouth. This German clown keeps surprising us. A skilled street artist and public performer, he has traveled the world with his spectacular shows (Europe, Canada, United States, Colombia, Panama, Nicaragua, Djibou, Czech Republic, Georgia ...)

"This is a multidisciplinary genius, the showman has a surprising talent. "He loves to teach others his subjects: he taught juggling, circus and theater in various countries including Nicaragua and Colombia.

Born in 1961 in Congo Brazzaville, Mathos since the age of 6 (troupe of acrobats "Black Lions" of Brazzaville) has had an overwhelming  enthusiasm for the show. Spotted by the National Ballet, he joined the cast: Albert M na National Ballet Director.

His theatrical and stage evolution has taken him through different countries with Fifi Ballet, the Ballets de la Cité and the National Ballet of Congo, where he was voted the best dancer. He has also been to Cuba, Chad, Zaire, Senegal, Germany, Italy, China, Japan ... and has now decided to put settle down in France. He opened his first dance class in Paris in the early 80s, then began working in social centers and activity centers for young people. He is always present in the schools where he speaks of his Africa, as he has known it: the proximity to land, ancestors, rich soils, plants, the power of music and dance, which are essential growth engines for the local economy and youth.

Thanks to the Crowdfunding initiative "When the Artists meet ...”, we will be able to raise the first part of the funds to simply allow us to see the day in Zimbabwe!

Overall, we would use the funds to pay for the travel of the three artists, plus a photographer to capture the special event.

And if everyone believes in this trip as much as we do, any additional donations will be entirely carried over the Part 2. We are already preparing “When Artist meet South Africa and Namibia”.

A big thank you on our social networks !

Your name on the official poster of the event + previous reward.

Your name credits on the video clip generic that we are gonna film during the event + previous rewards.

Photos from the event + previous rewards.

The "Behind the scene" video from the event that you will receive in a private link + previous rewards.

2 invitations for one of the gala that we organize to promote the event + previous rewards.

Meeting with all the staff from "When artists meet" + previous rewards.