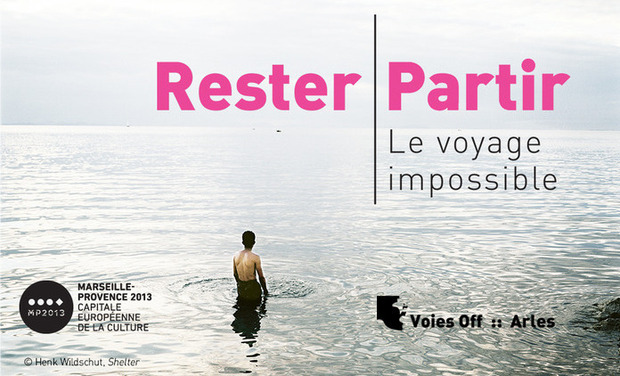 Since its creation in 1996, every year in early July, the Voies Off Festival commits itself to emerging talents, by providing them a forum of international fame during the Rencontres Photographiques d’Arles.

From july 1st to 6, the 18th edition of the Voies Off Festival is the highlight of an annual program developed around the theme «Staying Leaving :: The impossible travel».

Especially awaited by the public and the image professionals, the Nights of the Voies Off Festival will be the opportunity to explore this theme through two proposed audiovisual creations, presented in a preview showing,as welle as through a cycle of photographic exhibitions at the Voies Off Gallery throughout the year.

Today, we are in need of ways to bring young emerging artists and curators of the Mediterranean countries. The Staying Leaving creation is based on the contribution of them all, and we can not imagine the Festival and night showings without their presence.

At the heart of contemporary issues of migration, identity and introspection, this program is the occasion to research the movements of the soul, body and societies.

Steeped in the history of peoples and cultures, the theme questions the political, economic and social context, relations between men and women, between individuals and their professions, between north and south. It helps to approach this paradox that demonstrates a border, sometimes on the outside, often on the inside, which is summed up inside the opposition of these two words: stay / leave.

TWO AUDIOVISUAL CREATIONS AND A CYCLE OF EXHIBITIONS

A group of collaborations has been established between artistic structures and Euro-Mediterranean curators: Nova Akademija in Belgrade, Serbia The Khaled Hafez Foundation in Cairo, Egypt Festival Encontros da Imagem in Braga, Portugal Independent commissioners in Turkey ...

In direct collaboration with Christophe Laloi, artistic director, their research will lead to several showing sequences of photographs that meet or oppose between coherence and diversity.

VIDEO ART :: THREE OF US

Since 2011, Voies Off accompanies Brigitte Bauer in the creation and production of Three of Us, creative documentary from and about photographs, with and for photographers, designed and created by a photographer.

"The idea of the film Three of us was born from my encounters with three young women photographers and their cities: Marseille, Cairo, Belgrade. The title suggests an inclusion in possible communities: photographers, women, neighboring cultures.

Maude, Marwa and Branka belong to the same generation, they are around 30 years old. Although their artistic projects are largely fed by their personal itinerairies, it is beyond each individual story that the film raises more widely the question of the relationship among personal, artistic and political. "

A CYCLE OF EXHIBITIONS

Throughout 2013, the Voies Off Gallery programs a cycle of exhibitions questioning these same migration and identity issues.

In January 2013, the exhibition of the works of Hai Zhang, Don't Follow Me, I'm Lost, was presenting the look of a Chinese expatriated in the United States on the constant and sprawling evolution of the urban landscape of his homeland . In March, Henk Wildschut was proposing Shelter, a photographic documentary project about refugees in Calais, France. From July 1st  to September 22, the Gallery welcomes Yusuf Sevincli and presents images from his series Good Dog, in collaboration with the gallery Les Filles du Calvaire. A final exhibition is scheduled for autumn 2013.

Yusuf Sevinçli develops a picaresque concept of photography, an artistic approach made ​​of instability, of wandering. The artist does not linger. He walks, he explores, he observes and he leaves. He takes almost compulsively slices of reality always different, but slowly come together like pieces of a puzzle, revealing the material that is the representation of reality through the eye of the artist.

Voies Off has commited itself to an incredible human adventure, artistic and international, that is financially beyond us.

You can now allow us to give this adventure the full extent of what it deserves. Thanks to your support, this artistic project will come to life and we will be able to welcome in France foreign artists who participated in this work.

We need your help to allow the travel of artists, to welcome them in the right conditions and to share together an international culture.

If you help us reach our goal, you can come and enjoy yourself in this exceptional program Staying Leaving and also see the result of your contribution. You can participate in the night showings of the Voies Off Festival 2013 and meet the artists for whom you allowed the transport and presence at this major event for photography.

Sharing is the purpose of this project.

· Residences and transport of the author and artists: 7.800 €

Selection of 6 Postcards "Staying Leaving, the impossible travel" + A guided tour of the exhibition of Yusuf Sevincli at the Voies Off galerie, Arles + previous rewards

An appetizer with the team of the film Three of us on the previews showing night at the Voies Off Festival on July 2nd, Arles + a bottle of champagne offered during the Festival, from July 1st to 6, Arles + previous rewards(one of the two prints to choose from)

"Discovery Weekend in Arles" at the next opening at the Voies Off Gallery in October 2013 for two people from France (transport from France, two nights hotel accommodation in the historical center)

Become a sponsor of the Festival, enjoy a privileged customized reception and display your name or logo on our communication supports