Help to finance "MINGLING WITH MOLIÈRE", new show of the Footsbarn Theater! 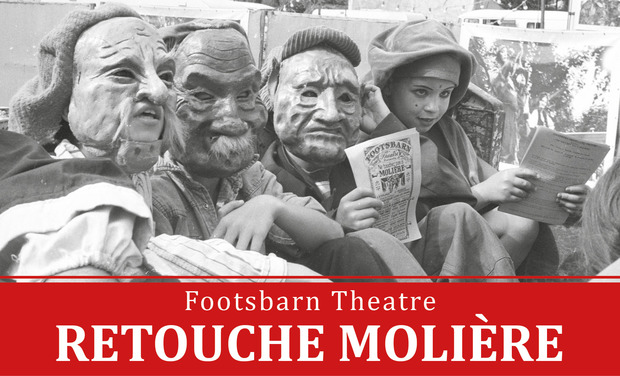 Does your daily life seem dreary? Footsbarn Travelling Theatre's new production is JUST what you need.

Do you open your door every morning hoping that adventure is just around the corner? Do you dream of romance and travel ?

A Journey through  the most stirring, hilarious   and the most insolent of the farces of Molière

Hugely popular since Ancient Greece, this freely improvised theatre  form uses satyre to target local dignitaries and politics. The cover of laughter allows for a great many things to be said that would otherwise seem to risqué.

In our time when improbably farcical figures have been democratically elected to powerful positions, it seemed a good time to produce such a form.

He speaks of love, business and politics whilst drinking glasses of white wine.

Expertly exposing our weaknesses, he shines a teasing and affectionate light on the mechanisms of Humanity.

WHAT IS THE PROJECT?

The idea is to produce a lively and spirited show, light as an emu's feather which can be performed  in  market squares or in festivals, with its autonomous set  of benches, stage and lights, continuing Footsbarn's tradition of taking theatre to far flung  audiences  where there are no theatres.

It would include two farces :

Full of doubts  on the wisdom of this marriage, he embarks on a personal odyssey, questioning everyone he meets, philosophers, gypsies and friends, who in turn give him more and more confusing advice. This caustic and candid masterpiece offers an incredible palette of truculent characters and  tragi-comic situations.

- The Jealousy of the Barbouillé -

In a way a sequel to the forced Marriage. The main protagonists are wedded but the husband is full of doubts as to the faithfulness of his wife and seeks to lock her out of the house. However his wily wife turns the situation to her benefit.

True to Its long tradition of producing shows on a shoe string, the international Footsbarn Travelling theatre, born in 1971 in Cornwall, and installed since 1989 in Maillet, in the department of Allier, is adept   at creating masterpieces out of very little.

An actor is better if he eats during rehearsals ; lovingly cooked meals will feed his inspiration as well as his belly.

Besides, an actor is better if he comes on stage a tad dressed. This protects the public from the risks of indecency.

Furthermore  an actor is better if put in the middle of a set. It avoids him getting lost in the wilderness at each performance.

What's more this set is better if you can transport it with a vehicle, it avoids breaking the backs of naked, malnourished actors.

You will have noticed  in recent times, the powers that be are more focused on the well being of their own family and the quality of their wardrobes - and we understand them perfectly - than on the perpetuation of the artistic presence and creations on their territory.

Footsbarn travelling Theatre is one of the world's leading touring companies performing for the most part in its circus big tops but also in theaters throughout the world. Renowned for its exciting adaptations of classics such as Shakespeare & Molière, the barrier of language with its unique blend of visuel theatre, music and magic. In forty-six years, Footsbarn has produced nearly 60 plays and traveled to the six continents and is a truly multi-national group. The actors possess a multiplicity of talents and theatrical techniques all of wich unites and enrichies every performance. Footsbarn in 1971 reearsing in a barn owned by the Foot family, hence its name. In 1984, the company left Britain to take its brand of the theatre to international all audiences and remained without a base until 1991.

Today it is a fully equipped production center with workshops, rehearsal space, office and studios but also a centre for education. Over the last 15 years Footsbarn has organized and staged numerous workshops, which have been taught by both actors as well  as professionals associated with Footsbarn.

For MINGLING WITH MOLIERE, the team will be composed of 6 actors and 3 technicians.

This new creation will be largely self financed by our own funds and our grants. Nevertheless, this does not cover all costs... And that's where we need you ! Our association, Footsbarn travelling Theatre, will receive the funds. The money we are asking for will essentially be used to :

This is our minimum goal. If the collection exceeds the amount requested, we will be able to carry out the maintenance of the touring vehicles (2000€) in order to go to the places of show.

Obviously, the more the envelope will be filled with your generous gifts the happier we will be !

Help us to keep the itinerant theater in France !