Get into the head of your favorite athletes and pro-gamers! 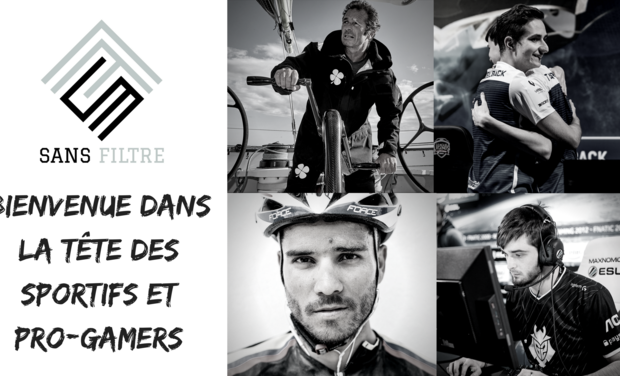 Sans Filtre is a new media present on the web and social networks that features stories of athletes and pro-gamers in the first person.

At Sans Filtre, we want to go beyond the performer and focus on the human to allow fans "to (better) know their favorite athletes through exclusive content thought and created by them."

Did you know that the french NBA player  Boris Diaw is an accomplished photographer? That the Manchester United player Juan Mata gives away part of his salary to charities? No.

On the other hand, you know the amount of Neymar's transfer to PSG, the intimate escapades of Tiger Woods or the latest buzz in the sports industry. As fans and compulsive consumers of sports-branded content, we quickly had to face the fact that it was hard to find our happiness on the web apart from results, game summaries or interviews often superficial, too mechanical and too conventional from the players.

In France, journalists have a tendency to talk about the money in the sports industry, players’ bad behaviors, and to criticize everything they can without being constructive.

However, in the Anglo-Saxon countries, the reality is very different: sport is not only treated in a negative or accounting aspect (results) and the articles have much more substance. Athletes appear deeper and more authentic. So, together, we said to ourselves: why not create this media we dream of?

It was therefore necessary to create this media which corresponded to us but which would especially answer the sport fans’ expectations. Before we started, we made an inventory that allowed us to objectively identify the defects of the media market on the web:

- The enormous journalistic barrier between athletes and readers.

- The negative image of athletes who are seen under the prism of money or bad behavior in the media.

We had to break this journalistic barrier with a new media where journalists would fade for the benefit of the word of the athletes. We wanted to offer a platform with stories of athletes in the first person. In March 2017, Sans Filtre was born in our heads and was born on your screens a few months later.

Sans Filtre for us has several meanings:

- Possibility for athletes to speak on topics of their choice without being influenced, neither in the choice of the subjects nor in their answers; no cut or restriction in terms of length, whether the article is 1000 or 8000 words.

On Sans Filtre we find written content & videos on their path to get to the top level, their passions outside of sports, their associative & humanitarian commitments, their societal positions and of course sports-related topics in which athletes share with the reader what they feel at the time of a competition.

Regardless they are, men, women, disabled, valid, what matters is the message of each one.

We attach a particular interest in the world of eSport by trying to make known the players (progamer, manager, coach, caster, influencer) of the competitive games like Fortnite, FIFA, League Of Legends, CS: GO ...

Since the beginning of the adventure, more than 100 athletes and pro-gamers from 25 different disciplines have already expressed themselves on Sans Filtre. Talented personalities such as Sandrine Gruda, Eugenie Le Sommer, Cédric Sorhaindo, Benjamin Nivet, NBK, Nisqy, Brak and Jean-Baptiste Alaize, as well as legends such as Malia Métella, Serge Betsen and Imanol Harinordoquy.

The beautiful adventure Sans Filtre would be nothing without athletes & pro-gamers support but especially without the popular support!

So we are launching this appeal to all fans of unusual stories and people who would like to see other forms of expression emerging in the media world. French sport has never been so covered and broadcoasted but perhaps not in the most qualitative way possible and it is the ideal moment to bring a touch of humanity behind the accounting calculations or the superficial vision too often conveyed.

It would be a nice boost for Sans Filtre and the opportunity for you to live from inside such a project!

Sans Filtre thanks you in advance for your confidence in our work and the support you can give us.

With your help, we can continue to develop as professionally as possible Sans Filtre and continue our projects in progress.

With this fundraising we will be able to launch a video section to have stories even more immersive! Create new formats written for the web platform! Innovate with specific content for our social networks!

As a picture is better than a long speech, here is how these 10,000 euros would be used:

And if you allow us to exceed this level of 10,000 euros, we do not answer any more but we already have some projects in mind!

2nd TIER - 20 000 euros: You allow Sans Filtre to create the latest generation application to miss any story on your smartphone + total redesign of the site to allow better ergonomics and new opportunities for interaction between you and the sportsmen / pro -gamers.

3rd TIER - 50,000 euros: You allow Sans Filtre to go even further in the creation of sports documentaries but also to help recruit an editorial specialist or a community manager.